Less than three months after Finance Minister Pranab Mukherjee announced the budget on February 28, his calculations seem to be going awry. Mukherjee had projected that the fiscal situation would markedly improve in the current financial year. Targeting a 12.5 per cent decline in subsidies and a less than four per cent rise in government spending, Mukherjee projected a fiscal deficit - the difference between the government's spending and its revenues - of 4.6 per cent of GDP for 2011/12, down from 5.1 per cent of GDP in 2010/11. The Finance Bill for Budget 2011 is yet to be passed by Parliament. Finance Minister Pranab Mukherjee
Though the aggressive target for fiscal correction set in it earned Mukherjee's budget much applause - industry leaders and Dalal Street hailed him as India's "chief reformer"- some analysts had pointed out that his calculations could be based on unrealistic assumptions. Most important amongst these was that global crude and commodity prices would remain throughout the year at the same levels that they were when the budget was being prepared.

Not surprisingly, the assumption on crude prices has already failed to play out. The Reserve Bank of India's Governor Duvvuri Subbarao told BT in an interview in early May: "The finance ministry had set the targets in end-February and the oil prices situation was different then from what it is today. Certainly, there is doubt about whether those fiscal targets can be met under the current price scenario unless some adjustments are done to administered prices." 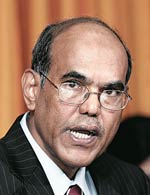 There is doubt about whether fi scal targets [set in the budget] can be met under the current price scenario: Duvvuri Subbarao
A slippage in fiscal deficit will impact the management of inflation. "The fiscal deficit is one of the variables that affects demand and thereby inflation management," Subbarao had told BT. The RBI has been fighting inflation for over a year now, repeatedly raising interest rates, but without much success. Despite nine back-to-back rate hikes since early 2010, the rate of core inflation in April 2011 was eight per cent, which a Ministry of Finance statement said was "not the kind of inflation figure that Mukherjee is comfortable with".

"The Finance Minister said that there will be some impact on overall inflation due to the adjustment in the petrol prices effected by the oil marketing companies in the coming months," the statement added. The RBI is not the only agency skeptical of Mukherjee's budget projections being on target.

"With the government's deficit target of 4.6 per cent of GDP for FY12 based on a 12.5 per cent decline in subsidies, we could see the deficit inch to 5.5 per cent due to higher food, fuel and fertiliser subsidies," Rohini Malkani, Economist, Citigroup India, said in a recent report.

The budget's fiscal correction hinges on the government spending rising less than four per cent over that in 2010/11. As noted earlier, the lower spending projection was not due to some fierce belt-tightening by the government, but based on assumptions that global petroleum product and fertiliser prices would not rise from the level at the time of drafting the budget.

So, at a time when crude oil prices were hardening on the back of a political crisis sweeping West Asia, Mukherjee set the fuel subsidy bill for the current year 40 per cent lower than in the previous year. Global prices are pushing up the fertiliser subsidy bill, as is food inflation. Fertiliser subsidies account for 45 per cent of India's total subsidy bill, and have risen from Rs 13,200 crore in 1999/2000 to Rs 50,000 crore in 2011/12. In 2010, the government reformed the subsidy regime for fertilisers but how much this will be able to ease the pressure on the fiscal deficit remains to be seen. We could see the deficit inch to 5.5 per cent due to higher food, fuel and fertiliser subsidies: Rohini Malkani
Despite the attempt at streamlining the fertiliser subsidy, Mukherjee, as the head of the Groups of Ministers overseeing most reforms that have a bearing on the fiscal deficit, has failed to evolve a consensus on the deregulation of diesel and the rationalisation of the food subsidy. Both these are inefficiently targeted and thus keep demand artificially high and strain the exchequer, fuelling inflation. The government has not announced a single policy measure directed at reducing the fiscal deficit.

Finance Secretary Sushma Nath had told BT on the evening Mukherjee presented the budget that the finance ministry was relying on the buoyancy in tax revenues to see the budget calculations through. But with rate cuts projected to slow down GDP growth and expected to be in force until inflation cools off, tax collections are expected to come under pressure too.

That the finance ministry might have been unrealistic in its approach to fiscal correction, thereby seriously hindering inflation management in the country, was hinted at by Prime Minister Manmohan Singh. Minutes after Mukherjee's speech ended in Parliament, Singh said in an interview on state-run television channel, Doordarshan "…We cannot be too certain that …the arithmetic will work the way we want it to work. We must have ample scope to contribute to fiscal consolidation." Question is: why has the Ministry of Finance not acted on Singh's advice?