Business class travelling is making a comeback with two new full-service airlines set to take off and existing carriers turn their focus to premium. India is not the only country where business class in air travel is making a comeback.

The aviation sector seems to have come a full circle. After about seven years of growing preference for low-cost carriers among air travellers, the business class is making a strong return as existing airlines as well as two upcoming full-service carriers focus on the premium segment.

Take Delhi-based Air One, for instance. In July, the aviation service provider received a licence to operate a full-service airline in India. Its Promoter and Director, Alok Sharma, an industry veteran and former president of Air Sahara, says the return of business class is nothing new to India. "Most countries go through this cycle. There's a market for both types of services," he says.

India is not the only country where business class in air travel is making a comeback. Developing countries such as Thailand, Malaysia and Indonesia have seen similar trends in the past. Still, the share of business class travel in India's total aviation pie is minuscule. According to the research and advisory firm Centre for Asia Pacific Aviation (CAPA) India, the total weekly domestic seats for August stood at 1.84 million. Of this, only 64,540 seats, or 3.5 per cent, were in business class and the remaining were economy seats. Analysts say the entry of new players will increase the number but the overall percentage may not rise much because low-cost carriers also have expansion plans.

"There's definitely demand for full-service airline segment. The two biggest full-service airlines, Jet Airways and Air India, have seat [load] factors in high 70s. Their market shares in September 2014 were 20 and 17 per cent, respectively," says Amber Dubey, Partner and India Head of Aerospace and Defense at global consultancy KPMG. Seat load factor is an industry term which refers to the percentage of seats occupied in a particular time period as compared to the total number of seats available.

Besides Air One, another full-service airline that has taken the plunge is Vistara, a joint venture of Tata Sons and Singapore Airlines. Vistara had plans to start operations by October but is awaiting approval from the Directorate General of Civil Aviation. The airline has already taken delivery of two planes - Airbus A320-200 - and has plans to operate 20 aircraft, including some A320neos, by the end of five years of operations. Vistara management is silent on the plane configuration, but it is believed that around 35 per cent of its seats will be business class and premium economy.

"We carried out an in-depth consumer research to gain valuable insight. From the research, we learnt that air travellers are in an emotionally vulnerable state. Travel today is more functional instead of being experiential and travellers are made to feel like just another seat number," says Phee Teik Yeoh, CEO, Vistara. He adds that full-service is more than just a meal on board. "Once the guests experience the seamless travel, they will surely discover the value that Vistara offers," he says, without revealing details about the airline's differentiated offering.

Nevertheless, experts are closely watching Vistara because of the two heavyweight names which are backing the airline. Tata Sons holds a 51 per cent stake in Vistara's owner Tata SIA Airlines Ltd (TSAL) while the remaining is owned by Singapore Airlines. 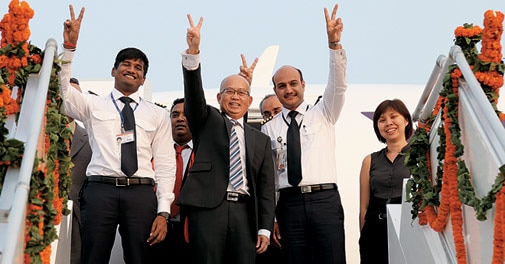 Phee Teik Yeoh, CEO, Vistara (middle), with the first A320 aircraft
While the new airlines are expected to take off soon, the existing players are also ramping up their business class capacities in anticipation of latent demand. Jet Airways, GoAir and SpiceJet are betting big on this segment.

In August, Naresh Goyal-led Jet Airways announced that it will discontinue its no-frills brand JetKonnect and transform completely into a full-service carrier from December. The single-brand entity Jet will offer premium seating, lounge passes, and higher baggage allowances than competitors. The airline had in March 2012 rebranded its two low-cost services JetLite and JetKonnect as JetKonnect.

SpiceJet, another low-cost carrier, has introduced SpiceMAX, a product under which the airline reconfigured most of its Boeing 737 fleet to give extra legroom in the first five rows - at least six inches more legroom compared to standard seats. A SpiceJet executive says: "The airline does not have business class, but it is certainly focusing more on corporate customers than before. Over the years, we have learnt that while customers are not always willing to pay the huge premium for business class, they would be happy to pay a little more for greater comfort and convenience in economy class."

What's causing the rise in demand for business class seats? Some believe that there's latent demand for business class travel that low-cost airlines have not been able to serve. Also, analysts say corporate travellers are more willing to fly business class today comparison to, say, three or four years ago. While there are no official estimates, more than 60 per cent of the overall aviation demand is estimated to be generated by the corporate sector where improved business sentiment is prompting companies to loosen their purse strings on travel-related expenses. Also, some initial spurt in business activities and increased optimism over the past few months as improvement in economic conditions is making the corporate mindset a little more relaxed towards peripheral expenses.

Vijay Deshpande, Vice President and Head (Human Resources) at JK Tyre & Industries, says austerity measures introduced by companies when the economy slowed down in the past couple of years are gradually being withdrawn. "Several companies, including ours, are lowering such restrictions. In travel-related matters, we leave it to the discretion of the head of various functions. Each function has an annual travel budget which is directly linked to business performance. If the top line goes up, the travel budget also rises," he says.

Corporate travel is picking up but a large number of companies allow their executives to fly business class mostly on international routes. For both the new airlines, that's another challenging area because existing rules do not allow them to fly outside of India until they complete five years of operations and have a fleet of 20 aircraft. Air One's Sharma says he is waiting for the government to do away with this regulation. "As soon as that happens, we will launch our airline," he says.

Also, flying scantily-occupied aircraft to remote locations as part of the India's route dispersal guidelines will hurt these airlines. Under these guidelines, all Indian carriers have to deploy a minimum of 10 per cent of their capacity to connect remote destinations that are not commercially viable.

The first few months are going to be exciting, says KPMG's Dubey. "Initially, there may be a lot of traffic due to the novelty factor but sustaining a full-service model in the Indian market would be an interesting challenge for the newcomers," he says.

To begin with, the routes have to be chosen carefully based on a demand analysis. Otherwise, the airlines might find themselves flying with a handful of passengers.

The Indian aviation sector is known to be ruthless to companies which do not pay attention to the cost analysis and efficiency improvement. Take the case of Kingfisher Airlines and Paramount Airways. Kingfisher started with much fanfare in 2004 but later ran into a series of troubles that ultimately resulted in its downfall. Paramount, which was largely a business class carrier, lost its airline licence in 2010 after it was unable to repay its debt.

In fact, the launch of Kingfisher Airlines came at a time when the business class was seeing its first biggest uptick in the country. During early 2000s, the economy was firing on all cylinders, corporate and leisure travel was growing at a stupendous rate. However, there were not many players to cater to the rising demand. The market was mostly divided among state-run Air India (and Indian Airlines), Jet Airways and Air Sahara, all of which were full-service carriers. It was only in 2003, when Air Deccan entered the market as a low-cost carrier.

Kingfisher Airlines, which kept its fares low, adopted characteristics of a traditional full-service carrier. In 2007, Jet completed the acquisition of Air Sahara. This was followed by Kingfisher acquiring a controlling stake in Air Deccan. Both acquisitions turned out to be failures. It was then that low-cost carriers such as IndiGo, SpiceJet and GoAir took control of the aviation market.

After years of lull, business class travel is making a comeback. Some skeptics believe that existing market dynamics continue to favour low-cost carriers. Moreover, the difference between the economy and premium economy segments of full-service and low-cost carriers is not enough to justify the price difference. Unlike other countries where full-service carriers and low-cost airlines fly from different airports, business class travellers in India get access to just exclusive airport lounges.

"The business class capacity has significantly reduced in the last few years but due to changes in strategy of Jet [Airways] and Vistara, the capacity increase is now visible," says Kapil Kaul, CEO (South Asia), CAPA. "It will be very competitive going forward. I think business class traffic will remain limited."

How eBay India is helping small cos sell products