Until he visited Asian Paints's kaleidoscopic 'signature store' at Bandra in northwest Mumbai recently, media professional N. Rohan, 30, had no idea that so many colours, each one with its range of tints, shades and tones, existed. "I did not know there were so many textures to choose from, or that the same colour looks different under yellow light than it does under white," he says. Rohan has yet to make up his mind, but feels he might well choose the brand called Royale Luxury Emulsion for his 900 sq. ft. apartment, which he wants to get painted.

Royale Luxury costs around Rs 450 to Rs 500 a litre and offers a choice of 1,800 colour varieties. Rohan is a typical example of a new kind of paint customer.

"Earlier, it was mostly people above 45 who chose types and shades of paints," says S. Sarda, Executive Director and CEO, Shalimar Paints. "But that is changing now with more young people owning apartments and taking such decisions." 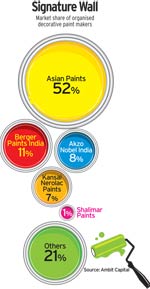 Click here to Enlarge
Demand for premium products has been increasing as buyers become more aesthetically aware, and realise that the paint on their walls is as vital a feature of their homes as the television set or the couch.

Premium products account for a fifth of the country's Rs 13,200 crore organised decorative paints market - one which has been expanding at about 28 to 30 per cent annually for the last four years. In comparison, sales of economy and midtier paints are growing at 10 to 15 per cent annually.

Premium paints are mostly emulsions. They dry faster than economy or mid-tier paints, which are oil-based, and also do not smell as bad when wet. Indeed, the latter's odour can cause breathing problems, as they are made up of volatile organic compounds that have low boiling points and turning into gas, diffuse into the atmosphere.

Stains on a premium painted surface can be removed with water, the brush strokes hardly show after painting. Such paints are also less affected by weather changes. Naturally, they cost quite a bit - at least Rs 150 per litre, or more.

The new trend suits paint companies very well, since premium products offer 10 to 12 per cent higher margins than the economy or mid-tier variety, says an Ambit Capital report released this July. They have been quick to start cashing in. Asian Paints and Kolkatabased Berger Paints India, for instance, are both changing their product mix.

Premium paints will account for about a third of the product mix of Asian Paints within three years - at present, they comprise only a quarter. Berger Paints aims to raise the share of premium products to 14 per cent from 10 per cent now.

Click here to Enlarge
To push sales of premium products, companies are setting up exclusive outlets for them, such as Asian Paints's signature stores or Kansai's 'Nerolac Impression Style Zone' outlets.

"The sale at these outlets is twice as much as at multi-brand dealer outlet," says Sukhpreet Singh, Vice President, Sales and Marketing, Kansai Nerolac Paints. That is hardly surprising.

"The interaction level between consumers and sales people at these exclusive outlets is much higher. We can explain the features of premium paints which a dealer may not," says Abhijit Roy, Managing Director, Berger Paints.

Akzo Nobel, which owns Dulux Paints, is primarily a premium player, and has more than 100 franchisee-run 'Dulux Decorator Centres', which are equipped with software tools like the one called Margherita, used to show customers how colours will look like when mixed, and thereby help them make choices. Other companies also offer such 'colour consultancy'.

"We do it for free at our two signature stores," says Amit Syngle, Vice President, Sales and Marketing, Asian Paints.

Websites of companies also allow clients to choose colours online, and even calculate how much getting their homes painted will approximately cost them.

The dealer outlets selling all brands are not being neglected either, especially in Tier-II and Tier-III towns, where setting up exclusive stores may not be viable. Asian Paints has 'Colour World' stores among multibrand dealer outlets, while Kansai Nerolac has kiosks in 200 hardware stores.

The interaction level between consumers and sales people at the exclusive outlets is much higher.

Another strategy adopted for the last four years or so is that of offering home painting services for those who buy a company's products. Once the customer has zeroed in on his choice of paint, he need no longer hire a contractor for the paint job, but can instead get it done by the paint company. Asian Paints provides this service in 13 cities, Akzo Nobel in six; Berger offers it in 14 and plans to expand to five more by March 2013.

Sunil Gupta, a hosiery manufacturer in Delhi, recently got a 300 sq. ft. room in his house painted by Berger's painting service. "I chose Berger Silk, a luxury emulsion. The company took just a week and charged me Rs 20,000. Had I gone to a contractor I may have saved Rs 5,000, but here the finish is much better," he says. Though the painting service is not necessarily exclusive to those who opt for premium products, Berger's Roy says those who opt for this service tend to prefer high-end products for their walls. Abhijit Roy, MD, Berger Paints
Manufacturers are spending more on advertising their premium products too. Berger, for instance, spends over one per cent of its revenue on advertising and showcases only premium paints on television. "Our approach is driven heavily by investments in brand communication and product innovation," says Pushkar Jain, Marketing Manager, Dulux Paints, Akzo Nobel India.

"There is definitely an upgrade happening from economy to premium paints," says Nikhil Vora, Managing Director, IDFC Securities. Homes and offices are also being repainted more frequently. The repainting cycle is down from once every five to six years to once every two to three years, says the Ambit Capital report.

"Like TVs and mobiles, the life cycle of paints has also shortened. If the reduction is 50 per cent in durables, it is 30 per cent in paints," Vora adds.
TweetYoutube
Tags: paints | premium paints | decorative paints | Nerolac | Asian Paints | Berger