On July 26, 2009, President Pratibha Patil pressed a button that launched INS Arihant, India's first indigenously built nuclear submarine, into the Bay of Bengal. As he watched the submarine disappear under the waters off Visakhapatnam, home base of India's Eastern Naval Command, M.V. Kotwal was a satisfied man. The President of Heavy Engineering at Larsen & Toubro (L&T) had good reason: the hull of the vessel had been built at his company's shipyard in Hazira. If the government sticks to its plans, L&T and other private companies could soon be producing far more than submarine hulls for India's armed forces. Currently, defence is worth less than Rs 2,500 crore to the private sector. But that is set to change with the Centre keen on making domestic companies meet 70 per cent of the country's defence needs within the next five years. For Indian companies, that is an opportunity of at least $50 billion (12.5 lakh crore).

Two large defence contracts, worth a combined Rs 75,000 crore, best epitomise this new approach. Set to be awarded by the Defence Ministry in the next few months, these contracts will be unique, as they will be 'Make in India' deals. Meaning, the Future Infantry Combat Vehicle (FICV) and the Tactical Communication System will be designed, developed and built in India. The private sector will jostle for these contracts along with the usual suspects: defence public sector units (DPSU). Companies such as Tata Motors, Tata Power, Mahindra and Mahindra, Ashok Leyland, L&T, Wipro and Infosys are all part of consortia bidding for these contracts.

Kutub Hai, a retired Brigadier who spearheaded Mahindra's entry into defence a decade ago, believes the FICV and the Tactical Communication System contracts can change the face of India's defence manufacturing industry. "Until now, we have adapted Western systems to meet our requirements. The FICV will be unique because we will be building a system for our unique needs." The contract is worth Rs 60,000 crore.

Click here to Enlarge
With the country expected to spend an estimated $100 billion over the next 10 years on arms, the opportunity before the private sector is unprecedented. A recent report by the Confederation of Indian Industry (CII) and the Boston Consulting Group (BCG), underlines the fact that India is set to become a global leader in defence manufacturing. The report notes that if the country is to achieve its target of getting the manufacturing sector to account for 25 per cent of Gross Domestic Product (GDP), the defence sector has to take the lead.

"If India is to achieve 70 to 80 per cent domestic supply, production will need to increase almost 30 per cent annually. Even if you double productivity of each employee, there can be 120,000 new jobs created in defence manufacturing, and up to a million new jobs overall," says Ajai Chowdhry, Chairman of HCL Infosystems and President of CII's National Defence Council. 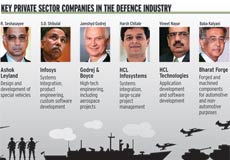 Click here to Enlarge
But, there are challenges ahead, not least because of India's poor track record in delivering large-scale indigenous projects. For instance, the Arjun Main Battle Tank and the Tejas Light Combat Aircraft have consumed huge resources and taken decades to develop, with little to show. The Defence Research and Development Organisation's (DRDO) Arjun tank was seen to be too heavy, sinking in the sands of the Thar Desert. The Aeronautical Development Authority (ADA) was given the brief for Tejas back in 1984 but the fighter is still two years away from full induction in the Air Force.

Defence Minister A.K. Antony believes letting in private companies could be the way forward. "We have to ensure that India produces more than 70 per cent of her defence needs domestically. For this we need the participation and co-operation of the private sector," he said at the recently held DefExpo in New Delhi. The exhibition highlighted land and sea military systems, and was one of the biggest such shows in the world. Indigenisation will lower India's massive defence import bill, which amounted to $5.5 billion (approximately Rs 24,475 crore) in 2010. The country is currently the world's largest importer of arms, buying over two-third of its defence hardware abroad.

Considering the size of the import bill, the delay in giving private companies a greater role is surprising. "The defence sector is worth just Rs 500 to 600 crore for us annually," says Kotwal, "and it is not a regular business." L&T had revenues of Rs 52,000 crore in 2010/11, and defence is a tiny drop in that ocean.

Click here to Enlarge
Some believe that part of the problem stems from India's 'offset' policy. Offsets first made an appearance in the 2006 Defence Procurement Policy (DPP), which stipulated that 30 per cent of the economic value of all defence contracts worth more than Rs 300 crore had to be given - offset - to Indian companies. The policy has been refined - and some say diluted - over the past few years.

The latest DPP, formulated in 2011, has more areas in which offsets can be credited, including civil aviation and internal security. "The offset policy is complete bunkum," says Nitin Pai, Fellow and Founder of the Takshashila Institution, a defence and economic think-tank. "The problem with offsets is that they are based almost completely on economic value rather than technology. It is therefore in bureaucrats' interest to meet offset value targets."

L&T'S Kotwal has an amusing and disturbing anecdote about an offset deal. "We were asked if we could be a partner in the offsets of a foreign supplier. We were excited because we thought we could pick up valuable engineering insights. But these guys wanted us to put up a building as part of the offsets [L&T is also one of India's leading construction companies]. I was flabbergasted." Click here to Enlarge
The solution, Pai argues, is for the government to remove the 26 per cent foreign direct investment (FDI) cap for defence suppliers and allow full FDI. To buttress his point, he cites the example of the Indian automotive industry. "When India opened up its economy in the early 1990s, a host of carmakers came to India. Some tied up with Indian firms while others came with full ownership of their subsidiaries. In the process, we built the knowledge and skills to develop and build passenger vehicles of our own. The same has to happen in defence."

But the offset policy also has its defenders, some of them foreign suppliers. One of the companies that needs to fulfil offset requirements is American aerospace major, Boeing.

The company has already sold eight P-8I naval reconnaissance aircraft to India for $2.1 billion and 12 Boeing C-17 heavy-lift aircraft for $4.1 billion. Dennis Swanson, head of Boeing's defence operations in India, is a veteran of offset deals. "We work closely with Indian industry, both in the public and private sectors, to meet our offset requirements," he says. "It is only natural that a country would want to offset parts of these multi-billion deals, and building up skills in India will benefit this country in the long-term."

However, Boeing has faced difficulties with offsets in the past on the commercial aviation front. When the company sold 68 aircraft to Air India in 2005, part of the offset clause involved development of a Maintenance, Repair and Overhaul (MRO) facility. Nagpur, the largest city in then Civil Aviation Minister Praful Patel's native Vidarbha region, was chosen as the location for the centre.

The MRO facility is yet to see the light of day, though Boeing's India chief, Dinesh Keskar, says the project will be operational by the middle of next year. Defence contractors have a seven-year window to complete offset requirements. But finding partners who have the funds and abilities to meet their stringent requirements is easier said than done.

Recently, India announced it would be buying 126 Rafale fighter jets from France's Dassault aviation for an estimated Rs 52,000 crore. Under the terms of the Medium Multi-Role Combat Aircraft (MMRCA) tender, 50 per cent of the total deal value will be economically offset to India. Anil Lal, Chairman and Managing Director of state-owned Bharat Electronics, expects $300 million worth of offset business from the deal.


There are some examples of successful joint ventures between Indian and foreign companies in the defence space. These include the tie-up between Tata and American helicopter firm Sikorsky, part of the United Technologies conglomerate, to build bodies for S-92 helicopters. The first S-92 helicopter body from the Tata-Sikorsky deal was recently completed and flown to India. The joint venture is now looking to bid for a potential contract for heavy-lift helicopters from the Indian Army.

The tie-up between Mahindra and BAE Systems is another example. The joint venture is building Mine-Protected Vehicles (MPV) for police and paramilitary forces and recently sold several of these vehicles to the police forces in Chhattisgarh, which is combating an ultra-left wing insurgency.

Apart from submarine hulls, L&T is also involved in other key defence projects. It manufactures fast pursuit boats for the Indian Navy and Coast Guard, and is developing and manufacturing missile launchers for the Indian Army. The Mahindra group announced two more joint venture proposals during DefExpo, one with US-based electronics and communications firm, Telefonics, and another with Israeli defence contractor, Rafael. Both joint ventures will help the company address different parts of the defence opportunity. Mahindra makes everything from naval systems to mine-protected vehicles for paramilitary and police forces. But there are several bumps on the road. The world of defence supplies is a murky one on a good day.

India is the darling of many large, global defence firms, who earn heavily from its purchases. They would be happy to see it retain its position as the world's largest defence importer. That needs to change. "If we lose this opportunity, we may always be at the mercy of others", says Chowdhry ominously.


Tata leaves behind a clean slate for Mistry