The tsunami that struck India's eastern coast on December 26, 2004, killing over 10,000 people, also destroyed - along with much else - a large clock at the Bharat Sanchar Nigam Ltd, or BSNL, telephone exchange in the Andaman and Nicobar Islands.

The hands of the clock stopped at 6.43 in the morning and have not moved since. Though the company's decline may have begun even earlier, BSNL insiders often link the start of its downfall to that fateful moment.

After the tsunami, the local sub divisional officer and his team worked round the clock to restore communications, finally succeeding after 72 hours. They knew it was crucial: BSNL lines were then the only means by which people on the islands could establish contact with the world. If a BSNL exchange was to collapse in any part of the country now, it would hardly matter. There are numerous other, more efficient telecom providers. 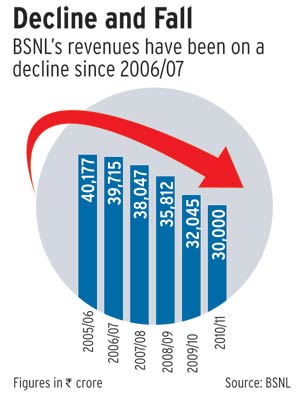 Despite the formidable legacy it inherited - hived off in 2000 from the Department of Telecommunications which had monopolistic control of telephone services across the country for decades till privatisation set in - BSNL is in serious trouble today.

Its losses in 2010/11 have yet to be computed, but are estimated by various sources at around Rs 5,000 crore. In revenues it is now well behind Bharti Airtel, Rs 30,000 crore against Bharti's Rs 39,615 crore in 2009/10. In the same year it ranked fourth in mobile phone subscribers - behind Bharti Airtel, Reliance Communications and Vodafone. 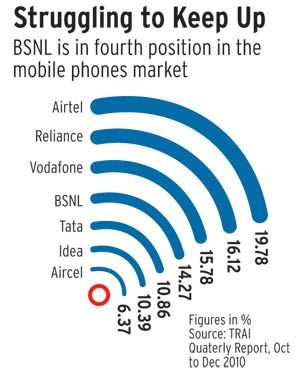 But far from being able to take advantage of the boom, BSNL has been losing both subscribers and money. Yet Rakesh Kumar Upadhyay, who took over as Chairman and Managing Director at the end of April, is convinced his ailing company still has the capacity to bounce back. What does he plan to do?

Revival strategy
Given the state of BSNL, attracting large numbers of new subscribers in the immediate future is ruled out. Upadhyay knows he must find other means of generating revenues. One such, he believes, is to use the 60,000-odd telecom towers BSNL owns more effectively.

Since each tower can be used by at least three telecom providers, a number of other companies have entered into agreements to lease out the ones they own or share them. For instance, Bharti Airtel, Vodafone and Idea Cellular have launched a joint venture company, Indus Towers, and are sharing towers.

Well after others had done so, in late 2009, BSNL signed a 10-year tower sharing arrangement with Aircel, but given its formidable tower strength, it has the potential to work out more deals. "I have reactivated the mechanism of renting out towers wherever possible," says Upadhyay.

Yet another lucrative income source, says Upadhyay, could be the considerable amount of office space BSNL owns. It has spacious offices in every part of the country, including semi-urban areas - a legacy of the pre-liberalisation days - large parts of which are unused. Why not rent the empty rooms out? "It should be a great opportunity for companies, especially IT and ITeS companies," says Upadhyay. The ailing giant has also sought to improve its billing - which consumers often complained about - by introducing an improved system called Call Data Record, or CDR, to replace the existing meter-based billing. This will generate a single bill even if multiple BSNL services are being used by a consumer.

The technology may have been introduced before Upadhyay took over, but he intends to pursue its installation vigorously. CDR will improve customer experience by drastically bringing down instances of excess billing, while also enabling BSNL to reduce operational costs.

A 1975 batch Indian Telecom Services Officer, who has been taking a close look at all aspects of BSNL's functioning, Upadhyay says he has told his chief general managers in every circle that revenues have to increase. "Functions at every level will have to improve," he says.

Former BSNL Chairman Prithipal Singh, under whom Upadhyay worked as a Chief General Manager, believes the man means business. "He is an aggressive leader," says Singh. "He is hard working and has the strength to take risks."

What went wrong
BSNL's woes can be traced to the fact that it never fulfilled the purpose for which it was created. It was separated from DoT so that it could be run as an autonomous entity on corporate principles. But it never was, say insiders. Most decisions, big and small, stemmed from political considerations. Even the media channels in which it should advertise were decided by political masters. "BSNL is like a child everyone wants to exploit," says S.D. Saxena, former Director, Finance, with the company. "Politicians think they own it."

This may well be the reason why BSNL, despite having been on the list of public sector units slated for disinvestment - and subsequent listing - for years, remains fully government-owned. Disinvestment will force greater transparency, making politically motivated decisions that much more difficult. So too the longtime proposal to merge BSNL with Mahanagar Telephone Nigam Ltd, or MTNL, has never been seriously pursued.

With MTNL having been disinvested and listed in 2002, any such merger would have made the combined entity a listed company too. And now, with MTNL too making losses, such a merger would make little sense, points out Saxena. Thus when the mobile phone revolution hit its peak in 2004/05, BSNL was least prepared to meet it.

While its rivals expanded their networks rapidly and marketed their products aggressively, BSNL - bogged down by external control and a big bureaucracy - failed to take or implement quick decisions. Besides, with its legacy of having been sole operator, marketing was never its strong point. Finally in 2007, having woken up to the need to expand, it called for tenders to buy $10 billion worth of GSM, or global system for mobile communication, equipment.

The equipment has yet to be procured. Equipment provider Nokia Seimens Network went to court protesting BSNL's tendering process, sparking off a prolonged legal wrangle.

S.D. Saxena, former Director, Finance, BSNL
In 3G services, BSNL got the first mover advantage when it was allotted additional spectrum in early 2009, while private players were allowed to enter the fray only in May 2010. But its 3G services have had few takers, thanks to poor branding and marketing. "BSNL just doesn't have the marketing aggression of the private sector," says Mahesh Uppal, Director, Com First, a telecom policy consultancy firm.

The legacy of DoT also brought BSNL a workforce of 280,000; in 2009/10, it spent 41 per cent of its revenues in paying salaries. In contrast, a key factor behind rival Bharti Airtel's success is its strategy of outsourcing most non-core activity.

It has just 20,000 employees on its rolls, though an equal number work exclusively for it to fulfill the outsourcing contracts it has with the likes of IBM, Firstsource, Ericsson and Oracle. BSNL must do everything in house; even so, many of its employees have little to do.

"We are working on some plans for staff reduction, including a voluntary retirement offer," says Upadhyay.

With his company plagued by poor governance, poor customerconnect and almost zero marketing, Upadhyay, for all his optimism, has many sleepless nights ahead.
TweetYoutube

Goodbye US: Indians head back home to set up start-ups