Suguna Poultry sold Rs 2,000 crore worth of live chicken, eggs and processed meat last year, by sourcing birds from 15,000 small and medium poultry farmers. Now, it is planning a pan-Indian roll-out and even a foray abroad. Can its model keep delivering results? BT's N. Madhavan finds out.

Wipro Chairman Azim Premji doesn’t often take time off his busy schedule to visit companies not connected with his business. But having heard of Suguna Poultry Farm’s radical business model, which has spawned about 15,000 rural entrepreneurs across 10 states, he made an exception. In June 2007, he went down to Coimbatore and spent an hour understanding the company and its IT infrastructure first hand. And he went away impressed. 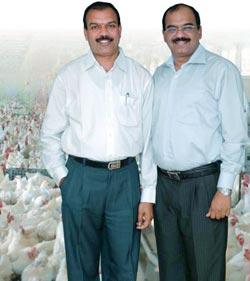 G.B.Sundararajan(left) and B. Soundararajan(right)
Suguna’s promoters may not have been to college, but brothers B. Soundararajan (Class 11) and G.B. Sundararajan (Class 12) can write a book on how to convert a crisis into an opportunity, on the benefits of forward and backward integration and on the importance of risk management. What’s more, they can write all this from personal experience, having converted a nondescript chicken and egg shop in Udumalpet, 75 km from Coimbatore in Tamil Nadu, into a major player in India’s Rs 40,000-crore poultry industry. Suguna, which claims to be the largest player in the Indian broiler market and fourth-largest in the world in that segment, has operations across 10 states, where it sources chicken and eggs from 15,000 poultry farmers.

“It was initially tough for us, but we put our faith in the farmers and nurtured them; and there was no looking back,” says Soundararajan, Managing Director of the company.

Suguna does not own most of these farms. They are owned by farmers who it has contracted to rear the birds for a fee. And it is this business model that has enabled it to grow at over 30 per cent year-on-year (see A Lot More Than Chicken Feed). Suguna supplies the farmers with day-old chicks, the required feed and medicines. Its field staff makes daily visits to each farm to check the health of the birds, their feed intake, growth and mortality levels. After six weeks, the birds are weighed and sold by Suguna. The farmers are paid a fee for managing the birds.

“This is a win-win model for the farmer, the company and the country,” says Soundararajan. Agrees M. Palanisamy, a former textile company worker, one of the contract farmers engaged by Suguna since 1994: “There is no risk for us as we do not own the chicks. We also don’t have to worry about the prices of feed stock, the logistics of arranging for veterinary guidance and the selling price of chicken. Suguna takes care of all that. We just need to ensure that the birds are well looked after as they grow.”

For Suguna, the model offers faster scalability as it does not have to buy or lease the farms. This has enabled it to keep its total investment till date to about Rs 1,000 crore. Then, the model improves efficiency by cutting the number of cost centres from 14 in traditional farms to just four, and allows Suguna to leverage economies of scale in the procurement of raw materials, feed and medicines. Adds Soundararajan: “It’s also very good from the country’s point of view—we have created 15,000 rural entrepreneurs over the last 17 years.”

But the success the brothers now enjoy was won only with great effort. Initially, they found it difficult to convince people that their model was viable. Till 1998, no bank was willing to finance Suguna. The story is very different now; 10 banks lend money to the company and several others are pitching to add it to their list of borrowers.

The Suguna model emerged by accident. In 1986, the two brothers set up a poultry farm, with 200 layer (egg-laying) birds at Udumalpet. They also set up a small shop to sell eggs and to trade in poultry feed and medicines. This business ran into trouble in 1989-90, when prices crashed because of an over-supply of birds in the local market. Poultry farmers, who had bought feed and medicines on credit, could not settle their dues. To recover their money, the brothers began to provide feed and medicines to indebted farmers in return for the end product— eggs. The success of this exercise gave birth to the Suguna model.

Most poultry farmers, who had burnt their hands during the crisis but still had the infrastructure for poultry farming, readily agreed to Suguna’s contract model. That’s when the brothers faced their second major crisis. In 1992, fearing the rapid rise of Suguna, their regular supplier of day-old chicks stopped deliveries. “It was a major problem for us. Without chicks, our growth would end. So, we decided to set up a hatchery to supply day-old chicks to our network of contract farmers,” says Sundararajan, the younger brother and Joint Managing Director of the company. “This taught us an important lesson—we had to integrate backward if we had to grow and make it big in the business.”

In 1993, the company set up a “parent farm”, where the parent breed was reared (day-old chicks hatched by these birds are sent to the contract farmers). In 2000, it began to directly import “grandparent chicks”—chicken that have the best genetic make-up for breeding broilers— from the UK and set up a “grandparent farm”. Suguna’s backward integration didn’t stop there. It has set up a network to directly procure maize and soya, key poultry feeds, from farmers to keep costs low. The company also forayed into the layer segment of the poultry business in 2007, grabbing a 6.6 per cent market share in the first year.

Venkateshwara Hatcheries (90 per cent market share) is the dominant player in this segment. Suguna has also launched branded eggs, targeted at health-conscious people. The company’s flat management structure allows it to grow fast. Its operations are divided into 13 regions, each under the charge of a manager who has total freedom to decide on issues in his region. It has also been beefing up its management bandwidth by poaching staff from established players such as Venkateshwara Hatcheries and others.

The promoters have recently set up the Suguna Fresh chain of stores in Coimbatore to sell fresh chicken and ready-to-cook products, and will launch ready-to-eat products too, soon. “The goal is to mobilise at least 5 per cent of our revenues from value-added products from this year, compared to about 2 per cent now,” says Soundararajan.

The company also plans to sell its ready-to-cook and ready-to-eat products and branded eggs through other retail chains as well. “We want to be a Rs 13,000-crore company by 2013.

By then, we should have a network of 60,000 contract farmers across India,” says Sundararajan. This expansion may not cost much as Suguna’s model obviates the need for heavy investments.

But it is setting up Asia’s largest feed mill near Bangalore and at least four more feed mills will become operational this year. It is also setting up a vaccine manufacturing plant near Hyderabad. The investment: Rs 400 crore, funded entirely by debt.

Can Suguna and its two promoters pull off their ambitious plans? “In 2007, the per capita consumption of chicken in India was a paltry 2.04 kg, compared to the global average of 11.40 kg. Then, Indians, on an average, consumed just 42 eggs per annum compared to 128 eggs globally. There is a huge headroom for growth.

And that is the opportunity Suguna hopes to tap and ride.