In under three years, a whole new industry has been born, that of radio taxis. And in 2010, you'll be seeing a lot more of them on the road. 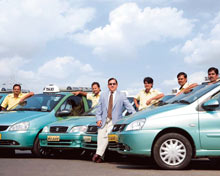 Laureen Cheran Momin, a Public Relations Executive working in Delhi, does not own a car. So, most weekends when she is out and has to get home, she calls up her favourite radio taxi service Meru Cabs. "The cabs are clean, the drivers are polite and you know that the cabs are being monitored, so I feel safe," she says. Momin isn't alone. Meru Cabs, India's largest radio taxi service with a fleet of 4,000 cars, carries over a million passengers every month across the four cities it operates in.

And to think that at the start of 2007, this industry did not exist. Today, there are two large national operators—Meru Cabs and Easy Cabs—as well as several smaller players such as Mega Cabs (Delhi, Mumbai and Chandigarh) and Orix Infrastructure (Delhi and Kolkata), which operate in fewer cities. What sets Meru Cabs and Easy Cabs apart in terms of brand recognition are their scale of operations and an official presence at airports.

"Customers can come in to our taxis, which have a well-groomed driver, who knows the city, a comfortable air-conditioned and safe ride and they do not need to negotiate with the driver. That is our biggest selling point," says Rajesh Puri, CEO, Meru Cabs. "Taxis like ours also help a city's brand image. Ratty old taxis such as those in Delhi and Mumbai give travellers a bad impression of the country. What we are providing is not a luxury service, but a critical infrastructure service," explains Vikas Marwah, COO, Carzonrent, operators of Easy Cabs.

While the service itself may not be very high-tech, the back-end systems of both operators are quite advanced. Once you make a call to the call centre, a taxi is allotted to you via an algorithm, which calculates not only the taxi closest to you, but also the amount of business that a particular taxi has done, and then sends a request to a few drivers to "bid" for the fare. This is done through the Global Positioning System (GPS) enabled computer module on the drivers' dashboard, which is connected to the radio taxi operators' system via a mobile data connection. Drivers "bid" via a touch screen monitor and the winning driver has his number sent to the customer's mobile.

While some drivers complain that the system often results in favourtism, Puri begs to differ. "There is still some manual intervention, after all, if we have promised a customer a cab, we have to deliver. When we started, 40 per cent of the time we had to manually allocate cabs. Today, 95 per cent of the time the system does the allocation," he says. The increase, he claims, is mainly due to drivers learning the process as well a more robust back-end technology.

The reason some drivers show dissatisfaction with the system is because they themselves are not employees of the companies. Instead, they are referred to as "subscribers", who have to pay a certain amount everyday (Rs 800 daily for Easy Cabs; Rs 900 daily for Meru Cabs) for the use of the car. The operators then guarantee them a certain number of fares everyday. "In Delhi, for example, we try and assure our drivers a minimum of six fares daily, four from the call centre and two at the airport," says Marwah.

Both Marwah and Puri claim that the drivers are happier as subscribers of their companies than they had been as private drivers or as owners of older black-and-yellow taxis. "The average fare is around Rs 300, six fares a day, minus the cost of fuel and maintenance, drivers can easily make Rs 600-800 daily. They make around Rs 15,000-20,000 every month," claims Marwah. "They earn 2-3 times more than what they did in their previous jobs. We make entrepreneurs out of them," adds Puri.

Chand Chaudhary is one such driver. He used to work for an executive in New Delhi's tony Vasant Vihar neighbourhood. He has taken a month's leave to work as a subscriber with Meru Cabs. While he has his reservations on the service, he is impressed with the connectivity. Most cars have on-board cameras, and once he was made to drop off a customer who was smoking in the car. "Most importantly, the connectivity ensures that women customers feel comfortable, which is a good thing," he says. Neeraj, another driver, has been with Easy Cabs for over a year now and has willingly given up his previous job of driving trucks. The money is as good, if not better, he says, and he gets to spend time at home. "My children were growing up without me, as I always used to be away in some other part of the country. Now I can spend time at home," he says.

But the business is still struggling to meet the demand. Despite the scale— Easy Cabs has over 800 taxis in Delhi and Meru over 900—both operators admit they have to turn away a good number of customers due to demand far outstripping supply.

"We reject a third of our calls everyday, and that really is a problem. We don't want customers to stop using us because of this," says Puri. In fact, Meru is talking of doubling its nationwide fleet size to 8,000 taxis by the end of 2010 and plans to start services in Chennai and Kolkata. In Delhi alone, the company plans to have 2,000-plus taxis by 2011. Easy Cabs is launching in Mumbai in February with an initial fleet of 500 cars, and Pune and Chennai will also come online by the end of the year.

But there are other issues that bedevil the operators. The first was being caught in the middle of a political war between the Delhi and Uttar Pradesh state administrations over taxes. This meant that operators stopped offering services to Delhi's satellite cities of Noida and Ghaziabad. While services have resumed, operators say it left passengers confused and angry, "particularly at airports", says Puri.

Other issues—big and small—too, continue to create problems. Both operators have lost a few cars to theft, "but a minuscule amount and the cars are insured", says Marwah. The other critical issue, mainly in Mumbai, is that of permits. "City administrations have to realise that we add to the city's infrastructure and image," says Puri. The operators maintain that automotive manufacturers should make exclusively "taxi-style" vehicles for them. Not an unreasonable demand, with these two operators alone set to buy 6,000 cars this year.

In fact, 2010 might not just see Meru Cabs and Easy Cabs expand services. Other operators might also dramatically ramp up their services, and some operators will start services in new cities. So, despite the hiccups. it has been a smooth ride till now. Just as with low-cost air travel, this was a segment waiting to be tapped.

Me and my personal CFO

No poverty of ideas