Real estate is in the doldrums again, thanks to rising interest rates, tighter lending norms and a volatile market.

Just when it seemed the real estate sector was set to boom again, it has been dealt a series of severe body blows. When the global financial crisis of 2008/09, which had hit construction badly, ended, and liquidity returned to the market, builders prepared to celebrate. There were even a few initial public offerings, or IPOs, from players such as Oberoi Realty and Prestige Estates Projects.

Then last November came the bribe-for-loan scam. The CBI arrested eight senior executives of top financial institutions such as LIC Housing Finance, Bank of India, Central Bank of India and Punjab National Bank on charges of accepting bribes for sanctioning big-ticket loans. In a kneejerk reaction, the Reserve Bank of India tightened the provisioning norms for real estate sector lending, and reduced the maximum amount banks can lend to home buyers to 80 per cent from 85 per cent previously.

Alongside, overheated markets, a sliding Sensex and rising interest rates over the past year have made matters worse. The IPO window is now firmly shut, listed real estate stocks are taking a beating and tighter lending norms by banks have made capital scarce. Money is not cheap even if it is available. 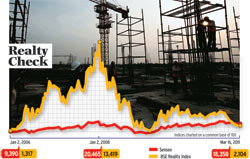 Click here to Enlarge
Has the sector lost the buzz? "Nothing has been positive for the industry since November," says Mumbai-based real estate consultant Nilesh Parekh. Even though the scam was confined to a few institutions and individuals, it was a severe blow for the entire sector, which has now come under increased scrutiny from the government and RBI. Mobilising resources has become a challenge for developers as banks think twice before lending to them.

Interest rates have been inching up as a result of the RBI efforts to tame inflation through tighter monetary policy actions. Over the past 12 months, the apex bank has hiked key rates eight times, with the latest one on March 17 seeing a hike of 25 basis points in repo and reverse repo rates. "From 15 to 17 per cent, interest rates for developers have shot up to 20 to 22 per cent in less than three quarters," says Harresh Mehta, Managing Director of Rohan Lifescapes, a Mumbai-based real estate player.

"Higher interest rates are a double whammy for real estate companies," explains Prakash Agarwal, an analyst with RBS Securities, India. There is an incremental impact on the top line because higher rates keep buyers away. The bottom line also takes a hit as higher interest payments affect operating and net incomes. "In case of leveraged players, 50 to 80 per cent of the operating income goes towards loan servicing," says Agarwal.

For the quarter ended December 2010, interest expenses of companies on the BSE Realty Index rose to Rs 564 crore from Rs 402.37 crore in December 2009 - a whopping 40.26 per cent jump. Total income for the period declined 6.3 per cent, from Rs 3747 crore in December 2009 to Rs 3,511 crore in December 2010.
Costly loans, shrinking sales
Debt is a big worry, too, for builders. The Rs 25,000-crore debt - which the RBI allowed to be restructured following the slowdown - is due for repayment. Mayur Shah, Managing Director of Mumbai-based developer Marathon Group, points out that though funding is available to those with good track records, the cost of funds has gone up across the industry. And that means a vicious cycle of lower lending at higher rates.

Shrinking sales volumes are also adding to the woes. Many ongoing projects are stuck midway, with buyers shying away because of exorbitant prices. This has hit the cash flows of companies. Some experts believe developers will have to reduce prices if they want to raise liquidity. "The residential market is not expected to revive unless prices correct," says Pranab Datta, Vice Chairman and Managing Director, Knight Frank (India), an independent global residential and commercial property consultancy.

Most observers feel that heated markets like Mumbai and Delhi could see a correction of around 20 per cent over the next six months. Prices inching above the peak levels of 2007 in Mumbai and Delhi NCR has been a matter of concern. With sales volumes shrinking, developers will have to clear inventories and reduce prices as well. There is turmoil in some residential markets like Chennai and Gurgaon, notes Datta. "Volumes have come down due to higher prices," he says.

Not everyone agrees that the situation is desperate or that there is no option but to cut prices if sales are to improve. "Developers are looking at other avenues," says Prakash Kalothia, CEO and MD, Sun-Apollo Real Estate Advisors, managers of a $630-million (Rs 2,898-crore) real estate private equity, or PE, fund. In January, Kalothia's fund picked up a 49.9 per cent stake for Rs 100 crore in a Parsvnath Developers project. Earlier, in December 2009, it picked up 50 per cent in another Parsvnath project for Rs 75 crore. Red Fort Capital acquired 26 per cent in a venture of Ansal Projects and Infrastructure for Rs 200 crore in February 2011. "The market is more attractive now compared to six months ago even though the outlook has turned bearish," says V. Hari Krishna, Director, Kotak Realty Fund, one of India's first PE funds with $850 million in assets under its management.

Will PE investors be the new messiahs for cashstarved real estate companies? "There is value on the table in most markets and many investors are in the process of closing deals," adds Krishna. But the picture is not as rosy as Krishna paints.

Generally, it takes up to six months for a PE investor to get onboard a real estate investment, but this time the going is slower. "There is no incentive to push the deal faster," says Sunil Mantri, Chairman of Mumbai-based developer Sunil Mantri Group. Mantri is negotiating with a foreign PE investor for a Rs 250-crore infusion. Talks have been on for over four months, and it may take another three months for the deal to come through.

In fact, PE investors are making the best of the current opportunity. Unlike a straightforward equity investment, where investors bear the development and price risk of the project, PE players are pushing across hybrid structures, says a consultant on condition of anonymity. "PE investors are looking for higher safety and higher returns by frontloading a debt-like investment which follows equity participation at a later stage," he explains.

After the global financial crisis, qualified institutional buyers, or QIBs, pumped in over Rs 10,000 crore into listed firms. "But the scenario was different then," says an analyst with a brokerage, With steep correction across broader markets, there was value for investors, he adds. But at present, almost all realty stocks that went public since 2006 are trading below the issue price.

"Investors have lost money and volatility in these stocks is high," says Sun-Apollo's Kalothia. No IPOs for Now Over a dozen realty player s like Lodha Developers and Raheja Universal have filed prospectuses and received a regulatory nod to tap the market. "But the mood is sombre given the ongoing weak market sentiments," says an investment banker, who liaises on real estate investments, Further, excessive liabilities on the balance sheets remain a problem.

Almost all the companies lining up to tap the primary market would want to use part of the IPO proceeds to repay loans. "We are living in interesting times," says Ved Prakash Arya, CEO of Milestone Capital Advisors, a real estate-focused PE fund management company.

Repayment of restructured loans in the next three months is another area of concern. "This will tighten liquidity," says Mantri. Developers may go slow on new projects to control cash flows or try to generate own funds from retail sales. "This is a wait-and-watch phase," says Mehta of Rohan Lifescapes. According to Marathon's Shah, "These are cyclical challenges." He says the prevailing rates are average of what prevailed in the past 10 years. "The only exception was 2007/08 when we saw single-digit rates."

Back to Nilesh Parekh. "Everything is on shaky ground for now." It will be sometime before the sector returns to normal again.

'We love the news business'

Is Infosys ready for post-Murthy era?