There is something about Palaniappan Chidambaram's economics that the stock market loves, often disregarding the politics around him. One of the deepest shades of purple the markets ever acquired was in 1997, in the first flush of the "dream budget" Chidambaram presented that year as the finance minister of a shaky United Front government. In 2004, the market shed the Left Front blues once Chidambaram was ensconced in the Finance Ministry as the first United Progressive Alliance (UPA) government gingerly began its tenure. Eight years on, the story is not much different.

On October 5, the Sensex ended at 18,938.46, just short of its highest level in 15 months and up 9.7 per cent from August 1, despite the UPA government hanging on to power by the thinnest of threads. In the same period, the rupee, much battered this year, has gained about seven per cent to close at 51.85 against the US dollar. And what happened on August 1? Chidambaram came back to North Block, the seat of the Finance Ministry.

"He's a man in a hurry," said HSBC Bank Country Head Naina Lal Kidwai of Chidambaram, after a brainstorming session on October 3 that corporate executives had with him on the state of the economy.

Kidwai's view is echoed even by industry executives who have not yet discussed the economy with Chidambaram. "Industry's mood seems to be positive now," says Raju Kaul, Group Chief Financial Officer of engineering and construction company Punj Lloyd.

Reform measures per se hold little value until and unless they are implemented on the ground with the same level of enthusiasm.

You will see several comments that certify that the mood has indeed perked up as the man in a hurry, backed firmly by the unhurried visage of Prime Minister Manmohan Singh, has announced a slew of measures to revive the economy. The inflation-sensitive diesel prices have been raised -- their first rise in nearly 15 months -- and the country has opened its doors wider to foreign investment in several sectors. These moves aim at curbing the subsidy bill, narrowing the fiscal deficit, and attracting capital. Positive, but still too little: C.P. Gurnani
The overdrive did not run out of steam there. On October 4, just a day before this magazine was put to bed, the government tossed the ball onto Parliament's floor several key legislative measures that promise the real reform many had been clamouring for after the diesel and FDI changes.

There is a bill to raise the FDI cap in insurance to 49 per cent and another to allow FDI, with the same limit as insurance, for the first time in pension funds. The Cabinet also cleared the Companies Bill that would transform the running of joint-stock companies.

"It (the Companies Bill) is designed for the 21st century," Chidambaram said on the evening of October 4. These bills are likely to be placed in Parliament for a vote in the forthcoming winter session. The intent is very, very clear. I have not seen so much action since 1991. Things will work now, and even if they don't, at least they tried: Kishore Biyani
But have the 10 weeks since Chidambaram's return to the North Block undone the damage done to the economy over the previous three years, when "policy paralysis" became a hackneyed phrase?

An economy that was growing at 8.4 per cent when the UPA started a second consecutive term in May 2009 slowed down to 6.5 per cent in 2011-12, its slowest pace in nine years. And the Asian Development Bank on October 3 lowered its growth forecast for India to 5.6 per cent for 2012/13 from 7 per cent.

So a bit of scepticism will not be out of place. The government itself has made the first attempt to temper expectations. I look at the reforms as a confidence booster for the (insurance) sector: Sandeep Bakshi
Raghuram G. Rajan, the former International Monetary Fund chief economist who took over as Chidambaram's Chief Economic Advisor in August, sees a long grind ahead. In engagements with the media in the last week of September, he said there were no quick fixes and it might be a few years before the Indian economy settled in a growth path of 8.5 to 9 per cent.

The existing insurance companies will use the capital to grow their business and provide much required solvency capital. Increased FDI is likely to bring close to Rs 8,000 crore of capital into the country.

The enthusiasm over the recent measures can be explained by the dry spell earlier. "For the last six to seven quarters, there have hardly been any policy changes," says Punj Lloyd's Kaul while explaining the change in sentiment.

But how much can sentiment alone do? These measures are extremely positive. For sometime now, the insurance sector has been seeking additional investments and an increase in the FDI cap: Malvinder Mohan Singh
Deepak Parekh, Chairman, Housing Development Finance Corporation, knows a thing or two about the challenges Kidwai mentions. As the government's point man on infrastructure financing with the rank of minister of state, Parekh has some suggestions for the government.

In an interim report to Prime Minister Manmohan Singh on October 3, Parekh says the infrastructure sector needs Rs 51.5 trillion (one trillion is one lakh crore) over the next five years, more than double the Rs 19.5 trillion invested over the preceding five. Of this, the private sector needs to bring in Rs 24 trillion.

But banks, the traditional source of funds, are not going to be of much help as they cope with the fallout of bad calls made earlier. Finance Ministry data show that outstanding loans on banks' corporate debt restructuring files amounted to Rs 65,335 crore as of March 31, 2012, up nearly three-fold in a year. For succour, Parekh's committee has suggested that consumers of energy pay for the increase in prices of inputs such as coal as a way of bringing in more private investment into these sectors.

It is not as if the government does not understand the importance of such measures. But it finds itself bound by politics.

A press conference addressed by Arvind Mayaram, Secretary to the Department of Economic Affairs, on September 28 provides a clue to the constraints. The press conference was to inform about a report submitted by a committee appointed by Chidambaram and headed by Vijay Kelkar, Chairman of the 13th Finance Commission, to draw a roadmap for fiscal consolidation.

"We cannot overemphasise the urgency of fiscal consolidation," said Mayaram. But he added that, though the government had not yet taken a final call on Kelkar's recommendations, it had decided to reject one suggestion on pruning subsidies as it ran counter to the UPA's aim of inclusive growth. 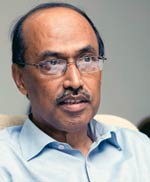 The measures are in the right direction but they still need parliamentary approval. The twin deficits, fiscal and current account, are major challenges facing India. Permitting FDI in various sectors would help reduce both: Samir K. Barua
The rejected suggestion was to end diesel subsidy in two years. The fuel, which powers commercial transport and whose prices are therefore linked to the prices of goods, carries a subsidy of Rs 11.65 a litre to the retail consumer.

The magnitude of Chidambaram's challenge to push through Parliament legislation on insurance and pension can be gauged from the torturous courses these bills have taken. He first introduced the pension bill nearly eight years ago, as the finance minister of the first UPA government. Pranab Mukherjee, who was in charge of the Finance Ministry during the period that Chidambaram headed the Home Ministry, tabled the pension bill again in March 2011.

The insurance bill was first introduced in the Rajya Sabha by Chidambaram not long after he brought in the one on pension. Add to this the fact that the UPA does not have the numbers to ensure a smooth sailing for the two bills.

The government has been making a concerted attempt to push through reforms in the last few weeks. I'm not surprised and it's a very welcome move: Arun Duggal
The opposition parties are of course going to block the bills, but it is not as if all the Congress allies in the UPA will be supportive either. The Dravida Munnetra Kazhagam, for instance, has been cool to the burst of reforms. No one was therefore surprised when Chidambaram made conciliatory noises when announcing the Cabinet's approval to the insurance and pension bills. "We will continue to engage all political parties in Parliament to get this bill passed," he said of the insurance bill. Even if one looks at the worst-case scenario of the insurance bill not going through (in Parliament), I still feel the seriousness with which the government is pushing reforms is a very welcome step: P. Nandagopal
Tricky negotiations lie ahead. "Legislation making in a Parliament where the government does not have absolute majority is a process of discussions and negotiations," he said, explaining that the UPA would also reach out to the main opposition Bharatiya Janata Party.

Reaching out is fine, but it does not guarantee that the BJP will be won over. The Election Commission has announced that counting for the forthcoming Assembly elections in Gujarat, a BJP fortress, will take place on December 20, around the time Finance Ministry officials say the winter session of Parliament will start.

As the Congress seeks to regain Gujarat, the heat of the elections might singe bills in Parliament. But it is not the first time that Chidambaram will seek to walk on political thin ice. And the stock market may not shy away from betting on him. Once again.
Tags: Reforms | P Chidambaram | Manmohan Singh | policy paralysis | growth rate | Indian economy | Foreign Direct Investment | multi-brand retail | insurance sector | pension sector