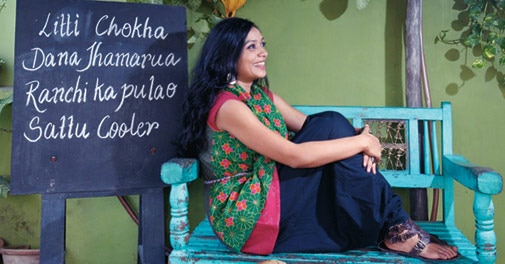 Sheer boredom led Puja Sahu and Vivita Relan to explore the idea of starting a cafe. They had been designing garments for over 11 years and were looking to do something new. They decided to use the terrace of the building in Shahpur Jat, Delhi, which housed their garment store. But what sort of dishes should they serve? "We knew no one would climb four floors to our restaurant if we didn't serve something exclusive," says Sahu. Hailing from Bihar, she plumped for Bihari cuisine. "We decided to serve something we knew well," she adds.

Few outside the state are probably even aware that Bihar has a distinctive cuisine. The dishes have hardly ever been marketed commercially. But Sahu and Relan were confident. Sahu's mother became unofficial food consultant and trained the chefs recruited for the restaurant. Potbelly Rooftop Cafe, as it was named, opened in August 2011, with an investment of a little over Rs 20 lakh, serving all the Bihari delicacies - litti chokha, Champaran mutton, dana jhamarua, keema aloo chop, khada masala chicken and more. In a year and a half, Sahu and Relan had broken even. "Sales are growing gradually but consistently. Today, we clock average monthly sales in the range of Rs 10 lakh," says Sahu.

Nor is Potbelly Rooftop Cafe a freak success. On the contrary, restaurants providing all kinds of regional as well as traditional cuisine have been gaining traction in recent years. No longer does an Indian restaurant mean either 'North Indian' (butter chicken, naan) or 'South Indian'(idli, dosa, vada) fare as it did a decade or two ago. Now there are eating places serving dishes from almost every state in the country - Kashmir to Kerala, Goa to Nagaland - as well as endless, traditional variations on a single theme, say biryani or kebab. "People want to experiment more than before with their food and are also spending more on eating out," says food columnist and curator, Anoothi Vishal. "For them, there is always the question of where to go next."

No doubt the market for such restaurants is still limited. The total restaurant market was pegged at around Rs 247,680 crore in 2013 by the National Restaurant Association of India (NRAI), of which the organised segment - licensed standalone outlets and chains - was around 30 per cent. Within this organised segment too, the traditional 'North Indian' and 'South Indian' restaurants, along with Chinese, still comprise 70 per cent - the remaining includes both international and regional or traditional fare. But there is growth. "State-specific restaurants are thriving both in terms of numbers and performance, some even attracting private equity (PE) investors," says Samir Kukreja, President, NRAI. Chuba Manen Longkumer at Naga Kitchen Photo: Aditya Kapoor
A classic success is Speciality Restaurants, promoted by Anjan Chatterjee, the man who proved Bengali cuisine could be marketed on a large scale. Speciality Restaurants has attracted PE investment and even had a successful listing on the stock market in 2012. Chatterjee started his first restaurant serving Bengali fare in Mumbai in 1992 called Only Fish, since then rechristened Oh! Calcutta, but now has 107-odd eateries, with a host of other brands as well - Mainland China, Sigree, Flame & Grill, Machaan, Just Biryani - which, as their names suggest, have moved way beyond Bengali cuisine. There have been PE investments in other such restaurants too. The Pind Balluchi chain, with dishes from Baluchistan, got funding from Everstone Capital; Goli Vada Pav, with its Maharashtrian fare, has attracted Venture East, Ammi's Biryani, serving an array of biryani, has had SAIF Partners investing in it.

Even lesser known examples of success abound. When techies Prakash Samantaray and Hara Mohapatra took up jobs in Bangalore, they badly missed the Odia cuisine they were used to. There were no Odia restaurants, so they decided to start one. They called it Dalma after a specialty dish from their state (dal with vegetables). "Initially people from Bengal and Assam - along with Odias - became regulars but now locals have also begun to patronise our restaurant. On weekdays, the ratio of Odia and non-Odia among our customers is 50:50," says Samantaray. Revenue has been growing 30 per cent year-on-year. The success has prompted the duo to start a shop selling Odia sweets as well. Dalma is all about Odia cuisine Photo: Nilotpal Baruah/www.indiatodayimages.com
Ever heard of Naga cuisine? If not, pay a visit to Naga Kitchen at Delhi's Green Park Extension. Chuba Manen Longkumer, with his sisters Washimenla and Tuluyinla, had been running a Naga food stall at the city's Dilli Haat - an open-air food court with cuisines from different parts of India - since 1995. Its success prompted them to invest in a fine dining restaurant. "Our experience at Dilli Haat convinced us that Naga food would be acceptable to people other than those from the northeast and foreigners," says Chuba Manen. The siblings take care to source 80 per cent of their ingredients from Nagaland and claim customers have doubled since 2010.

Celebrity chef Sanjeev Kapoor notes that regional fare is closer to the Indian heart than fast food. "Traditional cuisines have unique taste, interesting histories and authentic flavours which have been passed down through generations," he says. "That's why small, indigenous restaurants are picking up."