Grandhi Mallikarjuna Rao (GMR), Chairman of the eponymous group, has put in place an ambitious plan to parlay his Rs 1,700-crore group into a Rs 20,000-crore MNC. Here’s a sneak peek into his plans. 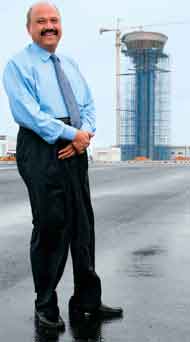 Grandhi Mallikarjuna Rao
On a pleasant saturday morning in mid-September, the newly appointed Chairmen (yes, there are four Chairmen, but more on that later) of GMR Group congregate at Skip House, the company’s headquarters in Bangalore’s central business district to take stock of the latest developments in the booming infrastructure industry. Just a few days after a company-wide re-organisation (and soon after announcing that it had won a $2.7-billion or Rs 10,800-crore deal for the Sabiha Gocken Airport in Istanbul, Turkey), Grandhi Mallikarjuna Rao, the 58-year-old Group Chairman of GMR Group, is chairing the weekly meeting of his inner circle to check on the transformation of the company he started 30 years ago as a jute manufacturer into what could become India’s first global infrastructure player.

The meeting itself is laced with Telugu repartee, but Rao is dead serious about his global ambitions. He has sharpened the company’s focus by dividing it into four groups —Airports, Urban Infrastructure & Highways, Energy & Agri Businesses and Corporate & Internal Services—and appointed professional CEOs for several of his projects to drive growth. “We want to be a global infrastructure player,” Rao says unequivocally, “and we have already begun our journey with the Turkey airport deal.”

The company is looking at other segments to expand its global reach; it is eyeing coal mines in both South East Asia and South Africa to integrate its power business backwards and it is also eyeing other airport projects in West Asia and other fast growing economies. “The competition is much tougher on the global stage. There, we are up against large global infrastructure players and, possibly, some of our partners,” says Rao. GMR has already experienced both of these when a consortium it was part of beat half-a-dozen others (including Frapport, its partner for the under-construction Hyderabad International Airport) to win the contract to upgrade the Sabiha Gocken Airport in Istanbul, Turkey. “We have demonstrated our capabilities in delivering projects on time in India across our businesses. Now, we want to take the next step,” says G.B.S. Raju, Chairman, Corporate and Internal Services, GMR, who also oversees the company’s overseas forays.

Before it can make a global splash, Rao has taken steps to put sufficient management and operational bandwidth in place. Over the last six months, the group has worked with consulting firm McKinsey & Co. to recast its top management and sharpen its focus in each of the segments it is present in. Following this, in early September, Rao took on a less hands-on approach to the company, by becoming GMR’s Group Chairman and appointed four business chairmen to drive the company’s growth. He has also started the process of appointing CEOs for each of its units, who will be responsible for running the day-to-day affairs of the individual businesses. “The business chairmen will have a strategic role and I will only intervene in exceptional circumstances,” says Rao, “but, this is not my first step into retirement; there is a long way to go for us.” While professionalism may be GMR’s new mantra, the company is not going to lose its family moorings so quickly (See “We want to be a global company”).

Rao, who started three decades ago as a jute yarn manufacturer in Rajam, Andhra Pradesh, has transformed the company into one of the best known names in Indian infrastructure. It now boasts a top line of Rs 1,700 crore, but Rao’s ambitions are much larger. He is targeting operational assets worth $10.5 billion (Rs 42,000 crore) in four years, compared to Rs 14,000 crore now. Already, the Hyderabad and Delhi airports, managed by GMR, handle a third of the country’s air traffic; its power stations generate around 4,000 MW of power and it has built and operates 450-500 km of roads across the country.

Now, it wants to expand this footprint, by bidding for new airports to be constructed in Tier II and Tier III towns (in addition to its overseas ambitions), establish a more even fuel balance in its power projects (mostly hydel at present) by setting up thermal projects and, subject to regulations changing, going nuclear and expanding its SEZ footprint nationwide. “We want to add another 5,000 MW to our power capacity and also want to aggressively tap the nuclear power option,” says B.V.N. Rao, Chairman of GMR’s Energy and Agro Business, which contributes the largest portion of the company’s revenues. According to G.M. Rao, several western European countries, including France, have already demonstrated the viability of nuclear power, obtaining 80 per cent of their fuel from this source. “Nuclear power is an emerging opportunity. The peak power deficit is already 60,000 MW, and conventional sources such as hydel and thermal power will not bridge the gap,” says Rao.

Generation is, however, only part of GMR’s focus on the power sector; the company is also looking to add transmission projects across eastern India and coal mines to its portfolio. “We want to be present along in the entire power chain,” says Rao. GMR is targeting around 2,000 km of power transmission capacity.

In the airports segment, meanwhile, Rao has proved that winning the deal to modernise Delhi airport was no fluke by bagging the Sabiha contract against established global players. Now, Kiran Kumar Grandhi, Rao’s younger son, is looking to take the business to the next level by bidding for new projects across the globe. “We have nearly a decade’s experience in executing such projects and we’re poised to take the leap,” Kumar Grandhi says, a touch dramatically. On the anvil are possible deals for greenfield airports in Chennai, Nagpur, Amritsar and Chandigarh. “Growth in smaller cities is dependent on government policy. The Chennai airport project, for example, is stuck in a tug-of-war between the state and central governments,” he grumbles. GMR Airports is also eyeing growth opportunities in eastern Europe and “geographies similar to India”. Elsewhere, the company is also looking to broaden its aviation expertise with a foray into maintenance, repair and overhaul (MRO), in a JV with Lufthansa Technik and a training initiative with Sabena Technics.

The expected boom in GMR’s airports business is closely tied to its initiatives in urban infrastructure and highways. ?gWe want to be the common link for infrastructure and highways. “We want to be the common link for infrastructure growth. There are always connectivity issues when an economy is in a growth phase. We want to fill in the gaps that may occur over the next 5-10 years,” says Srinivas Bommidala, G.M Rao’s son-in-law and Chairman, Urban Infrastructure & Highways. “We plan to undertake projects worth Rs 5,000 crore over the next three-four years; these include elevated highways and sixlane expressways.”

That aside, the company’s sewing up an anchor client for its 3,300-acre SEZ and says that by using arid land, it is minimizing the need for human re-settlement. However, the most critical piece may be the property and construction part of Bommidala’s business, which will focus on developing areas around existing initiatives. In Delhi, GMR will develop self-contained commerical developments called Aero Cities, within the revamped airport, encompassing several developments, including 3,500 hotel rooms, while in Hyderabad, it will construct an “Aerotropolis” around 15 km from the greenfield airport it is constructing. “This will house industries allied to the airport like express cargo,” says Bommidala.

Part of Rao’s strategy also involves garnering more revenues from volumes-driven businesses, rather than relying on guaranteed or annuity revenues from its road businesses. As a first step, it is looking at duty-free stores at its new airports and getting incentives for higher plant load factor (PLF) at some power projects. In Turkey, for instance, the GMR-led consortium (partnered by Limak Insaat Sanavi San Ve Tic A.S. Turkey, which has a 40 per cent stake, and Malaysia Airports Holding) has been given only the terminal to overhaul. So, it will get revenues from hotels, duty -free stores and other retail outlets. “Volumes-driven businesses depend on our ability to drive passengers and customers to our projects and are riskier, but give much higher yields. This will see us move from being an unseen operator to one with a much more visible presence in future,” says Rao.

While GMR’s blockbuster Rs 1,300-crore listing in late July last year helped raise funds for its capitalintensive projects, it has also structured its projects autonomously to allow each unit to easily bring on joint venture partners and private equity funding to sustain their growth. Already, it has tied up with partners for its MRO, Tambaram-Tindivanam Expressway and Delhi and Hyderabad airport projects. “Our strength is project management and we source technical expertise from our partners. This structure also helps us bring investors aboard specific entities,” says G.B.S. Raju. Meanwhile, GMR has sought shareholder approval to raise Rs 5,000 crore from overseas markets and permission to double its debt limit to Rs 10,000 crore. “We are in investment mode now and will require around Rs 35,000-40,000 crore over the next few years to finance our plans,” says G.M. Rao.

Despite Rao’s bullishness on GMR and the infrastructure market, there are several challenges the company faces. Its focus areas, such as SEZs, are controversy-laden and over-regulated; and the private sector is still not allowed to operate nuclear power plants. Management bandwith is also an issue and he will have to do much more before he can honestly call GMR a professionally run company. Rao, however, says that these issues are part of the process of evolution in any growing economy. “Any new infrastructure initiatives always come with attendant obstacles. We have dealt with these hurdles in the past and are confident of dealing with them in future as well,” he says. For now, it is suffice to say that the future looks exciting.

'We want to be a global company'