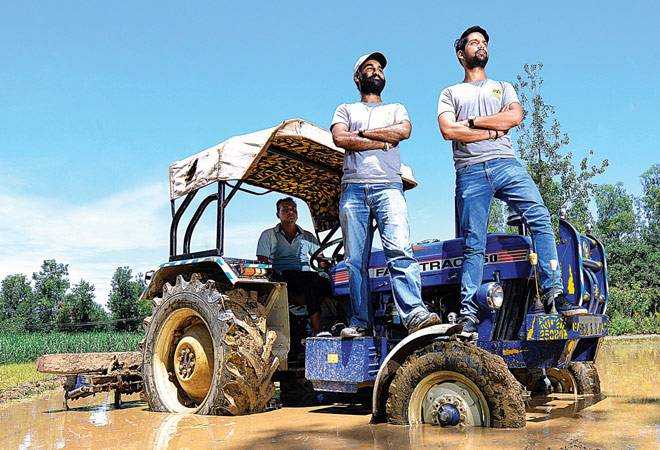 It was during his short stint with Microsave, a consulting firm that specialises in financial inclusion, that 25-year old Alekh Sanghera got a first-hand feel of India's rural economy. Small and marginal farmers, he realised, spent a third of their earnings to hire farm machinery and equipment.

Sanghera's assignment with Microsave required him to travel extensively through the villages of Western Uttar Pradesh to gauge the impact and implications of the government's direct benefit transfer (DBT) schemes. By the time his travels ended, he had an idea to discuss with Mehtab Singh Hans, a classmate and buddy of 16 years. The plan was to draw up a business model that aggregates farm machinery for the benefit of owners by providing them more and consistent income while lowering the rental cost for users. "We (Sanghera and Hans) discussed it with my former boss Lokesh Singh who has a rural background and has worked for more than 16 years handling microfinance and digital payments," says Sanghera.

That's how farMart was born as a technology platform for farmers to rent out their under-utilised machinery to fellow farmers on a pay-per-use basis through call centres and a mobile app.

The three co-founders began with a small pilot for about six to eight months from January 2016 at 10 villages in Uttar Pradesh's Saharanpur district. The operations were controlled from one centre, which served as the physical touch point for farmers, as well as the telephone contact point. In less than seven months, farMart touched over 500 orders at a month-on-month growth of 135 per cent and an average transaction size of Rs 700 from farmers. About Rs 2.5 lakh was the revenue from the Saharanpur centre in 2016/17 and it has been seeing a gross average monthly business of Rs 6.5 lakh in the last three months. So far, the promoters and their institutional investor - Indian Angel Network - have together infused Rs 1.6 crore in the venture.

After a year of operations, farMart has about 100 machinery owners on its platform across three centres and covers close to 125 villages in Uttar Pradesh. "We are servicing around 1,500 farmers with an average land holding of around 2 acres," Hans says.

What difference has it made to an average farmer? The promoters claim they have addressed several issues farmers faced. The platform has, for instance, broken down the barriers of social hierarchy between a small farmer and a large machinery owning farmer. Even when a small farmer used to pay for services, it was considered as a favour to him and he couldn't have raised quality concerns or demanded better service for fear of being ignored next time. With farMart, such farmers have a professional medium to seek quality service. On the other hand, payment used to be a problem for the lenders. The company is ensuring timely payment to all machinery owners and also helping users access working capital credit. The whole process also saw rentals coming down for users while increasing income security for the owners.

Promoting mechanisation is a major contribution of farMart. As part of its inventory management, the company is getting more people to invest in machines with a 15 - 20 per cent assured returns on their investments. farMart charges a 10 per cent commission on the machinery owners' revenue at the moment. "Our tipping point will be about 1-1.5 lakh farmers. We need 6 to 7 farmers from 60 to 70 villages to make operations sustainable for each centre. Then we will be making enough money to meet operational costs," says Sanghera. The promoters and a dozen employees they have hired across centres are reaching out to both farmers and machinery owners, and getting potential investors onto the platform to touch the magic number.

When farMart was launched in January 2016, there was significant emphasis on services that can be rendered through a mobile app. The app continues to be one of farMart's key tool, though it is yet to be the preferred choice for villagers. Only 2 per cent of their partners are active on mobile. "There has to be a behavioral change and we need to inculcate it. A lot of hand holding is required," says Hans.

The company is hoping to perfect a mobile app for machinery owners, which includes geo-spatial technology for precision farming, and build a mobile app for local employees to reduce operational risk. The promoters have plans to test an additional business model by hiring drivers and training them, leveraging the government's National Skill Development Scheme. They want to expand operations to Haryana in the near future. Building partnerships with leading tractor and equipment manufacturers is also being planned.

Going ahead, they intend to add more services to the platform. The aim is to attempt a services model similar to Amazon prime where the enrolled farmer gets to avail special treatment, at attractive price points. The business has a low entry barrier. What provides a competitive edge to farMart is its early presence and penetration. Ultimately, farmers' faith and patronage will remain the key to the long term success of the model.

All Up In The Cloud