Sales of passenger cars in India increased by a third in 2010, but rising fuel prices and shrinking margins for carmakers mean 2011 may not be so hot.

On the outskirts of Raniganj in West Bengal, in the coal belt that the state shares with Jharkhand, a Skoda Auto dealership is coming up. People have already started visiting what will be the first Skoda presence, impatient that the opening is still weeks away. In Asansol and Durgapur, two other border towns, there are a few new models on the roads. The Rudra Hyundai dealership in Durgapur is crowded, even on a weekday. 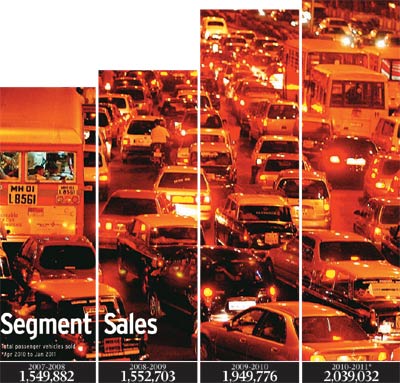 Down south, at Irungattukottai in Tamil Nadu, workers at the Hyundai Motor India Ltd plant are working harder than ever to meet the growing demand. Over the past year, Hyundai, India's largest exporter of passenger cars, actually had to cut back exports to meet local demand.

In north India, passengers taking off from Delhi airport might notice the Maruti Suzuki plant at Manesar in Haryana below them looking like a construction site. India's largest carmaker is investing Rs 10,000 crore to add two new production lines with a rated capacity of 500,000 units a year. Maruti's existing production lines are running well above their rated capacity just to keep up with India's seemingly insatiable appetite for cars.

According to the Society of Indian Automobile Manufacturers or SIAM, the total domestic sale of passenger cars crossed two million in the first 10 months of the current financial year, a growth of 30 per cent over the corresponding period last year. If this momentum continues, sales will touch 2.55 million by yearend. That is one million more passenger vehicles than what was sold in 2007-08, making India one of the hottest car markets. Click here to Enlarge
The Organisation Internationale des Constructeurs d'Automobiles or OICA, the global automobile manufacturers body, sees India as the world's seventh-largest automotive manufacturer (including passenger and commercial vehicles). A recent report by consultancy firm Booz & Company predicts that India will be the fourth-largest car market by 2015, absorbing five to six million vehicles a year by 2020. By 2030, India will be ahead of the United States as a market for cars and second only to China.

While this will invariably lead to congestion on India's already crowded roads and might mean a significant increase in the country's fuel bill unless alternative energy sources are found, it also means that India is a land of massive opportunity for carmakers. Tim Lee, President of General Motors International Operations, who visited India in early February, was extremely bullish about the market. "We are not here to make up the numbers, we are here to develop and sell products that lead their segments," he said.

Yet, while there is still a lot of optimism, rising commodity prices, particularly steel, plastics and rubber, as well as hardening interest rates have led to worries about the future. "There has been pressure on costs and margins for some time," says Arvind Saxena, President of Hyundai Motors India.

"Demand could be dampened by the increase in fuel prices and the rising interest rates on car loans," says Mayank Pareek, Maruti's Managing Executive Officer for Marketing and Sales. Not everyone agrees. Saxena maintains that though Hyundai increased prices of products across its range by two to five per cent last December, demand has not really been impacted. Karl Slym, Managing Director of General Motors India, believes that despite the Reserve Bank of India having raised rates, commercial banks will not tighten car loan rates for consumers.

Rajesh Jejurikar, CEO of Mahindra & Mahindra's Automotive Division, concedes automobile sales growth may slow down this year - but not because of difficult economic conditions. "The base effect will come into play, so the growth percentage will come down, but I really do not feel that the sales of cars or utility vehicles will slow down this year unless economic growth is severely impacted or inflation really shoots up. Interest rates are a concern, but I do not believe that will put off a buyer's purchase decision," he says. Mahindra & Mahindra, betting heavily on growth, is bringing out another utility vehicle to give its Scorpio some company. It is also revamping the Logan sedan, and giving it a new brand name.

Another potential problem could be that of installed capacities. Are carmakers expanding fast enough to meet the demands of the future? Or will other companies also be caught napping the way Chevrolet was by the success of its Spark model, and soon faced long waiting lists? 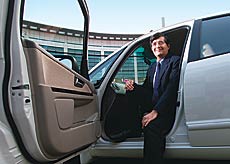 Mayank Pareek, Managing Executive Offi cer, Marketing and Sales, Maruti Suzuki India
Darius Lam, Senior Market Analyst at JD Power and Partners, a market research firm that specialises in the automotive sector, sounds a note of warning. "Component vendors were impacted very badly during the slowdown and while auto manufacturers themselves have added capacity, I do not feel the component vendors have kept pace," he says. Lam expects the market for light vehicles, both passenger and commercial, to grow 17 per cent in 2011 to well over three million units.

With tighter margins, Lam also feels that carmakers may have to 'adjust' the pricing of their products a little. "Yes, there will be competition with new products coming into the market, particularly in the small car and entry-level sedan segment with Toyota coming in, but I believe that despite this, prices will strengthen this year," he says.
Slowdown not a worry
Despite inflation persisting, few in the industry are worried about an economic slowdown similar to 2008. "If you look at the macroeconomic factors, I do not believe we are headed into a similar situation," argues Jejurikar. He expects growth to slow down eventually, but is confident that in the coming months it will remain strong.

The Indian automotive market has matured since the slowdown. Besides, even during 2008-09, passenger car sales did not really fall - the last time this happened on an annualised basis was a decade ago, in 2001-02.

This sector has also seen new market segments emerge - for instance, the 'larger' small car, which has further expanded the market. Products such as the Hyundai i20 have been major beneficiaries of the trend. "Increasingly, customers want the features and functionality of a large car even in a small car," says Saxena.

Jejurikar, whose company does not make small cars, feels that a major impediment to the growth of large car sales is the difference in excise duty between a small and a large car. "The government determines excise rates for a car not on the basis of its fuel economy but on its length," he says. Cars less than four metres long pay 10 per cent excise, while larger vehicles pay 22 per cent. This practice, according to Jejurikar, makes even economical sedans such as the Logan more expensive than they should be. "They can be Rs 50,000 and Rs 70,000 cheaper but for the lopsided excise charge," he says.

Maruti's Pareek differs. "Small cars are a lot easier to manoeuvre on Indian roads," he points out. One curious new trend in the industry has been the growth of the luxury car segment, priced at over Rs 75 lakh. In the past five years, this segment has seen the most growth, albeit from a negligible base. Ashish Chordia, Director at Porsche India, believes this is because Indians are now more comfortable about displaying their wealth and have also acquired a greater understanding of cars. "Why is everybody in this segment coming to India? Aston Martin is launching here soon, too. It is because successful people in India now not only have the confidence to show off their wealth but also a wide range of expensive cars to choose from."

Yet, despite the boom, India still has a long way to go in terms of car ownership. There is enormous potential for long-term growth. "Over the past five years, we have only grown at 13 per cent annually. China grew by 37 per cent every year. Only 14 Indians, out of every 1,000, own cars. Even in Pakistan the corresponding figure is twice that," Pareek says.