In February, while presenting his sixth Union Budget Finance Minister Pranab Mukherjee pegged the fiscal deficit for the financial year 2010/11 at 5.1 per cent. It was significantly lower than the previous year's 6.5 per cent and was largely the result of a better-than projected growth in the gross domestic product, or GDP. Betting that the growth would accelerate, Mukherjee projected the fiscal deficit for FY 2011/12 at 4.6 per cent. The unspoken assumption was that the political unrest in West Asia, which sent crude prices hurtling over $100 or about Rs 4,500 a barrel in January for the first time since 2008, would dissipate soon, and oil prices would not rise beyond the February levels.

Kirit Parikh, Former Member, Energy, Planning Commission
The assumption has been proved wrong, at least for now. West Asia has refused to calm down - in fact, if anything, Libya has flared up. The crude oil that India buys - from a "basket" of countries including a number of them in West Asia - has persisted above the $100-mark. It was at an average of $110.66 a barrel in March. This will indubitably impact the macroeconomic scenario unfavourably. Already, there are stresses following the persistently high inflation of the past year. The headline inflation figure, or wholesale prices' index has accelerated in February to 8.3 per cent year-onyear, up from 8.2 per cent in January.

High international crude prices not only stoke inflation but also substantially raise the risk of a rise in the fiscal deficit, since India subsidises the bulk of its fuel consumption. "Given that the country imports nearly 80 per cent of its crude oil requirement, high oil prices, which constitute a significant part of the import bill, will certainly impact the macro-economy," says Kirit Parikh, former member (energy) of the Planning Commission. Parikh expects oil prices to remain high in the short term.

A report by Singaporebased RBS Asia Securities calculates that a $10 or Rs 45 per barrel increase in the price of crude will add $9 billion or Rs 40,500 crore to the annual import bill, which, in turn, could increase the current account deficit (largely the gap between imports and exports) as a ratio of GDP from 3.9 per cent to 4.4 per cent.

A decision to lift price controls on three sensitive petroleum products - diesel, liquefied petroleum gas, or LPG, and kerosene - could ease the petroleum subsidy bill, which stood at Rs 38,386 crore in 2010/11. But with assembly polls being held in five states, the decision is expected to remain on the backburner at least through April and early May.

Diesel alone accounts for roughly 56 per cent of the subsidy bill. Petrol prices were decontrolled in June last year, which will help the government save Rs 7,000 crore in subsidies in 2011/12. Fearing a political backlash from the cascading impact of higher diesel prices on overall inflation, the government has shied away from decontrolling the price of diesel. But, the fear could be unfounded. "The whole idea that liberalising diesel prices would be inflationary is misleading," says Parikh. The government is wading in a mess of its own creation. By not passing on fuel costs to consumers it is "creating an inefficient oil economy", says Parikh. 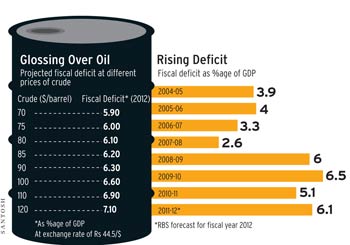 "If the government decontrols diesel prices now, the rate of inflation may rise in the short term, but over the medium term it will be less than the inflation that would be there if the fiscal deficit goes up year after year." In 2010, Parikh led an expert committee tasked with drawing the roadmap for deregulation of oil prices. The panel's recommendations broadly said the government would not have to periodically increase the politically-sensitive LPG and kerosene prices if it decontrols diesel prices and introduces a profit-sharing formula with the upstream public sector explorer ONGC. The committee showed how, by lifting the curbs on diesel price, the government would be able to cap the total fiscal burden of oil subsidies at Rs 23,000 crore.

The only defence of the government's fiscal deficit projections has come from Montek Singh Ahluwalia, Deputy Chairman of the Planning Commission. Ahluwalia recently asserted that the target fiscal deficit of 4.6 per cent of GDP was achievable even if oil averaged $100 a barrel for the whole year. But with a large number of analysts predicting global oil prices to be well over $100 a barrel in 2011- Nomura Securities expects it to touch $220 - experts want the government to pay specific attention to reducing subsidies in the oil sector to rein in the fiscal deficit.

The government's optimistic stance seems to be based on three considerations: favourable outcomes of the elections in the five states, softening of the non-fuel components of inflation, and a sense that the oil market has gotten ahead of itself - given that many advanced countries still have weak recovery from the 2007/08 downturn - and will soon undergo some correction. But in second-guessing the global oil economy, the UPA government might have placed itself on slippery ground. "They can either lose the gamble in terms of international oil prices, or they may feel that the political situation or inflation situation is such as to introduce at least diesel price adjustment. It's certainly a situation that demands active management," says Suman Bery, the recently-retired Director General of Delhi-based National Council of Applied Economic Research.

The trouble with the UPA government's bet is that unlike in the last two years it will hardly have any cushion in 2011-12. "Unlike in the previous financial year when the government benefited from the revenues from 3G licensing and proceeds from divestment of stateowned corporations, the deficit target this year depends on the pace of economic growth and the movement in global fuel prices," ratings agency Standard & Poor's wrote in a note.

High crude prices then may see the government slipping on its targets.