Robots are increasingly being used for dangerous, difficult and painstaking tasks - be it in manufacturing, services or even homes. They can venture fearlessly into areas where human beings dare not tread. After the earthquake-cum-tsunami hit Japan's Fukushima nuclear plant in March 2011, it was not people but a robot developed by Toshiba that went into the radiation-suffused nuclear core to try and cut the nuclear fuel rods into pieces and thereby limit the damage. (It is another matter that the attempt failed and the robot was damaged in the process.) Closer home, the Defence Research and Development Organisation has developed a battery-operated, remote-controlled robot on wheels named Daksh, which is used by bomb disposal units in areas considered too dangerous for Army, police or para military force personnel to physically enter.

Indeed, robotics is making rapid strides across the world, including India, being used in manufacturing, services and even for domestic chores. Most of the leading automobile players in India, for instance, use robots for some of their shop-floor operations, both to save time and reduce human risk - be it Maruti Suzuki at its Gurgaon plant, Hyundai Motor India at Chennai, Ford India in Sanand, Gujarat, or Volkswagen in Pune. Maruti Suzuki has deployed a staggering 1,700 robots. Some of its processes such as painting and welding are almost entirely automated. It has an in-house automation lab that builds robots for specific purposes. "We carefully evaluate areas of production where automation can bring down worker fatigue, enhance shopfloor ergonomics, improve quality and productivity," says a Maruti Suzuki spokesperson. "In the assembly area, where components are fitted to the car, the use of robots totally eliminates error. The robot will always raise an alarm if it comes across a defective part or operation. It also helps workers handle big, bulky parts."

In the service industry, the use of robots is even greater. Robots have been employed in disaster relief, in cleaning rivers and even providing room service in hotels. In some of its Aloft brand hotels overseas, Starwood has deployed a robotic bellhop called Botlr, which delivers orders - keyed in through smartphones - to customers' rooms. Supply chain management is another area where robots are rapidly gaining ground, thereby enabling warehouses to make faster deliveries.

Gurgaon-based GreyOrange, for example, started in 2009 by two Birla Institute of Technological Sciences graduates, Samay Kohli and Akash Gupta, has built two robots, Sorter - which sorts products at warehouses - and Butler - which delivers them. The Mahindra Group, e-commerce giants Flipkart and Jabong, courier majors Aramex DTDC, gojavas and Delhivery, global supply chain Kerry Logistics and many other biggies use GreyOrange robots. "Traditional warehouses are crippled by challenges of pilferage, billing disputes, workplace hazards and overall inefficiencies," says Yaduvendra Singh, Global Head and VP, Sales, Marketing and Solutions at GreyOrange. "Using robots, some of the high-volume, repetitive and time consuming operations at warehouses can easily be automated." 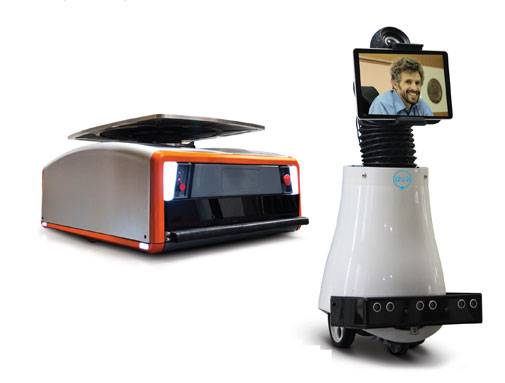 GREYORANGE BUTLER A service robot that streamlines and accelerates the order fulfilment process; I2U2 A telepresence robot that can be controlled with a smartphone, tablet and PC, when connected through an app

Health services, too, are finding increasing use for robots. "Surgical robots are self-powered, computer-controlled devices that can be programmed to help in the positioning and use of surgical instruments," says Dr Anant Kumar, Chairman - Urology, Renal Transplant and Robotics, Max Hospital, Delhi. Indeed, robots' hands are more dexterous than those of humans and are of particular use in laparoscopic surgeries. "Robotic hands enable us to operate within very restricted spaces in the body, which would otherwise be accessible only through open-or long-incision surgery," he adds. "This makes the surgery more precise and lowers blood loss." The same is true of education: domestic companies Milagrow Humantech and Omnipresent Robot Tech have launched educational robots that teach the basics of robotics. Again, robots are not just physical hardware. Software robotics (also called bots), particularly the process called Robotic Process Automation (RPA), is being used by BPOs, banks and other financial institutions to reduce human involvement in repetitive tasks. ICICI Bank, for instance, has over 200 software robots performing over a million banking transactions daily - mostly high-volume and time-consuming business tasks cutting across multiple applications. "Currently, around 10 per cent of all our routine transactions are carried out by software robots, and by the end of this year it will be 20 per cent," says Anita Pai, Senior General Manager and Operations Head, ICICI Bank. "Using software robotics improves productivity and frees up our employees so their talents can be used better. Our response time for customers has also been reduced by about 60 per cent since we began using robots."

Home cleaning robots, too, have made a beginning in India. Milagrow has launched floor cleaning, glass cleaning, lawn clearing and pool cleaning robots, but it also has competition from the likes of iRobot, launched by the US-based iRobot Corporation. These robots have inbuilt sensors to map an area and clean on their own without human supervision. There are also telepresence robots, which can be remotely controlled by a human operator using a smartphone app, and which enable the user to see and hear whatever is happening. without being physically present. The best known among them is I2U2, launched by the company of the same name in 2012. "This robot can be a security guard patrolling your house, keeping you informed of whatever happens within," says Aman Kajaria, Co-founder, I2U2. "It can be programmed to give reminders to people to take their medication. It can answer questions on your behalf when you are not physically present."

The global robots market, including components and applications, is expected to grow at a compound annual growth rate of 16.31 per cent between 2015 and 2020, to reach $10.6 billion. Many believe robotics is still at the cusp of discovering its potential. "The present generation of robots are mostly used for repetitive functions," says Singh of GreyOrange. Most of them still do not operate entirely on their own, but are watched over and coordinated by humans. But they are rapidly learning from their surroundings and working out solutions themselves based on calculations. "Cognitive computing in robotics can empower machines to understand natural language and learn how humans communicate. Using it, robots can scrutinise and answer questions in real time," says Prativa Mohapatra, VP, Cognitive Solutions, IBM India.

The future is limitless. "With machine learning and artificial intelligence capabilities, future robots will learn from past usage patterns and become much more equipped for complex tasks," says Singh. Rajeev Karwal, Founder-Director, Milagrow, is even more emphatic. "Most current robots remain stationary," he says. "But in future there will be robots which are completely independent and capable of moving from one point to another. They will be intelligent with no manual controls for human interference. Hardware is not a challenge. With proper software and enhancements, robots will evolve."

In fact, there are some independent robots already. Pepper, designed by France-based Aldebaran Robotics, was originally intended for Softbank Mobile's retail stores in Japan, but has now also been marketed as a companion for personal use. Similarly, Jibo, being developed in the US by Cynthia Breazeal and team, is a social robot that understands statements and responds accordingly. Samsung and Asus, too, are developing similar bots. India is not too far behind - at IIT Mumbai's TechFest 2015, Diwakar Vaish, Head of Robotics and Research at Delhi-based A-SET Training and Research Institute, displayed a 3D printed humanoid robot, which he called 'Manav'. This robot can sense what its user is thinking and even display emotion. Manav is also less expensive than its counterparts.