Gone are the days when telecom was a money-making business. Now, it's all about bickering, losses and regulatory uncertainties.
By Manu Kaushik | Print Edition: March 26, 2017 You may as well put the money in a bank, get a decent return, and go out and play golf," Sunil Bharti Mittal, Chairman, Bharti Airtel, said at the recent Mobile World Congress in Barcelona. He was referring to low returns in the telecom sector. According to estimates, Airtel's return on capital employed was about 9 per cent last year, almost similar to bank fixed deposit rates (7.5 per cent) and far lower than the global average of 20 per cent.

The biggest reason for the telecom sector's troubles now is the aggressive entry of Reliance Jio, the $21-billion start-up backed by Mukesh Ambani-controlled Reliance Industries Ltd. Jio has been offering everything - voice, data and a bouquet of other services - free since its launch in September 2016, putting brakes on the march of the biggest incumbents - Airtel, Vodafone India and Idea Cellular. Airtel reported a 54.9 per cent drop in net profit in the third quarter of 2016/17. Idea reported a loss of `383 crore, its first-ever quarterly loss since listing, while Vodafone, which has hardly registered a net profit since its entry into India, recently took a five-billion-euro write-off on account of its India business. Industry players do not expect things to change for the better anytime soon.

Industry association Cellular Operators Association of India, or COAI, says the sector has been going through a turbulent phase due to rise in the intensity of competition and unforeseen events such as demonetisation in the past few months. The reduction in overall tariffs, say experts, has resulted in significant revenue loss. In the third quarter, for instance, industry adjusted gross revenues, or AGR, fell 5.9 per cent to `34,600 crore. The fourth quarter is expected to be similar; revenues are expected to dip further. "Many operators are incurring losses on investments. This has put a question mark over their expansion plans too. We do not expect the situation to stabilise until the government takes immediate measures," says Rajan S. Mathews, Director General, COAI.

The problems the sector is facing today, such as intense competition and the resulting fall in tariffs, are not new. It is just that the Jio launch has made them worse.

Till about last year, the lowest call tariff was 45 paise per minute (data at four paise per 10 kilobyte), a sharp drop from `6-8 per minute in 2002. Now, Jio is charging nothing for voice calls and nearly 1 paisa per megabyte for data. This has forced other players to reduce tariffs to keep their subscriber base intact.

In the process, the average realisation per minute has fallen. Ratings agency India Ratings says voice realisation is expected to drop to 25-28 paise per minute in 2017/18 from 30-35 paise at present. "A 20-30 per cent decline in data tariffs will pull down the average revenue per user despite higher volumes from data usage," it said. 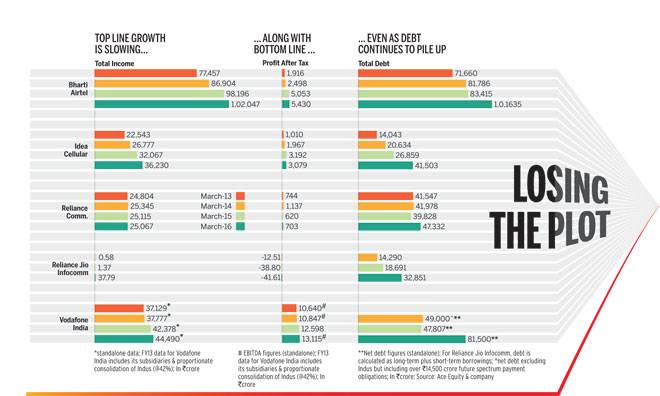 The usage per subscriber (for both voice and data) is rising but not translating into higher revenues. Recently, Airtel, in response to Jio's tariff plan, slashed international roaming rates by 90 per cent and made national roaming free. The impact is yet to be seen.

"India is a particularly challenging market for telecom operators due to several reasons. Spectrum is expensive and tariffs are the lowest in the world. Rising volumes are also not helping," says Mahesh Uppal, the founder of telecom consultancy ComFirst India.

The latest round of trouble started in 2010 when operators bid aggressively in 3G and 4G spectrum auctions. Then, in the subsequent five auctions between 2012 and 2016, they bought more spectrum at astronomical prices to expand and strengthen networks. These purchases were largely funded through debt. The auctions got the government decent revenues but left the operators financially stretched.

This would not have mattered if the debt-paying capacity of operators was improving. It is not. Kotak Institutional Equities Research has estimated that revenues will fall for the next three years ending 2018/19. In 2015/16, the sector's annual revenues were `1.81 lakh crore. Kotak expects voice revenues to almost halve over the next five years.

While it is Jio now, in 2009, it was Tata Docomo, which disrupted existing business models by launching per-second billing, triggering a crash in tariffs. But back then, the voice market was growing fast, and higher volumes compensated for lower tariffs to a large extent. Now, while voice is becoming free, the data segment is looking at a crash in tariffs in response to Jio's dirt-cheap prices.

Rishi Tejpal, principal research analyst at Gartner, says Jio's price play is not going to work in the long term. "It will continue for some time before the competition cools down," he says. But nobody knows how long it will take for competition to stabilise. "Jio is not in the business for charity. One has to assume that even if it is cash-rich, a public listed company has to worry about shareholders returns," says Uppal. "It's not happening in the next six months or so," says Tejpal.

The sector is burdened with huge levies. There are a bunch of them - licence fee, spectrum usage charge (SUC), and contribution to the universal service obligation fund (USOF). Nearly 11 per cent revenues go to the government as levies. This is apart from direct and indirect taxes. For instance, the licence fee payout, including SUC, was `9,300 crore in the last two quarters. The sector has been demanding a reduction in SUC and USOF burdens. Last year, it pitched for a 1 per cent SUC charge (on adjusted gross revenues) but the government chose the weighted average method, which is costing the companies more. It also asked the government to reduce the USOF contribution from 5 per cent to 3 per cent.

"High SUC creates stringent barriers for operators to invest in infrastructure. In countries where spectrum is acquired through auction, SUC is only levied only for recovering administrative costs," says COAI's Mathews.

"The current challenges are not due to demand issues. Demand is high and rising. The licensing regime has created huge anomalies that are restricting growth," says ComFirst's Uppal.

In a recent report, global telecom body GSMA said a reduction in the SUC from the present complex regime to a uniform 1 per cent rate would have a positive impact in terms of data penetration, mobile revenues, investments and tax revenues.

The government is over-cautious in paying heed to the demands of operators, especially after the 2G scam. A case in point is last year's spectrum sale when the telecom department rejected the sector's demand for postponing the auction as the companies had little money left after paying for spectrum and acquisitions in the previous years. As a result, the response was muted, and the government could get bids worth only `65,789 crore as against the expected `5.63 lakh crore (at base price).

India's telecom story had attracted a large number of foreign entities. Almost all of them, barring Vodafone, have exited after suffering big losses. It's expected that the sector will have four-five players by the end of this year, less than half the peak.

Consolidation seems the only way out. Vodafone is purportedly joining hands with Idea; Airtel has acquired Augere Wireless, Telenor India and the spectrum of Aircel and Videocon Telecom; Reliance Communications is proposed to be merged with Aircel and MTS India.

But will consolidation benefit operators? "The reduction in the number of operators will help telecom companies get better returns, improve cost efficiencies and reduce competition," says Tejpal. For instance, consolidation will bring down interconnection usage charge or IUC. Telecom companies pay each other IUC for allowing calls from each others networks. Spectrum requirements and spectrum costs will also fall. Five entities with 130 MHz each will be in a better position than 13 entities with 50 MHz each. "The fall in operational costs will have a direct impact on bottom lines. In this market, where tariffs are so low, volumes are important. Inorganic growth can help telecom companies build scale," says Tejpal.

Most countries have three-five operators. Some - US, Hong Kong and the Netherlands -have seen consolidation in the past few years. In the long term, says Uppal, consolidation will result in telecom operators raising prices in tandem to recover their investment costs. "The pressure on tariffs is likely to ease," he says.

Even if consolidation brings scale, lowers costs and returns pricing power to the companies, one threat will remain - changing technology. At a time when telecom operators are yet to finish 3G and 4G deployment, the market is already moving towards 5G. The government is looking at a fresh round of spectrum auction between July and December with focus on 5G. This means operators will have to invest again to upgrade networks.

Tarun Pathak, Associate Director , Counterpoint Research, says technology risk will always be there. "If the government is going to auction 5G spectrum, the market has to be ready. For example, in the last auctions, nobody picked up 700MHz as the market was not ready. I think it will take a few more years, until 2019, before the 4G market matures," he says.

"Technology is changing fast. Over-the-top services are eating into telecom companies' revenues. The cellcos have to take a call on whether they are ready for 5G," says Uppal.

There's a joke that the telecom sector is so litigious that often lawyers specialising in telecom make more money than the CEOs. With such large-scale consolidation happening, embattled CEOs might now have to compete with investment bankers as well. ~