Rural, agriculture and allied sectors get top priority. The allocations are tilted towards schemes and projects that have already been prioritised.
by Joe C. Mathew | Print Edition: February 26, 2017 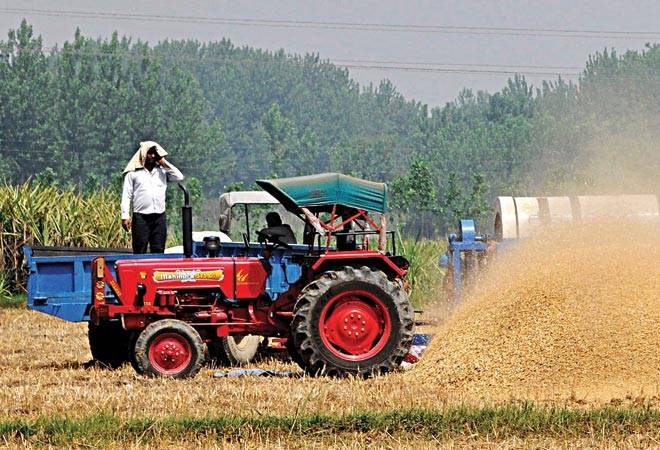 What is the most striking farmer-friendly measure in Budget 2017/18? Ashok Gulati, former Chairman of the Commission for Agricultural Costs and Prices, says it is "the recognition of the value of water".

Gulati is referring to three initiatives meant to augment irrigation infrastructure - two ongoing and one new - that received budgetary support of over Rs 32,000 crore. The first is doubling of the corpus (from Rs 20,000 crore to Rs 40,000 crore) of the Long Term Irrigation Fund managed by the National Bank for Agriculture and Rural Development (Nabard). The apex development bank will get another Rs 5,000 crore as initial corpus to set up a new Micro Irrigation Fund. The third comes in the form of a 42 per cent higher allocation (Rs 7,377 crore as against the 2016/17 revised estimate of Rs 5,189 crore) for the Pradhan Mantri Krishi Sinchai Yojana (PMKSY).

These three schemes illustrate the broad manner in which allocations to Finance Minister Arun Jaitley's priority sectors - agriculture/allied and rural development, which received a total allocation of Rs 1,87,223 crore, 11.6 per cent more than the revised estimate for 2016/17, have gone this year. In general, most allocations have been made to further support the existing schemes. There has been a substantial increase in allocations to some projects such as the PMKSY, but in most cases, the attempt has been to sustain spending rather than effecting sharp spikes in allocations. This is true even of the rural job guarantee scheme. The MNREGA allocation has been increased 25 per cent over last year's Budget allocation, though the rise over the actual money spent in 2016/16 is minuscule. "At first glance it would seem as if the allocation of Rs 48,000 crore for MNREGA is a dramatic increase of nearly 25 per cent over last year's allocation of Rs 38,500 crore. In fact, the increase is a mere 1 per cent, or Rs 500 crore, as two supplementary allocations during the course of the year had taken the total 2016/17 spending Rs 47,500 crore," says social activist Aruna Roy.

Such technicalities, however, are not bothering the wide range of industries and businesses that find the government's rural push good enough for creating new revenue-generation opportunities. "With large allocations for agriculture, rural road infrastructure, skill development and electrification, this Budget has the potential to change the face of 'Bharat," says Pawan Munjal, Chairman, CEO & MD, Hero Motocorp. "Clearly, government spending in schemes such as MNREGA and the Pradhan Mantri Awas Yojna is the highest ever. This will boost core sectors such as rural, agriculture, steel, manufacturing and increase consumption in rural India," he says. Munjal, whose company makes two-wheelers, says "schemes for the manufacturing sector, combined with social sector initiatives, will ensure robust growth for the automobile sector catering to rural India, both in two-wheeler and four-wheeler segments".

The government also highlighted the need for more credit availability to the rural sector, quality post-harvest infrastructure, and digitisation and modernisation of markets to double farmers' incomes. "For a good crop, adequate credit should be available to farmers in time. The target for agricultural credit in 2017/18 has been fixed at a record level of Rs 10 lakh crore," Jaitley said in the Budget speech.

One of the major initiatives that can transform this segment is the modernisation of primary agriculture credit societies (PACS), which cater to the credit needs of about 40 per cent of the country's small and marginal farmers. Jaitley announced a plan to computerise and integrate all 63,000 functional PACS with the Core Banking System of District Central Cooperative Banks. The three-year project, estimated to cost Rs 1,900 crore, is expected to ensure seamless flow of credit to small and marginal farmers.

Crop insurance is another area the Modi government has been focusing on ever since it came to power. The farmers, too, are increasingly finding the government's Fasal Bima Yojana useful; the target is to increase the coverage from 30 per cent of the cropped area in 2016/17 to 40 per cent in 2017/18 and 50 per cent in 2018/19.

"A large budgetary allocation of Rs 1.87 lakh crore to the agriculture and rural sector, an increase of 24 per cent over last year, reflects continued commitment to the progress of farmers," says Raju Barwale, Managing Director, Maharashtra Hybrid Seeds Company Private Ltd (MAHYCO). His only complaint is that the seed sector did not get attention. "Seed innovations need to be encouraged and promoted as seeds are and will continue to be a critical part of the strategy to double farmers' income through improved productivity," he says. 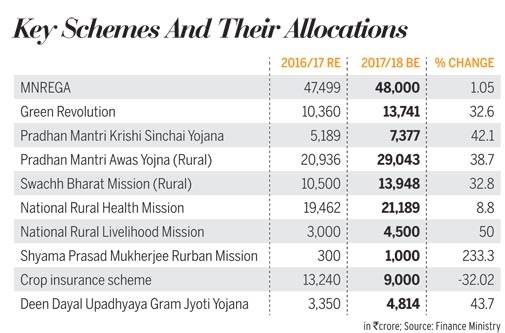 The government wants to double the number of e-mandis from the 250 National Agricultural Markets (e-NAM). Assistance up to Rs 75 lakh will be provided to every e-NAM market for building cleaning, grading and packaging facilities. "The initiative to set up processing units will reduce post-harvest losses," says Sandeep Sabharwal, Group CEO, Sohan Lal Commodity Management.

In 2019, when the nation celebrates the 150th birth anniversary of the father of the nation, Mahatma Gandhi, is also the time when the Modi government will complete its five-year term and face general elections. Going by the budgetary targets for rural India, the majority of the country's population should see a massive transformation in their lives, skill sets, health and hygiene by then. At least that is the plan.

To this end, the Budget talks about bringing one crore households out of poverty and make 50,000 gram panchayats poverty-free by 2019; it promises to build 15 lakh farm ponds under MNREGA by 2017/18. Every habitation with more than 100 people will have a road connection. The Pradhan Mantri Awaas Yojana - Gramin, the allocation for which has been increased from Rs 15,000 crore in 2016/17 BE to Rs 23,000 crore in 2017/18, has a target to build one crore houses by 2019. All villages will be electrified by May 1, 2018. These are the targets. But has there been a matching increase in allocations?

Aruna Roy and her coalition of social organisations say the allocations hardly match the ambitions. "We will end the year with close to Rs 13,482 crore pending MNREGA payments and a budgetary allocation that has not kept pace with the last year's amount in real terms," she says.

The allocations to the much-publicised crop insurance scheme fall in this category. The government has allocated only Rs 9,000 crore (32 per cent less) for the scheme this year. "Our calculation is that Rs 13,000 crore is the minimum that you will require in 2017/18," says Gulati.

Still, industry is not complaining. "From earthmoving and construction equipment industry's perspective, we have seen the roads and highway sector leading the momentum. However, for sustainable growth, other sectors needed attention. With this Budget, the focus has broadened, and now includes railways, agriculture and real estate," says Vipin Sondhi, Managing Director & CEO, JCB India Ltd. The rural sector should provide business opportunities for agri-machinery firms, custom hiring entities, warehouse infrastructure operators, and many others, in the coming days. Higher rural earnings due to road, housing and pond construction projects will also attract fast moving consumer goods firms to the country's hinterlands.

Anil Rai Gupta, Chairman and Managing Director of consumer durables company Havells India, says the balanced and inclusive Budget, with emphasis on rural India and infrastructure, will boost consumption-led demand in the economy.~

A Culture of Violence