Jack in the box

It's 11 in the morning and business as usual at the ground floor office of Sahara India in Tardeo, Mumbai. The staff is unfazed despite the February 13 order of the Securities and Exchange Board of India (SEBI) to freeze the assets, bank accounts and demat accounts of the group's two unlisted companies and their top executives, including Managing Worker and Chairman Subrata Roy.

The market regulator's move, its first such, came on the back of the Supreme Court order that Sahara India Real Estate Corporation (SIRECL) and Sahara Housing Investment Corporation (SHICL) return Rs 24,000 crore raised through optionally fully convertible debentures (OFCDs) from 30 million investors. "The stipulated time to return the money to investors had come to an end and there was no response from Sahara. We had to follow what the Supreme Court had ordered," says a SEBI spokesperson.

At the Tardeo office, there is a reference to the SEBI order only when stray depositors , mostly from the lower middle class, walk in seeking assurance that their money is safe. Most of them have had a good experience with the group and are eager to accept the executives' explanations. Those who are not, are told they can withdraw their money.

"It no longer bothers us," says a senior executive in the office. "Do you see a rush at my door? We have already repaid investors who wanted their money back."*

The Q Shop is the group's new retail foray.

Three days after the Sebi order, Sahara published advertisements in newspapers saying it owed no more than Rs 3,663.93 crore to the debenture holders.

"As mentioned in the advertisement, more than 50 per cent of this amount is no longer an outstanding liability since the company has repaid its distant rural area investors and such amounts are in the process of multipoint verification. We had declared Rs 2,620 crore as liability and Rs 2,500 crore as buffer and this buffer covers the amount which is mentioned above. 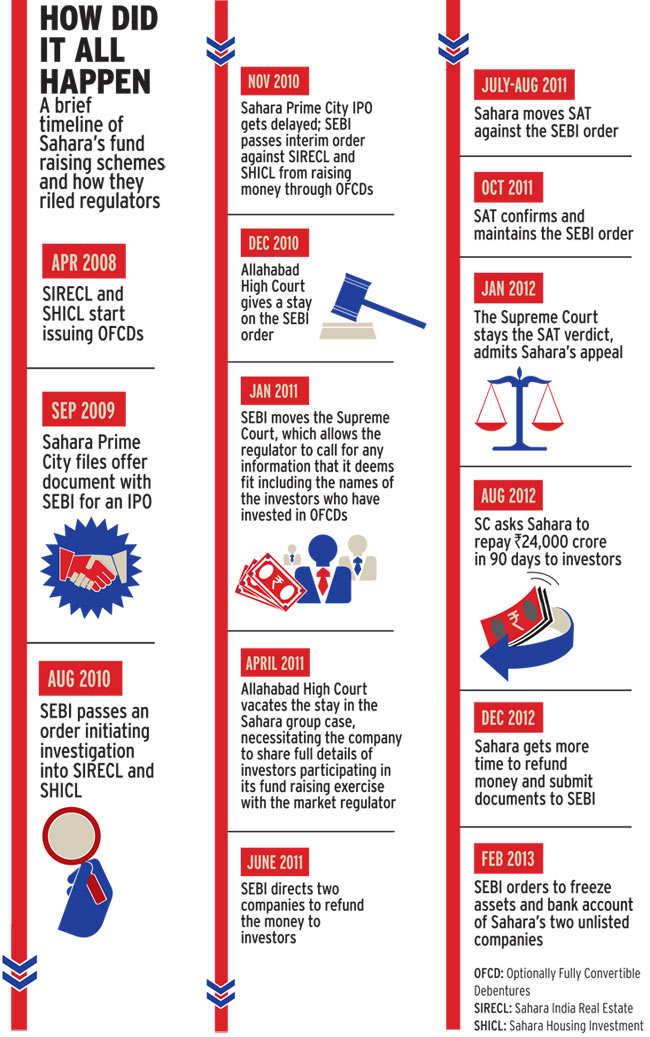 As per the advice of our legal team based on the demand of the Hon'ble Supreme Court, we have clubbed the two in declaring our outstanding liability. But the fact is that the outstanding liability is much lower than Rs 3,663.93 crore and also correspondingly the interest amount is much lower," Abhijit Sarkar, the group's head of corporate communication, says in an email.

Only time - and the Supreme Court, where the matter remains open - will tell which is right, Sahara or SEBI. But this is only the latest in a long line of Sahara's brushes with regulators. And so far the group has always found a way around the roadblocks. Application forms of Sahara group's various deposit schemes
SIRECL approached the market in 2008 and SHICL in 2009 to raise money by issuing OFCDs to investors under the preferential allotment rules applicable to unlisted companies. The permission to the former was given by the Registrar of Companies (ROC) in Uttar Pradesh and Uttarakhand, and to the latter by the ROC in Maharashtra. However, in 2009, when Sahara Prime City, another company of the group, planned an initial public offering, SEBI found inadequacies in disclosures and sought information about some Sahara companies as per norms. Till date, the IPO hasn't hit the market.

It seems one Roshan Lal of Indore had written to the National Housing Bank asking whether the debentures had been issued according to rules. The NHB forwarded his note to SEBI, which asked for details of the people to whom the debentures had been issued. It said the OFCDs fell under the category of public issue, and not preferential allotment, since they were issued to more than 50 investors.

This was the time when debate raged over who had jurisdiction over this. At first the ROCs were thought to be the regulator concerned, as SEBI looked mainly at listed entities. One view was that privately placed debentures issued by unlisted companies fell under the Ministry of Corporate Affairs. Finally, the Supreme Court went with SEBI.

With the details of the investors not forthcoming, SEBI told the two companies to refund the money. The case went to the apex court, which ruled in favour of the regulator.

Sahara says this must not be seen as a tool to sidestep SEBI. "SCCS was formed on March 5, 2010, whereas SEBI had issued objections on the Sahara group's two companies with regard to OFCDs in May 2010," says Shantanu Mukherjee, the cooperative's Managing Director, in an email.

SCCS has a bunch of schemes to raise deposits. The fixed deposits are similar in structure to the bonds issues by SIRECL and SHICL. Sahara E. Shine is like the Abode bond issued by SIRECL. It is sold as an eight-year fixed deposit promising a return of more than 226 per cent. The catch is that, unlike bank fixed deposits, you can't withdraw your money before the fifth year. In fact, there is a lockin of five years in most of the SCCS's fixed deposit schemes. The Sahara M. Benefit is similar to the old Sahara Real Estate Monthly Plan of SIRECL.

Sahara U. Golden in many ways corresponds to the erstwhile Housing Bond of SHICL and sells like hot cakes. Mukherjee dispels any notions that may arise from the similarities in the old and new instruments. "The contention that SCCS is raising money for the real estate business is beyond truth. SCCS is functioning only among members and it is functioning under the object clause defined in its registered bye-laws approved by the Central Registrar of Cooperative Societies."

Under the law, SCCS can't accept deposit from the public, only from its members. A multi-state credit cooperative society can keep adding new members. Whenever a new investor buys a fixed deposit scheme, a membership form has to be filled by him.

"The society has a good track record of repayment of deposits to its members without any delay and there is no complaint filed by a single member for any default till date," says Mukherjee. It is not difficult to find executives at the Tardeo office selling SCCS's schemes. In fact, Business Today managed to buy one there. But the cooperative is supposed to be at arm's length from the group. "SCCS has been promoted by the workers of Sahara India Pariwar. We have asked the group to allow the use of the word Sahara in the co-operative's name, which was allowed against a small royalty. The promoter's family members or senior promoters of the Sahara group are not there in the promotion of the cooperative society," says Mukherjee.

The cooperative's salesmen are as quick as any in the business to catch on the trends. Last year they were taking advantage of the rising gold prices by collecting deposits from investors on the assurance of giving physical gold at the end of five years. Then there is the Q Shop initiative.

The gold back schemes under Sahara Q Gold Mart offer an additional six gram of physical 22 carat gold at the end of five years for an investment equivalent to the current price of gold per 10 gram. But with gold prices coming down the salesmen are not keen to sell the scheme anymore.

It is not just the high interest rates that attract investors. Many of them are daily wage earners, small traders, and other lower-middleclass people. There is little chance that they can set aside a fixed amount for saving every month. Many of them do not even have a bank account.

This is where the Sahara group has stepped in to take advantage of an underdeveloped banking system. It reaches out to people in regions where there is no bank, or a lot of people without bank accounts. And they make tiny deposits - of Rs 10, Rs 30 or Rs 100 - every day.

As Subrata Roy has described, the group has faced several doors slamming in its face as it has switched from one route to another to raise money from the public. But it has always found a way out. No wonder the Tardeo office is sanguine. Meanwhile, Enam, Sahara's merchant banker, tried to reach Roshan Lal at his address in Indore, but found no one there.

*An earlier version of this story suggested that the Sahara Q Shop, the Sahara Group's consumer retail arm, ran a fixed-deposit scheme that offered 2.35 times return in six years.

The Sahara Group has clarified that Sahara Q Shop does not run a fixed-deposit scheme. The returns mentioned in the Q Shop Plan-H certificates are loyalty points and not cash.

India Inc makes the most of the Maha Kumbh