It was among Indian IT’s most promising companies, but turmoil in its key markets and some costly misses have plunged the Bangalore-based firm into a battle for survival.

Rajiv Mody
Rajiv Mody, the beleaguered Founder-Chairman and CEO of Bangalore-based Sasken Communication Technologies, got yet another shock recently. Hari Iyer, Sasken’s HR Head, who had been with him since the day he had set up Sasken 20 years ago, had put in his papers. Over the past few months, Mody had seen a host of top managers head for the exit and the share price head for the pits even as he grappled with the market regulator to clear a buyback and pleaded with edgy customers to hang on. The normally even-tempered Mody finally lost his cool and had a furious exchange with his remaining managers as he looked for ways to reignite growth.

Cut to late 2005, it appeared then that Sasken, which provides software services and products to the communication industry, could do no wrong. On September 20 that year, the company’s stock sizzled on debut, listing at Rs 400, a 54 per cent premium to its Rs 260 offer price and the issue was oversubscribed eight times. In the next few months, the stock soared above Rs 600 and had investors scrambling to get aboard. 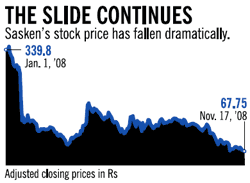 Three years on, one indicator tells all: Sasken’s stock was trading at around Rs 60 levels in late November (it closed at Rs 57.20 on November 19, down 84.54 per cent from the 52-week high of Rs 370 it hit on April 1 this year on the BSE. The firm had wrapped up a Rs 15.5 crore share buy-back to try to prevent a further erosion in its share price. Sasken’s woes began in 2007, when most of its usercompanies— mobile handset manufacturers and service providers— were forced into consolidation mode and began opting for operating systems from the likes of Microsoft (Windows), Symbian, Apple and most recently Google (Android). Sasken, which was building its own software package, found itself out in the cold.

Consolidation Setting In
“Consolidation has completely changed the contours of the communication market,” says Mody. And what a consolidation! Lenovo, which had partnered with Sasken to enter the mobile handsets market, suddenly decided to pull the plug on the project in the face of strong competition from existing players such as Nokia (incidentally, Sasken’s #1 customer), Samsung and Sony Ericsson. An initiative, called E series, which was to build a software platform for mobile handsets, was trashed. “We had spent Rs 40 crore on this initiative,” says Mody. CFO Neeta Revankar adds a touch wistfully: “Perhaps, we were a little late in this investment.”

Click here to Enlarge
As competition intensified and the consolidation continued, Mody tried to hang on to customers by selling them significant stakes in the company, diluting up to 9-10 per cent to the likes of chipmaker Intel, Nokia and Canadian Internet gear maker Nortel. But with user industries beset by their own problems (Philips’ spin-off NXP Semiconductors, STMicro and Ericsson, for example, talking about an alliance to build enough scale to survive), it was inevitable that Sasken also caught the virus. “Our customers are taking longer to decide on projects, spending less on R&D and rationalising their (IT) vendors,” admits Mody.

Customer Turmoil
Nokia cashed out its investment in the company in the middle of this year and moved several projects to its captive centres. The flux in the handset market, with one-time hotshot Motorola getting overshadowed by Samsung and Sony Ericsson over the last couple of years, gripped Sasken also. “There is no certainty in the market today,” grumbles Revankar, adding: “We need to be conservative and hope the gloom lifts sometime soon.”

Before that happens, Sasken will need to quickly find new markets to sustain its growth. Already the numbers are looking ominous, with margins and profitability shrinking and attrition soaring. Sasken’s net margins had dropped to just 5.88 per cent in the second quarter of 2008-09, from 10 per cent a year ago. While this number slumped to as little as 2.73 per cent in the third quarter of last fiscal, it improved for three consecutive quarters before dropping alarmingly again. Revankar blames the yo-yo margins on unpredictable forex movements. “Twelve months ago, the rupee was at Rs 39 to the US dollar, today it is Rs 49; we had hedged at Rs 41-42. We have decided to focus on the business risk and not on the accounting risk.”

Stocking up or selling out?