On the right track

Several large infrastructure projects are almost ready to start operations. This bodes well for a new government and, potentially, for the Indian economy.
Anilesh S. Mahajan | Print Edition: May 25, 2014 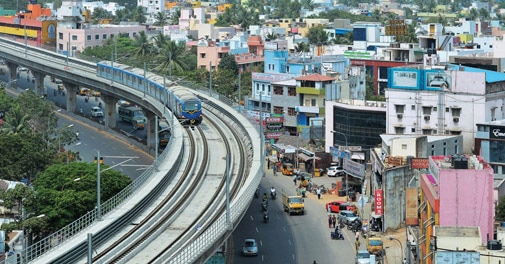 The last two years of the outgoing United Progressive Alliance government were marked by a policy paralysis and high interest rates that dragged economic growth down and choked investment. The impact was felt particularly in the key infrastructure sector - latest government data show annual output growth of the infrastructure sector slumped to 2.6 per cent in the year through March from 6.5 per cent in the previous year.

There are, however, a number of projects that are almost ready to start operations and will provide an immediate fillip to sectors like energy and transport. These projects will also provide a new government that will take office after the general elections end in May some breathing space to chalk out a detailed plan to accelerate economic growth. Overall, infrastructure projects worth more than Rs 1.5 lakh crore are ready to start operations by the end of 2014, according to the Cabinet Secretariat's estimates. Business Today combed through the list of such projects and found some bright spots in an otherwise gloomy economy. 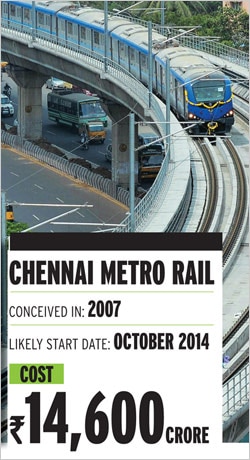 MUMBAI AND CHENNAI METRO RAIL
Two of the country's biggest cities - Mumbai and Chennai -- will get metro rail networks in the coming year. "In both cities, the first phase of the metro is nearing completion. The projects would help ease the traffic scenarios," says Manish Agarwal, who leads PricewaterhouseCoopers India's infrastructure practice.

Mumbai Metro will be the first off the blocks. Mumbai Metro One, a subsidiary of Reliance Infrastructure, has completed the safety audit and trial runs for the 11.4-km-long Ghatkopar-Versova line. The project is running two years behind schedule and its cost has escalated to more than Rs 4,000 crore from the initial estimate of Rs 2,356 crore. Company executives say they are ready to start commercial operations as soon as they get the green signal. "We are expecting these clearances to come after the elections," says a company executive.

The Chennai Metro is likely to begin operations by October. Chennai Metro Rail Ltd has started trial runs on a 10-km stretch that connects Koyambedu and St. Thomas Mount in the city. The company is confident of starting commercial operations of a second line that will connect the airport in another six months. "By 2016, the entire phase with all the underground stations will be functional," says a company executive. 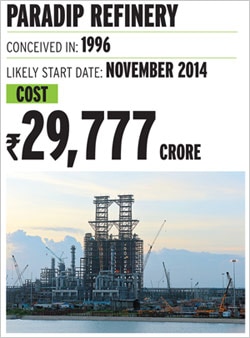 PARADIP REFINERY
Indian Oil Corporation (IOC) will start commissioning tests for the Paradip refinery, in Odisha, from July and expects to make it fully functional from November. The refinery can process 300,000 barrels of crude oil a day and will help meet rising demand for fuel products in the country. It will also help IOC to diversify its supply sources as it can process heavy and dirty crude produced in Latin America.

The previous deadline to commission the refinery in December last year could not be met due to the devastation caused by Cyclone Phailin. "We were ready to test the equipment, but because of the cyclone the employees had to be evacuated," says a senior IOC executive. "Many contract labourers did not return at all. The subsequent rainfall led to water-logging in critical areas of the refinery." To speed up the commissioning of the refinery, IOC then allowed contractors to look for labourers from other parts of the country and brought in new contractors for assignments where progress was not satisfactory. 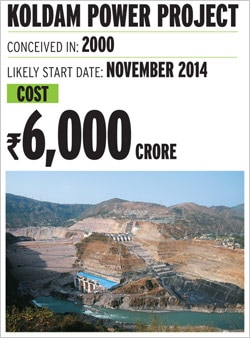 KOLDAM HYDROPOWER PLANT
Eleven years ago, state-run utility NTPC began work on its first hydroelectric plant as part of its efforts to diversify beyond coal- and gas-fired power stations. The 800-megawatt Koldam project on the river Satluj in Himachal Pradesh encountered several environmental and geological hurdles that led to time and cost overruns. "We could not gauge the strength of the hills. The entire project had to be redesigned," says an NTPC executive, who does not want to be named.

The project is now in the last stages of completion. NTPC will start filling the reservoir to the requisite level of 652 meters after the monsoons. The company tried filling the reservoir last December but encountered problems because of leakages in some areas. "We hope that things will go as per our plan and the commissioning of the first unit [of 200 MW] will happen before the onset of winter this year," says Arup Roy Choudhury, Chairman and Managing Director of NTPC. The project will annually generate 3,054 gigawatt-hours of electricity and will provide much-needed peaking capacity to the northern grid. The plant is important also because it will contain the high silt level in the river before waters enter the downstream Bhakra dam. 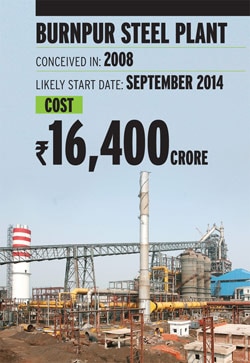 BURNPUR STEEL PLANT
State-run Steel Authority of India Ltd (SAIL) is giving finishing touches to the modernisation-cum-expansion project at its Burnpur steel plant in West Bengal that was originally set up in 1918. The company is spending more than Rs 16,400 crore to replace the obsolete technology used in the plant and expand the capacity five times to 2.5 million tonnes a year. "We are expecting the commissioning to happen in September," says a steel ministry official.

SAIL is also likely to complete expansion work at its Bhilai, Bokaro and Rourkela plants over the next few months. These projects will increase its annual steelmaking capacity to 23 million tonnes from 14 million tonnes, says a SAIL executive. The ministry official says the expanded capacity will help reduce India's steel imports.

Strategic Crude-Oil Storage
Come September, India will have its first underground crude-oil storage in the southern port city of Visakhapatnam. The project, started in 2003, is being undertaken by state-run Indian Petroleum Strategic Reserves Ltd (ISPRL) and will help India deal with any disruptions in crude oil supplies. But, it is running behind schedule. "In 2011, when we were at the last stage of drilling, we met with a geological surprise as we hit a brittle rock that slipped," says Rajan Pillai, CEO of ISPRL. "This delayed the commissioning by roughly two years." The project comprises a 7.5-km-long tunnel with several caverns to store 1.33 million tonnes, or 9.75 million barrels, of crude oil. "We are trying to balance the level of gases, especially oxygen, in these tunnels before we could start filling crude oil," says Pillai. "If the commissioning tests happen as per plan, we would be ready to receive the first shipment of crude oil from November."

ISPRL is working on two other storage tanks - at Mangalore and Pudur in Karnataka. The total cost of the three units has jumped 65 per cent from the original estimates to $635 million (about Rs 3,800 crore), according to the petroleum ministry. Depending upon oil prices, an investment of $2 billion to $4 billion is needed to fill these storages, says Narendra Taneja, national convener of the Bharatiya Janata Party's energy cell. The UPA government has not made any decision on this investment and the new government will have to take a call on this, he adds.

...AND THE OTHERS
Two major projects - a petrochemical complex and an oil pipeline - will start functioning in Gujarat in coming months. ONGC Petroadditions Ltd, a joint venture of Oil & Natural Gas Corporation, GAIL India and Gujarat State Petroleum Corporation, is spending Rs 21,396 crore to set up a petrochemical complex at Dahej. Construction work on the 1.1-million-tonne complex is almost complete and commissioning tests will begin in June. "If not all, then some parts of the complex will start working in next two months, and we expect the entire capacity will be up and running by November," says a senior company executive.

Private-sector explorer Cairn India is set to complete a pipeline that will transport crude oil from its Rajasthan fields to Bhogat port in Gujarat. The completion of the last 10-km stretch to Bhogat will put Cairn in a better position to sell its crude. Currently, it sells crude to Reliance Industries, Essar Oil and Indian Oil through a 590-km pipeline from Rajasthan to Gujarat. The completion of the last stretch will help it reach out to other coastal refineries in the country. The pipeline will be completed by October, says a Cairn spokesperson, adding that the cost of the entire pipeline and the port is $1 billion (about Rs 6,000 crore).

While these projects will provide a leg-up to the infrastructure sector in the short term, many more that are set to take off will help revive the economy in long run. Since June last year, a special cell set up in the Cabinet Secretariat by Prime Minister Manmohan Singh has fast-tracked approvals for stalled projects in sectors including roads, power and railways with total investment of Rs 3.2 lakh crore. Clearly, the future appears better. "Things are shaping up well on the ground," says Vinayak Chatterjee, Chairman of infrastructure consulting firm Feedback Ventures. "In next six months things might look much brighter."

What does domestic production of olive oil mean for India?