Truck market's distant No.2, Ashok Leyland is aiming for a larger share not just in India but also abroad. Problem: there are newer global rivals and tougher market conditions to negotiate. R. Seshasayee, MD, says that speed is the essence and all employees have been made to realise its importance. N.Madhavan reports.

60 and on the go”, proclaim dark blue posters adorning the walls of Ashok Leyland’s executive offices on the fourth floor of Standard Chartered building in Parry’s Corner, one of the oldest business boroughs in Chennai. On September 7, 2008, the company that started life as Ashok Motors and as a manufacturer of Austin cars will turn 60 years old. In an era where few companies survive to be 60—at least without getting acquired by or merged with a bigger player—the milestone is worthy of celebration. ALL’s Seshasayee: He has been driving home to all employees the importance of speed
However, a more accurate boast would have been “60 and Finally On the Go”. After all, Ashok Leyland, which got the Leyland suffix after British Leyland picked up a stake in it in 1955 and turned it into a commercial vehicle (CV) manufacturer, has so far been happy being a distant No. 2 in the CV market to Tata Motors. Evidently, that’s about to change.

“In the overall group mission for 2010, we see ALL (Ashok Leyland Ltd) growing to become a truly global company, easily among the 10 largest commercial vehicle manufacturers in the world,’’ says Dheeraj G. Hinduja, co-Chairman of the company.

Wishful thinking? Maybe not, if ALL’s current actions are any indication. It is investing about Rs 3,600 crore in capacity addition over a three-year period—that’s more than what it has cumulatively invested over the last 60 years! It has also entered into a joint venture with Nissan for a Rs 2,300-crore project that will produce light commercial vehicles both for India (and thus plug a gaping hole in the company’s product portfolio) and markets abroad. It has pumped in Rs 600 crore over the last five years to beef up its research and development to develop globally competitive products.

Click here to Enlarge
More importantly, says R. Seshasayee, Managing Director and the man behind this transformation, “we had to address a mindset issue as well. In today’s world speed is everything. We instantly remember Jamaican Usain Bolt as the winner of 100 metres at the Beijing Olympics. Does any one remember the marathon winner? Every employee has been made to realise the importance of speed.’’

But ALL's future has never been this challenging. The CV market is getting crowded. World’s leading truck makers such as Daimler AG, Man AG and Scania are entering India. And Volvo is expanding its decade-old presence in India through a joint venture with Eicher Motors. “India is a fast-growing economy looking for an efficient way to move its people. We think we have the necessary solutions and our JV with Eicher will be mutually beneficial,’’ says Marten Wikfross, Head of Media Relations, Volvo Group.

Even as competition is set to increase, demand—after years of strong growth—is showing signs of slowing down. “Commercial vehicle industry is sentiment driven. Uncertainty in the economy and poor availability of finance have affected growth,” rues Seshasayee.

Also, there is a clear shift in demand away from medium commercial vehicles (which account for a good chunk of ALL’s volumes) to light commercial vehicles (where ALL is practically absent) and heavy trucks. That apart, the company is being tested to its limits by the sharp rise in input costs; steel prices alone have risen by more than 50 per cent since February this year. Unable to bid for certain state transport undertaking tenders that were unviable at current costs, ALL’s market share in the bus segment had dropped from 51 per cent to 49 per cent in July.

Click here to Enlarge
Retaining talent will be another challenge for ALL, as it is a fertile poaching ground for MNC rivals and some of them, like Daimler, are setting up shop at ALL’s backyard. The Hero-Daimler JV, for example, is coming up at Oragadam, near Chennai. “With India being the only market to post robust growth, it will be naive not to expect the MNCs to come. We have prepared ourselves by benchmarking our practices to the best in key areas,’’ explains Seshasayee.

Although ALL is known for its quality products, its bugbear was delays in product launches. For 12 months now, it has been working on fixing that as well. An all-new process of product development, dubbed GENMOD for generation modern, works on the principles of concurrent development and modularity and involves as many as 13 departments from Day One of product development, explains R.R.G. Menon, Executive Director, Product Development, ALL. “This way we cut as much as half of the development time as the product does not go back and forth for rectifications/improvements,’’ he explains. The “Unitruck” platform, unveiled recently, was developed in 14 months employing GENMOD as against 24 months it took earlier to develop the platform for semi-low-floor buses.

ALL claims that it can now launch a variant in just 15 days as against the nine months it took earlier. “Agility is going to play a key role in the market because, for us, offering value to the customer is a key differentiator,’’ adds Menon. ALL’s revamped Ennore plant: Capacity expansion factors in ALL’s global ambition
Eager to move away from the world of borrowed technology, ALL over the last five years invested more than Rs 600 crore to set up a full-fledged R&D centre that now employs 600 engineers. The head count and its annual R&D spend (currently Rs 202.30 crore, or 2.6 per cent of revenues) will double in another two years. The “Unitruck” platform, Neptune engine (in collaboration with AVL Austria) and a new generation cab are fruits of this investment and conform to international standards, says Menon. “Also, it is ALL’s new 1.5-litre engine that will power the LCVs manufactured by the ALL-Nissan JV,’’ points out Seshasayee.

To gain economies of scale, ALL is enhancing its capacity from 84,000 units to 1,84,000 units by setting up two 50,000-unit facilities, one in Uttarakhand and the other in Tamil Nadu. The Uttarakhand facility will help the company penetrate the northern markets more aggressively and bring about significant savings due to its proximity to the market. Separately, ALL is also modernising its Ennore plant, which produces gear boxes and engines.

“The capacity expansion factors in large-scale exports as the ‘Unitruck’ range reflects our global ambition,’’ explains Seshasayee. How is ALL funding this expansion? “Through a mix of internal accrual and debt,’’ explains K. Sridharan, CFO.

Unlike Tata Motors, which has economies of scale and a steel supplier in group company Tata Steel, ALL has had to counter rising input costs through value engineering, e-sourcing to reduce procurement costs, global sourcing and longterm contracts, explains Vinod K. Dasari, COO. The company has also had to pass on the price increase to its customers faster (6.5 per cent increase over the last six months) than competition. That’s despite attacking wastage aggressively. “We initiated Mission Gemba (it means workplace in Japanese) in July 2005 and initially identified 64 Gembas.

With active employee participation, limitations of each of these units were mapped and improvements identified. In four months, capacity/productivity and quality were higher by 40 per cent and costs lower by a similar value,’’ explains Dasari.

As 80 per cent of ALL’s inputs are bought out, it has now taken this initiative to its suppliers. “In March 2005, our turnover was $1 billion. But for these measures it would not have reached $2 billion in March 2007 without significant increase in manpower or investment,’’ adds Dasari. It is these efforts that enabled ALL to improve its operating margins by 80 basis points in 2007-08 despite strong increase in input costs, says Sridharan. 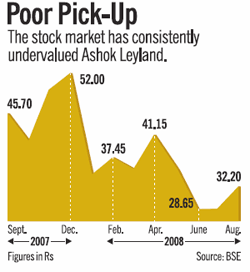 ALL has also simultaneously strengthened its management bandwidth with specific focus on people who have global experience. It has appointed V. Sumantran, a former General Motors and Tata Motors executive, as executive Vice Chairman of Hinduja Automotive, the holding company of ALL, and has at least 10 people who have worked in Detroit.

Meanwhile, the company’s non-auto business is gaining momentum, too. In its engines’ group, it is positioning itself more as a solutions provider than as a manufacturer. “Initially we were selling just the engines, which were getting packaged and sold as generator sets. We then thought of doing that ourselves and launched Leypower gensets,” says Dasari. Now, the company is considering offering power solutions rather than just gensets. “We may extend this concept to trucks as well,’’ adds Dasari.

While ALL’s belated decision to transform itself is in the right direction, the timing of it may prove tricky. A slowdown in demand, rising input costs, and formidable competition from newer global rivals may hurt ALL’s profitability in the near term. But Seshasayee is unfazed. He firmly believes that the latent growth is intact and demand will recover. How right he is will determine the quantum of pain ALL has to bear as it matures into a globally competitive player.