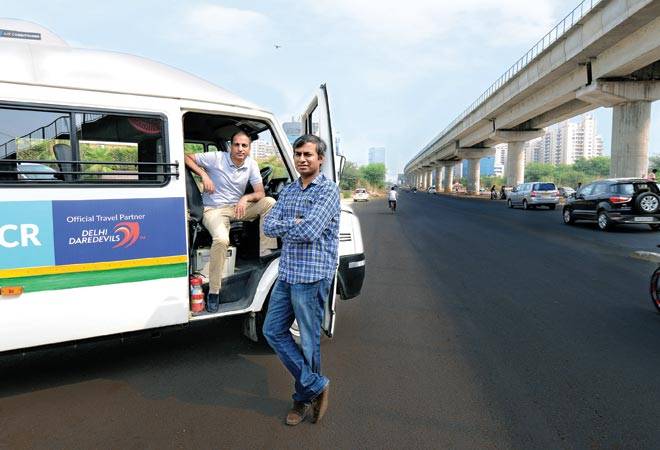 It wasn't a smooth ride for Amit Singh and Deepanshu Malviya, former colleagues at Jabong, when they launched a vernacular micro news app called Vande, followed by an impersonation app Zorry (a play on 'sorry'). The engineers from IIT Delhi and IIT Kanpur, respectively, realised "we were not creative people but loved solving engineering problems and decided to stick to what we were programmed for". Having gathered substantial experience in the transportation business in the first 10 years of his career, Singh deemed it fit to explore the transport domain. While scouting for the start-up idea, it became apparent to them that companies were trying to solve the inter-city travel issue using ride-sharing in private cars.

"My understanding was that India isn't as evolved a market where a passenger would feel safe in a stranger's personal vehicle. That same person would be perfectly fine sitting next to a stranger in a public vehicle, like a bus, though," Singh observes.

On January 14, 2015, to test their hypothesis, the duo started a pilot project to provide inter-city buses. The rationale was to use mini buses so they could go deeper into the city and pick people from closer to their homes, and employ trained drivers - a concept, Singh claims, largely missing in inter-city travel.

However, in the next three months, they inferred that small buses were not comfortable for long distance travel. Besides, since people travel to nearby cities only once or twice a month, the incentive of being picked up closer to home was insignificant. They pivoted the company to provide bus services within Delhi. Malviya built a "very plain-looking app" in a day, for users to book the bus service.

The next day, April 8, their two colleagues stood at Huda City Centre in Gurgaon urging people to use the app and ride in an Innova to their office for just Rs 20. "We were thrilled when two people got interested and boarded the car. In the evening, these two people booked again and got five more guys with them. We got referral and retention from paying customers, all on day one," says Singh, ecstatic. Shuttl did 17 rides on day two and clocked 100 rides on the tenth day.

The co-founders put in Rs 15 lakh initially, followed by another Rs 15 lakh after two months. In May 2015, they raised Series-A funding of $3 million after four meetings with Sequoia. A few angels including Rajul Garg, Co-founder, GlobalLogic and Sunstone Business School, and Sachin Bhatia, Co-founder of TrulyMadly also participated in the round. In December 2015, they raised $20 million in a Series-B round from Lightspeed Venture Partners, Times Internet and Sequoia Capital.

According to Singh, 15 million rides happen in Delhi-NCR on buses, metros and private vehicles every day, out of which five million happen only on buses. "We are trying to provide a comfortable ride for the big chunk that doesn't want to travel in DTC buses and can't afford to take a cab every day. Using private vehicles is inefficient. For every one person, three seats get wasted in a car," he says. The company charges Rs 2-4 per km.

Any business comes with its set of challenges. For a bus aggregator platform, streamlining execution is a major one. "The driver has to reach the location at the right time every day - not a minute early or late," Malviya states. Communicating the exact pick-up and drop location to users can be difficult too; often these can be in the middle of a road, next to a tree. Shuttl solved this problem through its location-based app. 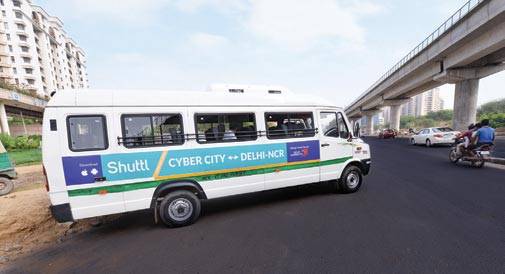 Given its focus on being an asset-light company, the co-founders were clear they would not own any buses. Shuttl rents buses from several small bus operators on a full time or shift basis for a fixed amount. The average monthly rent for each bus that works exclusively for them is around Rs 75,000, which includes the driver's salary, fuel and insurance. From the 500 buses, 70 per cent are used on a full-time basis.

To have control over users' commuting experience, Shuttl only gets drivers who can read or write basic English or Hindi so that they follow directions on the app. Drivers are put through third-party verification, route training, followed by behavioural training. Feedback from passengers is tracked closely. It recently launched a 'home-check' feature wherein passengers are called to check if they have reached home safely from the drop-off location. If not, the team alerts the passenger's emergency contact or the police.

Singh hopes to adopt a revenue sharing model with bus operators, going forward, where Shuttl will take a 10-15 per cent cut per person on every ride. As of now, the duo is focusing on increasing the number of routes per bus, frequency and the profitability of each route.

Currently, the company operates its shuttle service on 100+ routes in Delhi-NCR, mostly in Faridabad, Gurgaon and Noida. Commuters can ride by paying daily or avail a weekly, monthly or a quarterly bus pass. Currently, it has around 20,000 daily passengers, who pay an average of Rs 70-80 per ride.

Two Shuttl users this writer spoke to prefer its services over Ola Shuttle. However, both pointed out that Shuttl charges Rs 20-30 more per ride than the competitor. J.R. Nayak, who takes Shuttl from Dwarka to Golf Course Road in Gurgaon, says, "They have timely pick-up and drop. Also, they don't stop at too many places ensuring we reach our destination on time. That is not the case with Ola Shuttle."

Shuttl has started a 'Make your Own Route' campaign on its website and mobile app wherein people can feed in information on the route they travel on every day. If the route has more than 10 takers, Shuttl promises to start the service on that particular route. In a bid to learn about frequently travelled routes, Shuttl, in February 2016, during the Surajkund International Crafts Mela in Delhi, launched a free mini bus service to ferry people from nearby metro stations to the venue. Almost 6,000 people availed the service and the Gurgaon-based bus aggregator start-up was able to start four new routes in the next few weeks.

In August last year, it entered the B2B segment by tying up with companies as their travel partners. Gurgaon-based software development firm Nagarro was its first client. Shuttl ferries 500 of its employees daily on 22 routes, and provides pick-up and drop services from metro stations. Currently, 15 companies use Shuttl's services, including hotel aggregator company OYO.

Malviya was unwilling to divulge revenue numbers. "We are not looking to grow ten-fold, but focusing on providing the right experience so that the current set of commuters uses us more often. We are hardly a year-old company; it is too early to share the burn rate or revenue figures," he says.

In Delhi, Shuttl competes with Ola, which launched its shuttle services in Delhi in September 2015. It has competitors outside Delhi in ZipGo, which has presence in Bangalore and Delhi, and CityFlo, which operates in Mumbai and has raised Rs 4.9 crore in seed funding from IDG and an undisclosed investor, in November 2015. Internationally, too, the bus aggregator platform business is at a nascent stage. In China, Didi Kuaidi launched Didi Bus services last year and start-up DuduBus, too, started offering bus services for office commute. In the US, start-ups Chariot and Bridj operate in this space.

If not Rajan, his policies must go on