SKS Microfinance's failure to win a small finance bank licence, even as its competitors got them, is likely to hit its growth prospects hard.
By Mahesh Nayak | Print Edition: May 8, 2016 Just as it seemed SKS Microfinance was getting back on its feet, it has received a body blow once again. It had applied for a small finance bank (SFB) licence, but while eight of the 10 entities the Reserve Bank of India (RBI) awarded these licences to were microfinance institutions (MFIs), SKS Microfinance was not one of them (See Left Out). Indeed, of the 10 leading MFIs in the country, one, Bandhan, has become a full-fledged bank, while another eight will shortly be converted into SFBs. SKS Microfinance is the only one left out.

Why did this happen? "The company didn't get fit and proper clearance from the concerned agencies," says an RBI official on condition of anonymity. SKS Microfinance failed to get a clearance because its President, S. Dilli Raj, who was also said to be a director at the Chennai-based First Leasing Co, faces a Central Bureau of Investigation (CBI) probe. Last October, cases were registered against the then Chairman A. C. Muthiah and three directors, including Dilli Raj, for allegedly cheating IDBI Bank of Rs 274 crore. "My name has been unnecessarily dragged into a controversy in which I had absolutely no role," said Dilli Raj in an official statement released by the company. "I will take all steps in accordance with the law to defend myself and set the record straight."

But the danger was never in the short term. It is in the medium to long one. For the first 18 to 24 months, it is the other MFIs that have won SFB licences that will have to incur additional expenditure on setting up branches, improving technology and establishing their brands, which could impact their margins. (Some of these MFIs, though, already have a fair number of branches.) As time passes, however, their advantage over SKS Microfinance will become increasingly manifest. "The SFB model may or may not be successful," says Parag Jariwala, Vice President - Institutional Research at Religare Capital Markets. "But it will certainly cause a disruption in the MFI sector, which will impact SKS Microfinance." 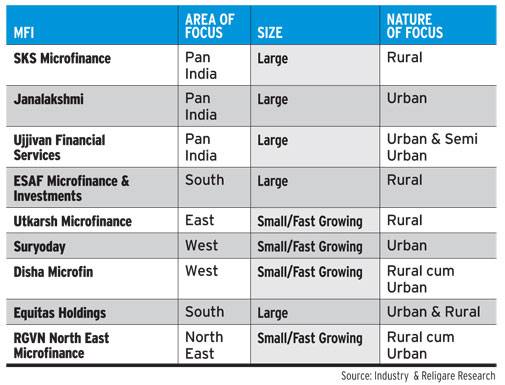 LEFT OUT: While SKS Microfinance has been ignored by the RBI, the 10 small finance banks (SFBs) announced so far include eight of its peers. The other two in the list are AU Financiers (Jaipur) and Capital Local Area Bank (Jalandhar) 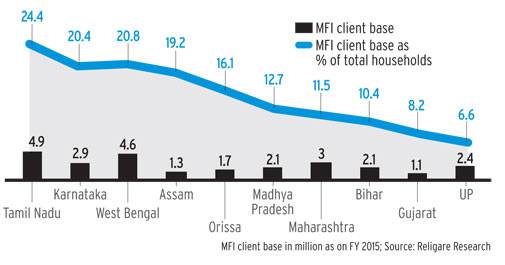 SATURATION POINT: Microfinance has already penetrated beyond 15 per cent of households in Southern and Eastern India. The market in these states is unlikely to expand much further

This is because SFBs, like full-fledged banks, will be allowed to accept retail deposits, which MFIs are not. Establishing them is part of the RBI's effort to extend banking and credit facilities to areas and sections overlooked by the big banks. MFIs, in contrast, have to borrow from banks to provide loans, and thus mostly charge interest at over 20 per cent from their customers. SFBs will be able to use their deposits to do so and will thus lend at a substantially cheaper rate. (SFBs will differ from full-fledged banks in that their paid-up capital needs to be a minimum of just Rs 100 crore, apart from other concessions.) But SFBs, unlike big banks, will operate on the same turf that MFIs do - RBI rules stipulate, for instance, that 50 per cent of an SFB's loan portfolio should comprise small loans of less than Rs 25 lakh.

Earlier, SKS Microfinance's cost of borrowing used to be 2 per cent less than other MFIs. But soon it may be the other way round. "While it will vary from bank to bank, the average cost of borrowing for an MFI-turned- SFB should be 3-3.5 per cent lower than its current rate," says P.N. Vasudevan, Managing Director, Equitas Holdings, one of the eight MFIs to have got an SFB licence. Equitas's present borrowing rate is 12-12.5 per cent. "The credit rating of MFIs that have got SFB licences will also improve, enabling them to access loans more cheaply," says Parijat Garg, Vice President, CRIF High Mark, a credit information company. They will also be able to provide a greater variety of products than MFIs - retail loans, corporate loans, SME loans and even personal loans against property.

SKS Microfinance did not respond to queries from Business Today about its growth prospects.

SKS Microfinance, originating from the non-profit Swayam Krishi Sangam (SKS), was started in 2005 by the flamboyant Vikram Akula and soon became the poster boy of the MFI sector. It drew an unprecedented amount of private equity from the likes of Sequoia Capital and Chairman Emeritus, Infosys, N.R. Narayana Murthy. In August-2010, it also became the first MFI in the country to issue an IPO, which again was wildly successful, being oversubscribed 14 times. (Only one other MFI has been able to go public since then - Equitas Holdings, in March this year.) But the good times ended abruptly in October the same year with the passing of the Andhra Pradesh Microfinance Institutions (Regulation of Money Lending) Ordinance, which became an Act two months later. 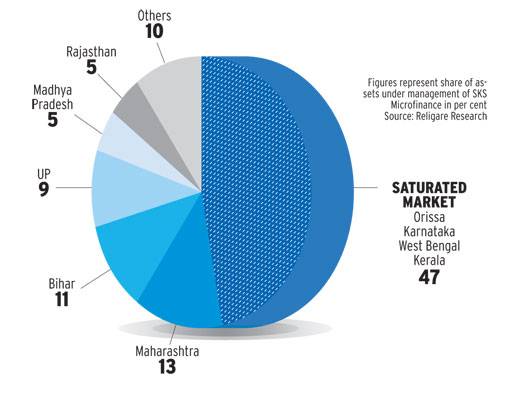 BUSINESS SPREAD: Close to half of SKS Microfinance's loan portfolio is in the South and East where microfinance is already close to being saturated

Andhra Pradesh was then the nerve centre of the microfinance business, with most of the leading MFIs - including SKS Microfinance - headquartered in Hyderabad, and having the bulk of their business within the state. But following complaints of usurious rates and coercive recovery methods by some MFIs, the state government brought in this stringent law, closely regulating every aspect of the business. Borrowers, however, interpreted it as a signal that they need not repay their loans at all, while, as a ripple effect, banks across the country became extremely wary of lending to MFIs. According to the paper Andhra Pradesh Microfinance Crisis and its Repercussions on Microfinancing Activities in India by Delhi University researchers Prabhjot Kaur and Soma Dey, the loan recovery rate plummeted from 99 per cent to 10 per cent, while the growth in loan portfolio fell from 95 per cent in 2009/10 to 17 per cent in 2010/11. 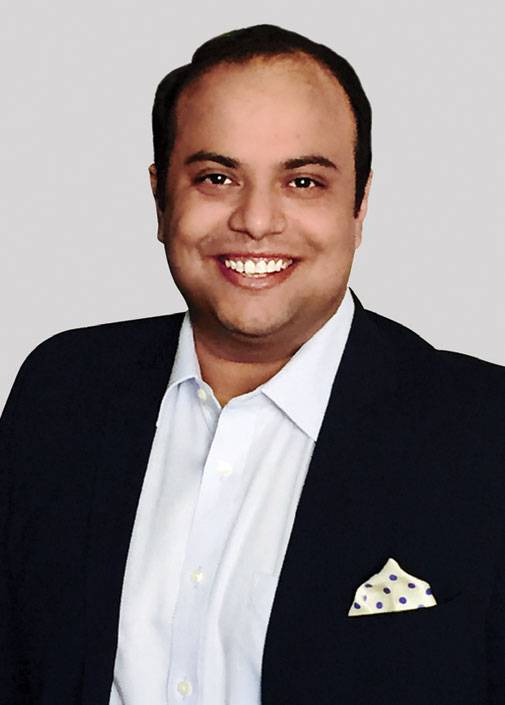 "Unless MFIs like SKS Microfinance come up with products that are differentiated as well as well suited to the region where they are offered, it will be difficult for them to capture market share"

Microfinance collapsed in Andhra Pradesh and has since never recovered. All the leading MFIs in the state have closed. In the rest of the country, however, there has been a gradual MFI resurgence, exemplified by the success of Bandhan, which had 501 branches when the RBI permitted it to turn into a bank last August. (In the next two months it mopped up Rs 1,500 crore in deposits, 26 per cent of which were current account or saving account (CASA) deposits.) At SKS, mutual recrimination following the crisis saw the ouster of Akula himself in November 2011, but the company - thanks to a steady pick up in loans and increasing non-loan income - was gradually making a comeback. This was mainly because of the money they had in hand, raised through the IPO. This was the biggest advantage for SKS, compared to its peers in Andhra Pradesh who have struggled to make a comeback due to lack of funds.

The failure to get an SFB licence will also matter because the microfinance sector, many analysts feel, is reaching saturation point in several states, especially Tamil Nadu, Karnataka, Assam, West Bengal and Orissa (while Andhra Pradesh and Telangana are beyond repair). They believe that growth in the number of new customers will not be more than 10 per cent year-on-year. "There is still scope of expanding loan books by giving bigger loans," says Kuntal Sur, Partner (Advisory - Financial Risk Management), KPMG. "On average, MFIs have given loans of only Rs 40,000-50,000 so far." Many are already doing so, including SKS Microfinance, whose average loan size, once truly tiny, reached Rs 14,857 in December 2015. Larger loans per borrower also helped bring down SKS Microfinance's average cost to assets under management (AUM) from 10.6 per cent in December 2014 to 6.8 per cent a year later. But here, too, there are constraints, as regulations in most states limit MFI loan size to less than Rs 1 lakh.

Again, not all MFI customers necessarily want bigger loans. Some need as little as Rs 5,000 to buy from the wholesale market and sell in retail, and would prefer not to over-leverage themselves. If the SFBs reach out to this section, MFIs are in further trouble. "The biggest impact of competition from SFBs will be on margins," says Religare's Jariwala. "Microfinance is not going to grow at 40-50 per cent as it once did."

There is another way to keep up the growth rate - by taking bigger risks. "MFIs will have to change their business strategies to grow," says Garg of CRIF. "For one, SKS should look at product differentiation. For another, it could take higher risk on its balance sheet. It could look at customers with lower creditworthiness as well as increase the ticket size per customer." But the downside of such an approach is obvious. "The borrower should have the ability to repay," says Jariwala. Unsecured or partially secured credit can play havoc with an MFI's finances if a crisis erupts, such as, for instance, the 2009 silk industry crisis in Kolar district of Karnataka, when, following reduced demand due to the global financial downturn and over-indebtedness of weavers, local mosques issued directives to cease all transactions with MFIs. Almost the entire district defaulted. "Small finance banks may or may not be successful, but they will cause disruption in the entire MFI sector and will certainly impact SKS Microfinance"

Currently, regulations allow customers to borrow from two MFIs at the same time, but once SFBs enter the fray and seek similar customers, some may borrow beyond their means, resulting in slippages, especially if loan sizes also increase. There is already a rural slowdown, which, if it exacerbates, can badly singe those who took risks. "In case of default, 10 to 15 per cent of the loan book will go for a toss," says a senior government official on condition of anonymity. "With unsecured credit, the recovery rate can be zero."

With the southern and eastern markets close to saturation, many MFIs, including SKS Microfinance, have been trying to increase their footprint in the North and the West. SKS Microfinance, for instance, has been increasing the number of its business development officers - called 'Sangam managers' by the company - by 20-25 per cent a year, hoping to grow its AUM around 50 per cent annually even as costs rise 30 per cent due to the new hires. (Its current AUM is around Rs 6,200 crore.) "But unless MFIs have products which are differentiated, as well as well adapted to the regions where they are being offered, it will be difficult for them to capture market share," says Vinayak Burman, Founder-Partner of corporate law firm Vertices Partners.

SKS Microfinance's demise is unlikely, but its challenges have certainly multiplied.