Slashing on the street

For most finance professionals, the days of dizzying salary hikes and fat bonuses are over. In fact, many have been retrenched. The downturn in markets—India and global—has forced a number of hitherto gung-ho financial services firms to wield the job axe. Rachna Monga reports.

Not too long ago, finance professionals like Patil, Kumar and Shanbhag were being desperately sought out by headhunting firms, brokerage houses and investment banks. Salaries rose manifold and even a back-office operations guy could command a sign-on bonus. With a secular bull run in place, financial services firms least expected the growth momentum to lose steam.

Most expanded operations beyond broking, brought in an army of relationship managers and analysts, and doled out hefty bonuses year after year. The global hedge funds joined the party in India, and lured many domestic fund managers (like Shanbhag) into their fold. The going was good. Until January, when brokerages and investment banks were caught off-guard by the sudden turnaround in investor sentiment.

Hit by a sharp drop in trading volumes, a lack of initial public offerings (IPOs) or new funds to sell, and a relative slowdown in mergers & acquisition (M&A) activity, a number of these firms realised they couldn’t keep the gung-ho growth momentum going. Result? Sign-on bonuses, and huge salary hikes have made way for performance-linked appraisals. And the inevitable retrenchments.

Avers Puneet Pratap Singh, Partner at Delhi-based Executive Access India, a firm that recruits middle- and senior-level executives: “Involuntary resignations among middle-level executives in the broking and wealth management space are on the rise.” 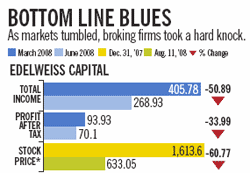 Click here to Enlarge
“When there was a need for five people, broking firms hired 20. Now as business has come down, employees are being sacked at the drop of a hat,” says Amit Sharma, CEO at Delhi-based Accord Consultants, who recruits finance professionals across levels. The attrition in the sector has gone up by 3-4 times. In some firms, performance targets have been made stiffer, which forces employees to quit on their own; or they are being thrown out for trivial reasons such as asking for leave or reaching late in office, Sharma adds. At the time of writing this story, a large brokerage house in Mumbai had started doing a daily performance appraisal of its employees.

Motilal Oswal Securities, the fourth-largest broking firm by market capitalisation, handed pink slips to 100 employees after its annual appraisal in June, which constitutes 5 per cent of its 2,000-odd workforce. Motilal Oswal, Chairman & Managing Director, defends retrenchment as a strategy to deal with non-performers. He adds that rationalisation of manpower is a continuous process. “And we have hired about 50 persons in June and July,” says Oswal.More than sheer numbers, however, it’s the frantic movement taking place at the top levels that’s a worry for firms like Motilal. For instance, it lost two senior executives to rival firms over the past few months. Vetri Subramaniam, who joined the group in February to spearhead the Asset Management Operations, quit in June to join in a similar position at Religare Aegon.

Hitungshu Debnath, who headed the Wealth Management Operations, left in June to join unlisted retail broking firm, Angel Broking India. It wasn’t always that way. Till 2007, heads of Research and Sales for Institutional Equities were commanding an annual fixed compensation that ranged between Rs 75 lakh and Rs 1 crore. The salary hikes at this level have come down from 30-35 per cent to 15-20 per cent. A Relationship Manager who deals with retail clients could command Rs 20 lakh as annual fixed compensation and half of that as a variable portion. The variable component has now come down to 20 per cent.

The correlation between falling markets and dropping salaries and job losses is straight forward. Consider: The average trading volumes on the National Stock Exchange (NSE) have dropped by a fourth since December, and IPO mobilisation has almost halved from Rs 35,000 crore in the first six months of 2007 to Rs 16,500 crore in the corresponding period of 2008.

Is it all gloom and doom?

It’s a worrying situation, although human resource consultants don’t think it is as desperate as the slump of 2000. “It’s not a gloom and doom kind of a situation for the finance professionals yet, but there is a strong headwind towards it. Finance firms anticipated a certain growth momentum and had drawn out expansion plans accordingly.

With the fundamental situation undergoing a change, their plans have gone for a toss,” says E. Balaji, CEO, Ma Foi Management Consultants, a search firm that recruits middleand senior-level professionals. The global firms, for their part, are rather curiously placed. Even as the scars of the subprime credit crisis in the US a year ago show little signs of disappearing, they have to take a call: Should they cut losses by rationalising across the globe; or should they choose to step on the gas in developing markets like India? The buzz on the street is that one Wall Street bank has sounded off its employees in the capital market team that if market conditions do not improve by December, they would need to start looking out for jobs.

Yet, there are a few who see an opportunity to grow amidst such market conditions. Last fortnight, Macquarie Capital Securities India announced six senior-level appointments in Equity Sales, Corporate Finance and Operation. “We are using the downturn to hire more people and make sizeable investment in human resources in India,” says Stuart Smythe, Senior MD and Head of Equity, India. Credit Suisse Group also announced three senior-level appointments for its Investment Banking Operations in India.

Interestingly, banks like Macquarie aren’t the only ones who’ve sniffed the domestic opportunity. A clutch of professionals, who’ve been scalded by the subprime mess, is opting to return to the safer and higher-growth haven of India.

Harsh Nahar, a 30-year-old Chartered Accountant, Chartered Financial Analyst and Management graduate from University of Michigan, was set to start his Wall Street career by joining Bear Stearns, where he interned during his MBA. The collapse of the bank under the weight of subprime losses prompted Nahar to pursue his long-cherished dream of being an entrepreneur, albeit much earlier than he had planned. Nahar, along with his wife, plans to come back to India and give shape to his dream of being an independent Investment Manager. He plans to set up an investment firm, Mili Capital Management, in Mumbai.

The allure of hedge funds, too, has faded considerably. K.C. Reddy, a 37-year-old Investment Manager at Charlemagne Capital in the UK, is back in the country after 12 years (in Hong Kong and the UK). Reddy, who managed a long-only and a long-short fund at Charlemagne, came back in June to head the Investment Management Operations at ABN AMRO Asset Management (India). “My belief is that the global and emerging economies will continue to face a prolonged slowdown and there will not be much scope to generate superior returns. However, India may continue to do well and that’s why I decided to move back,” he points out.

It’s such optimism that’s keeping the fires burning at the homegrown firms, and gives them the confidence that they can ride out the current rough patch. Oswal says growth plans are on track and the firm awaits regulatory approvals for its mutual fund operations.

Rashesh Shah, Chairman, Edelweiss Capital, says he has added 100 people over the last quarter and plans to add another 150 this quarter. “The idea is to use this consolidation phase to invest in newer businesses— debt, credit, asset management and retail financial products.”

Adds Lalit Thakkar, Director, Angel Broking: “We continue to hire and grow our branch network and gain substantial geographical presence.” That may be true, but for most finance professionals, the days of dizzying salary hikes and fat bonuses are unlikely to return in a hurry.