For more than a decade, Vijay Govindarajan has influenced thinking at Fortune 500 companies and top B-schools with his ideas on strategy and innovation.

For more than a decade, Vijay Govindarajan has influenced thinking at Fortune 500 companies and top B-schools with his ideas on strategy and innovation. He has once again set the business world agog with his concept of reverse innovation— which requires multinationals to develop products in emerging markets like China, India and Brazil and then distribute them globally. Put forth in a recent HBR article titled How GE is Disrupting Itself (co-authored with Jeffrey R. Immelt, Chairman & CEO, General Electric, and Chris Trimble, Professor, Tuck School of Business), the idea is based on developments during his stint at General Electric, where he is on a two-year sabbatical from Tuck School as Professor-in-Residence and Chief Innovation Consultant. In a conversation with us, Govindarajan talked about reverse innovation, what it means for Indian companies in terms of opportunities and the need to drop their penchant for reverse engineering and instead look for innovative solutions for the various problems that besiege India. Excerpts:

According to you, the days of glocalisation are over and that reverse innovation is the key to success of MNCs...
Since the ’50s, multinational companies (MNCs) essentially have innovated in the US and distributed those products in Europe and Japan. This strategy, termed as glocalisation, helped MNCs minimise cost, thanks to scale, while maximising market share through local customisation. As Europe and Japan had a similar customer base, the MNCs could easily adapt to these markets. But not any longer. Over the last five years, the customer base has shifted to emerging markets like China and India, which are very different from the US. For instance, the per capita income in rural India is $200 compared to $50,000 in the US. You cannot create a product for the US market and adapt it to rural India. Instead, you have to fundamentally innovate to satisfy the needs of customers in China and India. You have to innovate in the emerging markets and then take those products to developed countries. This is what I call reverse innovation. 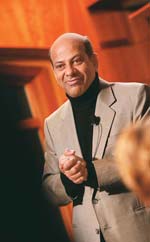 By that, you are turning existing innovation strategies on their head.
The rising per capita income in countries such as China, India and Brazil is the reason. The emerging middle class in these countries wants to buy products, but cannot afford to buy them if they are as expensive as in the US. The Tata Nano car, for instance, is meant to satisfy such needs. It is targeted at the two-wheeler population in India, which can afford to spend Rs 1 lakh on a car.

Today, India’s per capita income is similar to that of the US 100 years ago. But does that mean India will develop in the same way as the US did in the last 100 years? Absolutely not. That’s because India will develop over the next 100 years with technology that is available today. That is why you see cell phones everywhere in India and not many land lines. India will skip many of the technological stages that the US has passed through. Its trajectory of development will not be the same as the US. The MNCs will need to know that they cannot satisfy India’s needs by supplying yesterday’s technology.

Where in your opinion does India Inc. stand when it comes to innovation?
There have been isolated cases of breakthrough innovation in India. The Tata Nano, ITC e-Choupal, Amul Dairy, the telecom sector and the global delivery model of IT industry are some examples. But predominantly Indian companies have focussed on reverse engineering. That game is over. Indian companies grew by managing the efficiency gap (improving process efficiency from the control era days till the present) but the next frontier is managing the innovation gap. Over the next 25 years, Indian companies should dedicate themselves to innovation for finding solution to India’s present problems. If they do so, they will have a platform for launching a global strategy, as it is these solutions the world will need in the next 100 years.

In your view, by solving local problems, Indian companies will have a global launch pad…
I think Indian companies have a unique opportunity. To start with, they can innovate to find solutions to India’s problems. They are in a better position to do so as they understand India better than the MNCs. Not only are they located in India and have deep understanding of the consumers but also have the local resources to solve India’s problems with. Still, Indian companies are focussed on reverse engineering— producing western products cheaply for the local market. Copying rather than reverse innovation has been their approach.

For example?
Take the case of the energy sector. India has acute power shortage. In the US, electricity is typically generated in a central power plant and distributed through a sophisticated grid. With 60 per cent of India living in villages without reliable transmission lines, India’s energy infrastructure cannot be the same as the US, and any attempt to replicate that will cost trillions of dollars. Therefore, decentralised power generation and a renewable energy solution is most appropriate for India. In fact, the reason why the US is not moving to 100 per cent renewable energy is because its central power plants and transmission grids have residual life in them and it would not make economic sense to dump them. But years down the line when they come up for replacement, the US will surely opt for decentralised renewal energy. Indian companies that find and implement such a solution for India now will become global leaders in renewable energy then. This is reverse innovation at its best.

Same is the case with healthcare. In the US, 60 million people have no insurance, and the cost of healthcare has gone out of hand. There are problems of access. India with its poor population has a similar challenge. If India Inc. can innovate to find unique solutions for local problems, big global opportunity awaits them.

But innovating in a downturn could be a tough proposition?
I would say that the only way to come out of a downturn is through innovation. I have been studying downturns of the last 100 years and have come to the following conclusions: One, expansion always follows a recession. More importantly, expansion lasts much longer than a recession— actually three times more. Two, new winners and new losers emerge after a recession. For instance, after the dotcom debacle, 30 per cent of the companies in the US went bankrupt, 60 per cent managed to survive and 10 per cent became breakout performers. What did the 10 per cent do that others did not? They prepared and invested in innovation during the downturn instead of just focussing on the present—cutting costs. If you focus only on cutting costs, you only become part of the 60 per cent companies which survived. In the current recession, I expect big innovation in healthcare and alternate energy, and here again Indian companies have huge opportunities to become global players over the next 20 years.

Is it not risky to invest in innovation when cash flows are uncertain?
It is. During a downturn a company cannot afford to make big mistakes, as failure can be fatal. Indian companies over the next three or four years should focus on adjacency innovation. They should focus on breakthrough innovation after that—by when the economy would have revived further and adjacency innovation will bring in better cash flows. Remember we are looking at a 20-year horizon.

You have said that the world of business gets reset every 50 years. What are the broad contours of the world recently reset by the financial crisis?
Two important contours have emerged after the world was rest by the global financial meltdown. One, growth in the developed markets is slowing down and will continue to be slow for many years to come. In fact, growth will come from developing economies such as China, India and Brazil. Two, governments will begin to play an important role as partner, regulator, customer and investor. Companies should learn to partner with the government.

Are Indian companies doing enough to stay relevant?
In my view, companies have to tackle three important elements when it comes to strategy. I call this three-box framework. It essentially consists of Box 1—managing the present, Box 2—selectively abandoning the past, and Box 3—creating the future, which is innovation. Indian companies have excelled in Box 1, but the real challenge is in Box 2 and Box 3. They have a big innovation gap to address.

You recently called on CEOs to decouple from the financial markets if they come in the way of creating long-term wealth. Isn’t that a drastic step?
I had said that during recession when share volatility pushed down the value of the stocks irrespective of the fundamentals. I told the CEOs not to look at stock prices and instead invest in innovation and look at long-term value creation. Short-term maximisation of stockholders’ value has destroyed shareholders wealth in the long term and has led companies to make wrong decisions.

What have you learnt during your stint as Professor-in-Residence and Chief Innovation Consultant at GE?
It has been a phenomenal experience. Each opportunity like this is a Box 2 and Box 3 opportunity. I went to GE thinking that I was going to apply my research, but I realised that I did not know a lot. Real world is different. I came across the concept of reverse innovation only at GE. Today, I have so many ideas that I can write articles for the next 20 years. I went to GE as a teacher and am coming out as a student. I have been humbled.