A patient at the radiation centre at Apollo Hospital, Delhi Photo: Vivan Mehra

Oncologist Radheshyam Naik works at HealthCare Global (HCG), a Bangalore-based hospital chain that specialises in caring for patients with cancer, and sees about 150 cancer patients a month. About one-tenth of his patients have ailments for which drugs exist but are not available in India. Among them is a 45-year-old software professional who has a kind of bone marrow cancer. The patient, who does not want to be identified, may at best be able to pull along for another six to nine months on drugs currently available. The father of two school-going children, he is being treated with thalidomide. "He needs pomalidomide but it is not available in India," says Naik.

The new drug is life-extending, rather than life-saving, but even that can make a big difference. "This drug would make things better for him for at least the next two years, by which time there may be another drug available that could either extend his life further or offer a new solution," says Naik.

There are more than a dozen drugs in important cancer treatment areas that are not available in India. "The new drug flow into India has slowed down significantly and it is a matter of concern for oncologists and cancer patients," says oncologist B.S. Ajaikumar, Chairman and CEO of HCG.

The availability of new drugs varies by country. Kewal Handa, former managing director of Pfizer India, who now runs healthcare advisory Salus Lifecare, says: "The launch of these products depends on several factors, including market potential - the number of people who can afford them - and the time taken for approvals in the country." He says it takes anywhere from four months to two years for a new product to enter India.

Take pomalidomide, the drug that Naik's patient needs. A spokesperson for Celgene, the company that markets it as Pomalyst in the US, said in an email: "As with many of our therapies, we work toward approvals and availability in a country-by-country fashion and Pomalyst is still near the beginning of that process, having only received approval in the US and the European Union (where it is marketed as Imnovid)." A spokesperson at Bayer HealthCare said his company's regorafenib (which is sold under the brand name Stivarga and used to treat some types of colorectal cancer) says it is "currently not approved in India and hence not available in the market". The drug received US FDA approval in late 2012.

Limited health insurance penetration also means that most Indians pay out-of-pocket, and cannot afford expensive treatment. Naik's patient, for instance, currently spends Rs 15,000 a month on his therapy. If he were on pomalidomide, would he be able to afford Rs 1.5 lakh a month?

There are other reasons why multinational drug companies could find India underwhelming. "In the current scenario, even Indian companies have few incentives to undertake research and innovation, and even their own generic drugs have come under price control," says Kapil. "So there is little likelihood of this being seen as an environment encouraging big pharma to get newer drugs into India." The negative news about Ranbaxy and Wockhardt makes India less appealing, as does the wider context of revoked patents, drug price controls, and compulsory licences (patent holders granting licences to generic drug makers who sell the drug cheaply and pay royalties to the innovator company).

US giant Merck & Co, known as MSD outside North America, does not even list India among its top 10 priority markets (Brazil and China are on the list), which figure prominently in its recently announced global initiative to sharpen its commercial and R&D focus.

Many big pharma companies, including MSD, seem guarded in their responses and say they are committed to India, which is an important market for them. Ask MSD about bringing new drugs to India, one of its fastest growing markets, and a spokesperson says: "We stay committed to addressing disease burden in the country with a comprehensive ... approach of launching innovative ... medicines and vaccines, responsible and India-specific pricing, partnerships for disease management, capacity building and co-marketing for deeper geographic reach."

A spokesperson for Pfizer in India, while emphasising that India is an important market, says: "A lack of clarity and inconsistency in Indian regulatory requirements will lead to a shift of clinical trial placements to other countries with a developed, science-based and consistent regulatory framework. In the absence of clinical trials in India, it will become difficult to register new drugs leading to Indian patients being denied access to new innovative medicines." 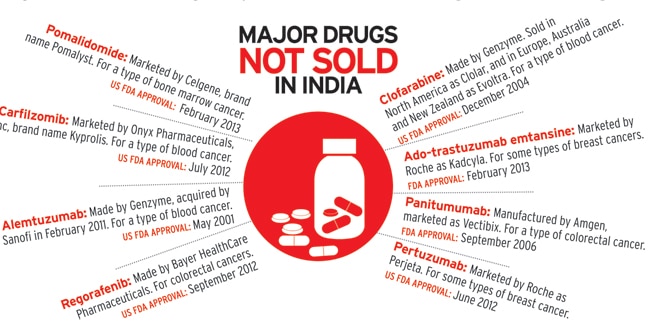 For a foreign company to launch a drug in India, prior approval in the US or Europe is not enough. The company must conduct "confirmatory trials" in India, to establish the safety and efficacy of the drug on Indians. The requirement can be waived in a few cases, such as a national emergency, but a Parliamentary standing committee has raised questions about some instances of waiver. In the light of this, many in the industry fear that the regulator, the Drug Controller General of India (DCGI), may take a risk-averse stance and insist on trials in every case. DCGI G.N. Singh defends trial requirements, saying that they are necessary to ensure patient safety.

So far, the only way out is for doctors to write to the companies and get medicines delivered on a case-by-case basis, either under the patient's personal import licence or through the drug manufacturer's patient assistance programme.

For example, Palaki Satya Dattatreya, an oncologist at Omega Hospitals in Hyderabad, which specialises in cancer care, procured three drugs under patient assistance programmes: regorafenib from Bayer, crizotinib from Pfizer (it has since become available in India), and plerixafor from Aventis. So three of his patients could benefit from these drugs. This solution is clearly not scaleable. Patients have to take care of getting import clearances and duty exemptions. Ajaikumar of HCG says: "We have been using this measure, too ... but it is not easy. It is a long drawn out process that could take up to three months, and that is precious time lost by a cancer patient."
TweetYoutube
Tags: Cancer drugs | Cancer drugs in India | New cancer drugs

A portable warmer comes to the rescue of premature babies

Non-executive directors at Indian firms have not proved effective