Experts expect the stock market to take off later this year. In August and September last year, Nimesh Shah, Managing Director and CEO of ICICI Prudential Mutual Fund, went to the US with his investment team, to meet managers of pension funds, hedge funds and institutional investors. By the time the contingent returned to India, they had turned bullish on the Indian equity market.

Shah says they were positive on India to begin with. "But the confidence shown by foreigners in India and its equity markets have made us turn bullish on equities since October last year, as we also saw plenty of value in the market," he adds.

US investors aren't the only ones. Gary Dugan, Chief Investment Officer for Asia and the Middle East in RBS's wealth division is also optimistic on India. Indian equities make up four to five per cent of his personal total equity portfolio, as they did last year. "We are overweight on India, but a correction by five per cent will see us turning bullish on India," he says.

See  video: Why you should buy Business Today's March 2, 2014 issue

One reason why investors are still optimistic about India is that there aren't many markets in the world that offer opportunities to earn good returns. Despite dismal growth, high inflation, high fiscal and current account deficits and bad governance, India still managed growth of 4.5 to five per cent. If one views India in isolation, this growth is below its potential, but compared to other emerging markets and the world, India is faring better than many and expected to do better. "The worst seems to be over," says Shah of ICICI Prudential Mutual Fund. "We are at rock-bottom, and from here I see it improving rather than becoming bad."

24,000 in 2014?
More than economic growth, two things that are important for the Indian equity market right now are inflows of money from foreign institutional investors (FIIs) and a stable government at the Centre. The Indian market continues to be liquidity-driven, and FIIs have been its backbone.

"FIIs expect Narendra Modi will come to power," says Dugan. "They want a leader who can bring the change." He adds that this was exactly why markets rose after state election results in December. On December 9, 2013, the BSE Sensex scaled an all-time high, touching 21,483.74. This high came nearly five years after the index's previous record of 21,206.77 on January 10, 2008.

"Though the BSE Sensex is back to the previous peak, the market hides more than it reveals," says Prashant Jain, Executive Director and Chief Investment Officer at HDFC Mutual Fund. "The top 10 stocks may be reflective of the Sensex being at 50,000, while the bottom 10 stocks are reflective of 10,000 levels." He says that although the Indian market is still attractive, investors need to be picky.

{blurb}He also doesn't see elections making a difference to the market. He says: "Elections don't affect the direction of the market. It is volatile on the day of the results, but overall, the equity market has always been positive following a stable government coming to power." He says he believes improved corporate earnings will help drive the Indian market upwards.

Abhay Laijawala, Managing Director and Head of Research at Deutsche Equities, says: "2014 will mark the beginning of the bull market in India. It is likely to be a year of many inflection points for India and its equity market. What sweetens India's investment thesis is the bottoming of the economic growth and the corporate earnings cycle witnessing a second successive quarter of recovery, but most importantly investments seeing a glimmer of hope mainly driven by public sector projects." In January itself, the government cleared nearly Rs 30,000 crore worth projects. 2014 will mark the beginning of the bull market in India: Abhay Laijawala, Managing Director And Head Of Research, Deutsche Equities
What will further influence the market and have a potent impact on the Indian market is the end of record selling by domestic institutional investors (DIIs) in 2014. In 2013, India saw record selling by DIIs - net sales of $13 billion, offset by $20 billion worth of FII buying.

DII selling is nearly at an end, mainly driven by the end of redemption pressure on insurance companies. The reason for this is regulatory changes in unit-linked insurance plans (ULIPs) in 2010. This saw the three-year lock-in period for ULIPs end, and increase to five years. This means that for 12 to 15 months beginning March, a major sell-off by insurance companies is unlikely. On the other hand, fresh inflows are likely from insurance companies and mutual funds. Mutual funds account for one-third of the DII inflow. Overall, the equity market has always been positive following a stable government coming to power: Prashant Jain, Executive Director & CIO, HDFC Mutual Fund
Laijawala says: "The pace of recovery will depend on the election. A stable government at the centre will emerge as a key catalyst for the market." By the end of 2014, he says, he sees the BSE Sensex at 24,000.

"Indian equities will likely see a broad-based rally in 2014 as against a narrow movement last year," adds Gopal Agrawal, Chief Investment Officer at Korean-based Mirae Mutual Fund, which has doubled its mid-cap exposure in recent months.

In January 2014, however, the Sensex fell by three per cent. The decline comes after a 21 per cent rise between September and December 2013. The equity market is not a one-way street - what goes up too high and too fast must come down. So a 10 to 12 per cent correction from current levels isn't unwarranted. In fact, a correction should be seen as a healthy signal for the market. 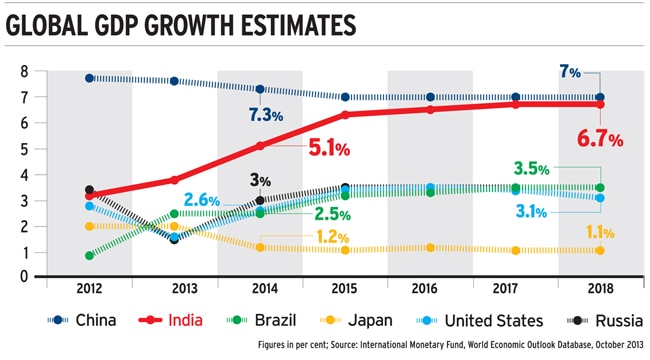 Easy money to continue
Current economic indicators suggest that the US economy is recovering, and that the appetite for risk is returning. But there are still doubts about the recovery. Economic growth is driven by credit growth, and it remains to be seen whether growth will continue in the time of the taper. Richard Duncan, chief economist at Blackhorse Asset Management, says he does not think the US can grow without the help of the Federal Reserve. "I think in the second half of 2014, the Fed will backtrack on its taper programme and continue to pump money into the US economy," he says.

This is because inflation has not picked up despite the money pumped into the US economy, and that will be a key factor to watch. "The US economy is at risk of deflation," says Duncan. "The price index for personal consumption expenditure (PCE) is trading at a low of 1.1 per cent. At these levels, the Fed can't stop printing money in 2014." PCE is the preferred gauge of inflation for the Fed, which has an inflation target of two per cent before it can consider raising rates.

The other reason the Fed can't stop printing money is because, unlike last year - when there was excess liquidity to fund the government deficit - the Fed will not be able to create that excess liquidity this year due to the taper. So economists such as Duncan believe the Fed will pump more money in during the second half of 2014. Last year, the Fed infused $1 trillion in the US financial markets through bond purchases, while the government's budget deficit was $680 billion, thus creating over $300 billion excess liquidity in the market. This lifted the US stock market by 30 per cent and property prices by 13 per cent. If the taper continues and this liquidity dries up , it will make it difficult for the US government to finance its own budget deficit, which will have an adverse impact on property and stock prices there.

Then there's Japan, which has made it clear that it wants inflation at any cost. Japan is printing an enormous amount of money to end its 20-year era of deflation. Excess money from Japan is expected to flow into emerging markets, and particularly India. 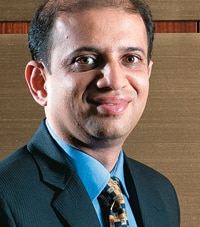 The confidence shown by foreigners in India and its markets has made us turn bullish on equities since October: Nimesh Shah, MD & CEO, ICICI Prudential Mutual Fund
Undervalued rupee a safe bet
Even if the US taper continues, India is in a good position to handle it. Markets - particularly the equity market - will get hurt if others in the region go down, but India is better off than its emerging-market peers because it has already gone through the pain. Last year, the exchange rate plummeted from Rs 52 to the US dollar to Rs 68, before recovering and trading steady between Rs 62-64. Credit for this goes to the Reserve Bank of India's effective approach to tackling the rupee's decline. Some experts say the rupee is currently undervalued by 50 per cent. Going by the Big Mac Index, it is undervalued by 66.8 per cent. The Big Mac Index compares the cost of McDonald's Big Mac burgers in about 120 countries, and calculates exchange rates that would result in hamburgers costing the same in the US as they do abroad.

The RBI has also shored up its foreign exchange kitty to safeguard itself against any selling. Currently, foreign exchange reserves are $292 billion. India is also working to reduce its fiscal deficit. "The biggest comforting factor for the Indian market is that FIIs have made their intention clear that they will get greedy at an index of 18,000, and also if the rupee falls below Rs 65 to the dollar," says Shah of ICICI Prudential MF, clearly indicating a protected wall around Indian equities.

The biggest negative for Indian market would be an unstable government at the Centre. Barring that, most negatives have been factored into the market. Lower and stable oil prices, too, augur well for India, helping it to cut its deficits. The probability of committing a mistake and going wrong is lower. Given this scenario, it's time to get greedy, rather than sitting on the fence, before the bull starts to charge.

Start-ups attracting talent in droves from IITs and IIMs