Not just a lockdown phenomenon anymore, online casual gaming has truly gone mainstream in India, with an estimated 450 million users at the end of FY22

Gaming has gained immeasurably from the penetration of cheap mobile data, which has lowered entry barriers for people
Sohini Mitter

The Indian gamer was a rare breed even a decade ago. Not anymore. The country skipped a generation of gaming—PC and console-based games, which are popular in developed markets—and went directly to mobile gaming. It almost mirrors India’s mobile-first internet demographic, where hundreds of millions of users skipped desktops and laptops, and tasted the web for the first time on their smartphones.

Like many other industries, gaming has gained immeasurably from the penetration of cheap mobile data, which has lowered entry barriers for people. Anybody with even an entry-level smartphone can download a gaming app off the Google Play Store, and add to the burgeoning mobile gaming audience in the country.

India today is the world’s largest online gaming market by app downloads, according to analytics firm Sensor Tower. As of May 2022, the country accounted for 916 million instals, or 19.2 per cent of total worldwide downloads of games. In January, this number was at 761.8 million, or 14.6 percent of global downloads, indicating steady growth. “The pandemic did one thing for the gaming industry—it converted non-gamers to casual gamers. Gaming companies were far more aggressive in pushing their games since people had more time on their hands,” says Gaurav Agarwal, Co-founder of Gamezop, a mobile gaming start-up. The monthly rate of non-gamers turning casual gamers may have come down now, “but those who became gamers during the lockdowns continue to game regularly,” he adds.

In 2020, buoyed by the rapid growth in new users, downloads, and app engagement, online gaming as a segment outperformed most other media and entertainment (M&E) segments in India, according to KPMG. “The lockdowns were a tipping point for the industry, with [the number of] people playing online games higher by 20-25 per cent than pre-Covid-19 levels. The lack of physical social interaction coupled with increased disposable time at hand led to the growth of Ludo King and other social games during 2020 and 2021,” says a KPMG spokesperson. “These games have been going strong since then.” 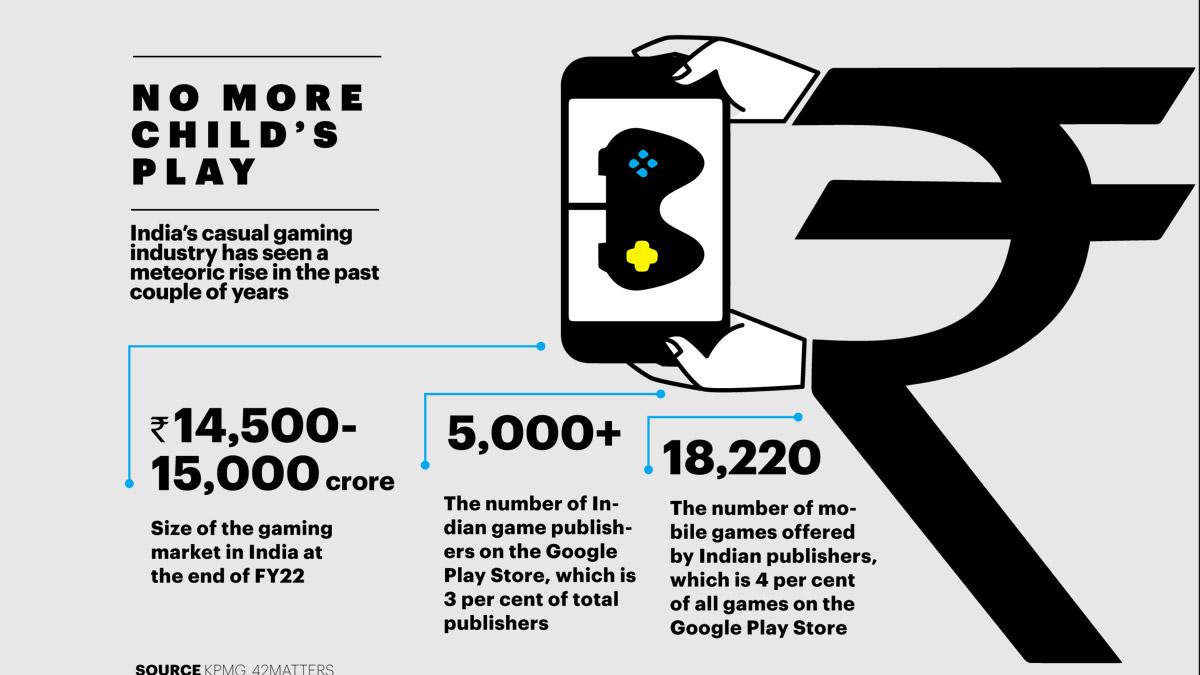 Take Ludo King, for instance. A ‘lockdown sensation’ and India’s most downloaded game of all time, it crossed 800 million global instals in June 2022, growing from 300 million in December 2020. Not only did it attract an all-new demographic of players (45+ years) during the lockdown, it also turned gaming into a mainstream entertainment alternative and a social interaction tool.

Gamezop, meanwhile, licenses HTML5 games from developers and integrates it in non-gaming platforms like Amazon, MX Player, Vodafone, Airtel, etc. It has been pushing integrations aggressively after the pandemic. “In the first series of lockdowns, we were aggressively releasing these integrations, and saw the sharpest rise in user numbers. This was the Ludo King phase,” says Agarwal, adding, “Today, gaming has become a lifestyle choice.”

Besides social multiplayer games such as ludo, carrom, and pool that gained popularity during Covid-19, India is also seeing an uptick in games like Battlegrounds Mobile India (an Indianised version of PUBG) and cricket-based games, “which are evergreen”, says KPMG.

“The market was dormant for a long time. Casual games were difficult to monetise. Then things started to change with the battle royale games (PUBG, Free Fire, BMG) that redefined the market. These game publishers have managed to get in-app-purchases (IAPs) on a very high scale, and are now generating $150 million-plus in revenues a year for each title,” says Piyush Kumar, Founder & CEO of Rooter Sports, a games streaming platform.

Monetisation has always been a challenge for any content business in India. And gaming is no different. While the sector has seen significant growth in consumption in the past three years, monetisation has lagged due to the fact that neither game subscriptions nor IAPs—both established revenue models in mature markets—have caught up in India because it never saw a strong console gaming culture.

However, the pandemic years have brought about a welcome change, with India seeing growth in gaming average revenues per user (ARPUs). From approximately Rs 150 in 2017, casual gaming ARPUs are poised to touch Rs 268 by 2024-25, according to KPMG.

“One of the biggest positives for the sector in the pandemic has been the growth of ARPUs. Currently, Indians are consuming games at an unparalleled pace. ARPU growth in India is at the highest level,” says Vishal Gondal, CEO of mobile games company nCORE Games. “However, even with this growth, it is clear that Indian developers and publishers will have to innovate on monetisation.” Gondal, a gaming veteran who famously sold his company Indiagames to Disney for $100 million in 2011, ramped up game development at nCORE Games in the middle of 2020. “During the first year of operations, we noticed an untapped opportunity for localised and category-defining interactive entertainment content. That led us to start work on titles like FAU-G, Tappi, Pro Cricket Mobile and Apna Games,” he says.

Local, Indianised games are not only attracting users, they are also creating unique ad monetisation opportunities for brands. “Advertisers are particularly looking at rewarded ads as a tool to attract the interest of gamers,” shares the KPMG spokesperson. “Even IAP-based monetisation saw an upswing post the lockdown. Indians across digital media are getting increasingly comfortable with paying for entertainment online, and the same applies to gaming as well.”

More importantly, with millions of new users taking to gaming during the pandemic, customer acquisition costs (CAC) for game developers has come down by 60-70 per cent. “In the first year of the pandemic, gaming companies realised that their content had become more useful in the lockdowns. As a result, more ad inventory opened up for them, and that’s why CAC went down at the start,” explains Gamezop’s Agarwal.

Cut to 2022. Web 3.0 and the metaverse —terms becoming more ubiquitous by the day—are being called the future of gaming. “Finance and gaming are two of the biggest applications of Web 3.0,” asserts Rooter’s Kumar. “The advantage in Web 3.0 is that any currency or asset you earn in a game can be used across other games. This is not available in Web 2.0. The ‘play-to-earn model’ is also picking up. You can earn cryptos and NFTs in Web 3.0, and the more you play, the more you earn.”

Industry watchers say a lot of marketing dollars are also flowing into gaming right now, and the future of brand engagements “is very bright”. “A certain age group has moved away from Netflix. They are either watching a game or playing it. In Web 3.0 and the metaverse, they can also interact with the games. Advertisers can enable commerce in them, and create newer monetisation models,” explains Kumar.

nCORE Games, for instance, has partnered with top Web 3.0 and interactive entertainment companies like Animoca Brands and Galaxy Digital. “We are investing significantly in exploring Web 3.0 and cryptocurrency models within our games,” reveals Gondal. “We believe these concepts will usher in a new age of gaming that will empower end users, especially those in low-ARPU countries [like India].”

In the Web 3.0 universe, all games will be “economies in themselves”. Audiences will pay for the premium content that will, in turn, increase ARPUs. “Advertisers too will be willing to pay more because the metaverse is new and trendier,” says Agarwal. “The predominant form of monetisation in Indian gaming will be advertising. And that is not going to change anytime soon,” he states.

And that may not be a bad thing for a nascent industry.