The rustic quiet of Pahur village in Maharashtra's Jalgaon district is broken by Dilip Deshmukh's powerful voice, which belies his slight, 50-yearold frame. The farmer owns 40.5 hectares (a hectare is 2.47 acres) of land, of which one-fifth is banana orchards. In February, he bought a drip irrigation system for four hectares of his banana farm spending Rs 2 lakh.

As agriculture in India modernises - micro irrigation via drips or sprinklers can cut water use by up to 70 per cent, depending on the crop, soil and climate - farmers like Deshmukh are prime customers of companies selling such systems. The market for micro irrigation systems is Rs 3,000 crore today but long delays in release of subsidies under schemes funded by the central and state governments are coming in the way of bigger revenues for the companies.

Farm equipment is financed through banks or NBFCs worldwide, including India. Micro irrigation is also getting there: Anil Jain
Some Rs 72,000 in subsidies on Deshmukh's February purchase, for instance, is yet to be released to Jain Irrigation Systems. To reduce the large receivables - estimated at Rs 1,700 crore, of which subsidies account for Rs 1,300 crore - on its books, Jalgaon-based Jain Irrigation plans to start a non-banking finance company, or NBFC, by March 2012 that will help farmers finance purchases of irrigation systems. The NBFC plan, announced early this year, is part of the industry's attempt to alter its business model to sustain growth. The sector has grown at a compound annual rate of 25 per cent for the past four years but delays in the release of subsidies are a big problem. India has some 200 micro irrigation companies, and the biggest is easily Jain Irrigation - it is also the world's second largest, after Israel-based Netafim - with nearly 45 per cent of the market. 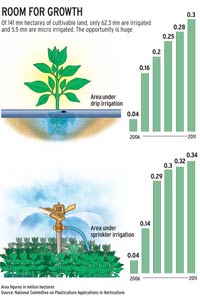 Click here to Enlarge
Farmers can seek subsidy for up to five hectares every 10 years. Between 2005/06 and 2010/11, the central government disbursed nearly Rs 2,750 crore in micro irrigation subsidies.

Delayed and denied
Some farmers get less than the minimum central government subsidy if the cost exceeds the government's estimates, says Krish S. Iyengar, Joint Secretary of the agriculture ministry's National Committee on Plasticulture Applications in Horticulture, or NCPAH.

Ideally, it shouldn't take more than 45 days for the subsidy to be disbursed, but it sometimes takes up to 12 months: Satish Ghatpande
Then there are the delays. When a farmer buys a micro irrigation system through a dealer, he pays his share, and asks the district-level government agency concerned to forward the subsidy to the company. Satish Ghatpande, Executive Director of Pune-based micro irrigation systems manufacturer Finolex Plasson Industries, says: "Disbursal should take no more than 45 days, but sometimes takes up to 12 months." So the company and dealer have to borrow to meet their working capital needs.

Among the worst off is Andhra Pradesh. Anil Jain, Managing Director, Jain Irrigation, says Maharashtra, which together with Andhra Pradesh accounts for 55 per cent of his company's sales, has also had problems in the past year. Gujarat stands out. "It releases subsidies in 40 to 45 days," says Ghatpande. Iyengar of NCPAH concedes there are delays, but says: "We have to inspect the systems and that takes time."

A burden shared
The longer the dealer takes to collect the subsidy, the longer the company's working capital cycle gets. Mahesh Chauhan, a Finolex Plasson dealer in Burhanpur district, Madhya Pradesh, says: "Most of the time, we use our own funds. If subsidies don't come in on time, we suffer."

To get around the problem, Jain Irrigation's NBFC, which is awaiting the approval of the Reserve Bank of India, or RBI, will lend to farmers so that the company gets the full price at the time of the sale. The farmer then assigns the subsidy to the NBFC. An NBFC firm at Netafim's Indian operations may be next. Netafim India is the country's second biggest player, with a 15 per cent market share. Industry executives say it has RBI permission, and will set up the NBFC next year. Managing Director Randhir Chauhan declines to discuss it, but stresses on the need for change.

"In some states, farmers bear some of the burden of delays by borrowing." Smaller companies cannot set up NBFCs, but are also trying to make life easier for debtors. Nagarjuna Fertilizers and Chemicals, which has receivables of Rs 60 crore, has a cashand-carry model, for instance. "But we give dealers cash discounts if subsidies are delayed," says R.S. Nanda, Senior Advisor. Finolex Plasson is discussing a credit scheme for dealers with banks, but Ghatpande is tight-lipped about details. The firm expects revenues of Rs 200 crore this year, up from Rs 170 crore in 2010/11. 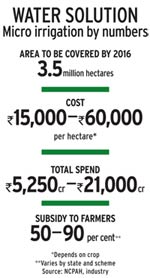 Jain Irrigation is the only large and listed micro irrigation company, and investors have been cagey about its NBFC plan, with a planned initial investment of Rs 200 crore. When it proposed this in February, its share price fell by a third to Rs 157.50 in three days. Currently, it is Rs 123 - less than half its 52-week high last December; the Sensex fell 24 per cent in the same period.

Manoj Baheti, Associate Director, Institutional Research, Edelweiss Securities, says the NBFC's success is key to Jain Irrigation's growth. "The company's debt-equity ratio is 2X, and working capital loans are nearly half its total debt of about Rs 3,000 crore," he says. "The NBFC will take some pressure off its balance sheet." Jain says he will pass the benefit of lower working capital loans to farmers.

Despite the challenges, more companies have entered the sector recently. Mahindra & Mahindra did so by acquiring EPC Industrie. Godrej Agrovet is in talks with an Israeli company. "Farm equipment is financed via banks or NBFCs across the world, including India. Micro irrigation is also getting there," says Jain.

When it does, the impact will not just be on the books of micro irrigation companies. Farming in India, ever dependent on the rains, may see transformation like never before.
TweetYoutube