The patriarch, who once doggedly pursued joint ventures with global majors, now wants his son and daughter to build their own tech-savvy next-gen brand.

Jostling for a piece of the family silver is something B.K. Modi has been privy to on several occasions— from extremely close quarters. In the ’80s—at a time when the unified family ranked amongst India’s top 10 business groups—the group was laboriously carved up amongst the eight sons of the two founding patriarchs, Gujar Mal and Kedar Nath. More recently, B.K. had little choice but to opt out of Modi Rubber after his brother V.K. wrested control. B.K. went on to severe all links with the family, and erased all crossholdings between his companies and those of the group. B.K. Modi (C) with his son Dilip and daughter Divya
So when Modi turned 60 in January this year, one of his top priorities would have been to ensure that his kids don’t have to push around for a piece of the business pie. Son Dilip, who, at 35, is a veteran of sorts in the B.K. Modi Group, and daughter Divya, 25, have been apportioned equity in Indian and Singapore-based holding companies, although BK himself will continue to hold enough to still be controlling the business. Elder daughter Ritika has chosen to, in B.K.’s own words, “do her own thing”, along with husband Nikhil Rungta. The couple own and manage Plus Paper, which manufactures paper cups for fast food retailers like McDonald’s.

Modi has chosen to dovetail the initial elements of a succession plan with yet another restructuring exercise at his group. Flush with funds after selling his 40.8 per cent stake in his mobile telephony operations, Spice Communications, to the A.V. Birla Group in June 2008 for Rs 2,720 crore, Modi finds himself in a rather quaint position of being an old hand at business, but with few physical assets—other than 600 telecom retail outlets and Spice Mobile's cell phone manufacturing unit in Uttar Pradesh —to show for his efforts. Unsurprisingly, Modi is now talking about investing in technology and knowledge spaces, in businesses that will be spearheaded by Dilip and Divya.

The telecom venture under the umbrella of Spice Televentures will garner scale primarily from the retail operations. Dilip, the Chairman of the company, says the plan is to have 5,000 stores, with each store contributing Rs 1-1.5 crore annually. That business itself should be in a position to yield a top line of Rs 5,000-7,500 crore. Yet another lucrative pie he is eyeing is the Rs 4,500 crore market for technologies for value-added services that will be targeted at mobile carriers. Another big play is the entertainment business that’s headed by Modi himself. Group entity Buddha Films is producing an international film on Gautam Buddha directed by Ashutosh Gowarikar.

Virgin territories for Modi are finance (asset management) and education (digital rather than classroom). So, what is Modi attempting? Is he trying to create a sound launch pad for his children or is he trying to gainfully deploy the sale proceeds of the telecom operation in more contemporary businesses? The answer could well be that he is trying to do both. Analysts don’t fault the areas identified; what they worry about is the lack of management bandwidth of the group, which has few professionals of note. The Modis reply that a clutch of seasoned professionals is expected to come on board, particularly in the finance vertical.

Modi, who is, perhaps, as well known for the hat he wears as he is known for his flirtations with global foreign majors in a string of joint ventures, is no stranger to makeover. In 2004, he changed the name of his holding company to MCorp Global after shifting base to New York. This time around, he’s changed the name to Spice Global and has made Singapore—where he’s purchased a penthouse worth $10 million (Rs 48 crore)—his station. “I want to work with businesses that my children will be interested in running. Therefore, I am exiting all businesses that I had created and am letting my children create new businesses,” declares Modi.

Modi likes to point out that the restructuring taking place is, perhaps, the first instance of a daughter getting almost the same share as a son in a Marwari business—Dilip owns 25 per cent and Divya 24 per cent in the group. While Dilip has been working with him for 12 years, Divya is relatively wet behind the ears. Is Modi preparing the ground for her to run her own ship in the years to come? “It all depends on how well she performs. She could do well or she could get frustrated and leave the group. But if she does well, she will eventually take over,” says B.K.

In a far cry from the Modi businesses of the past, the current structure is service-oriented, with Modi seeming visibly enamoured of technology and the new generation. And he’s ready to put his money where his mouth is— Rs 300 crore in entertainment, Rs 200 crore in telecom and in finance where the group will be a ‘special-situation’ investor, Rs 500 crore has been set aside as the initial corpus.

For the special-situation fund— which will operate more or less like a private equity player—Modi has sealed a joint venture asset management firm with Three Degree Asset Management of Singapore. “We are starting as a proprietary fund, but we will have third party investors soon. Also, we have a lot of arrangements in place with banks, which will step in with funds for specific investment opportunities that they may like; they can hold shares directly in these companies along with us,” explains Divya. A non-banking finance company called Spice Bulls has also been flagged off. 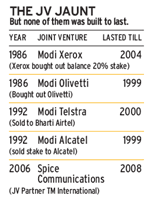 On the telecom front, Dilip has been a part of the Modi telecom sojourn ever since Modi Telstra bagged the Kolkata metro licence in an auction in 1994; the group also had the honour of connecting the first mobile phone call in India between then West Bengal Chief Minister Jyoti Basu and then Union Minister for Telecommunications Sukh Ram in 1995. It had also set up the first mobile telephony equipment manufacturing unit with Alcatel. Along with telecom retail, Dilip is looking to back innovations by start-ups. “Spice Labs will work on new technologies and I-Cube will fund innovations. In fact, I-Cube, which has a core team in place, is evaluating four business plans right now,” says Dilip.

The Modis are not one to lose out on a bullish spell. They are keen to list Spice Televentures on the stock markets. The company is hoping to ride on a Rs 2,000 crore top line, and garner an attractive valuation. Will investors bite? Says V.K. Sharma, Head (Research), Anagram Stockbroking: “The market is now ripe for IPOs. The recent upward movement has created space for IPOs. However, the perception of the investing community about this group is nothing great.”

Will Modi stick to the current framework? A recent attempt at opportunistic inorganic growth, to acquire Satyam, didn’t work out; neither did a bid for VSNL when it was thrown up for disinvestment in the early 2000s. Modi doesn’t rule out more such attempts as long as they fit in the current scheme of things. He also has something he didn’t for a long time—his own brand, called S. “Earlier, we didn’t focus on creating our own brands (with reference to joint ventures like Modi Xerox, Modi Olivetti and Modi Telstra). We now have a digital brand that we can even take abroad and localise. It’s like a window (to the world),” points out Modi. It’s up to Dilip and Divya to ensure that window stays open for some time to come.