A five-month-old start-up is lending a helping hand to patients just discharged from hospital. 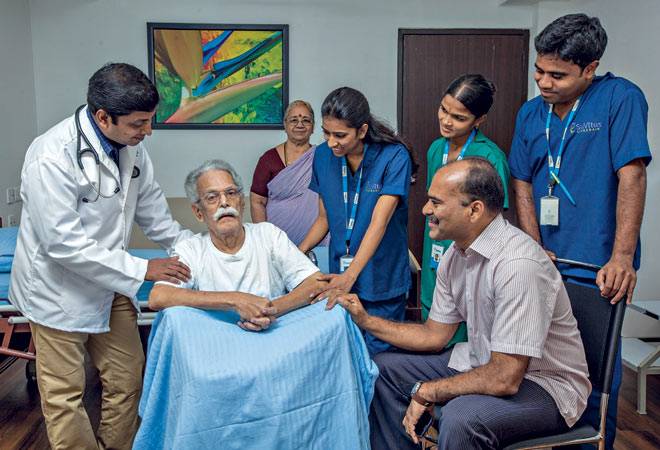 SuVitas Co-founder Bipin Pendyala (on the chair) with a patient, A S Prakash Rao, at the Hyderabad facility (Photo: A Prabhakar Rao)

On November 5, Hema Ramakrishna, 44, a resident of Vijayawada, was relieved. She was told that her husband, Ramakrishna Rao Raparla, 50, bed-ridden with poor orientation and alertness for the last four months, would be soon given oral feed. It was on July 5 that Raparla, who works in a construction-related business, had fallen sick. He was diagnosed with encephalopathy, a disease which affects the brain.

Raparla spent 40 days in the intensive care unit of a hospital in Hyderabad. After he was declared out of danger, one of the doctors suggested that he be shifted to SuVitas, a transition care facility in the city that takes care of people recovering from serious medical conditions. This is because hospitals are equipped to treat people who are critically ill but helping patients recover after a major treatment is not their forte.

Raparla was shifted to the SuVitas facility on September 7. Relieved that he will now be given oral feed, his wife tells Business Today that while he still cannot speak, his condition has improved. "He makes eye contact now," she says, adding that he understands what he is told and is able to even make unhappy sounds to express his displeasure. She intends to continue the treatment at SuVitas till December, by which time, say doctors, he could be on a recovery path.

USP: Calls itself the fi rst organised player in the transition care segment

Raparla is among the 52 people who have used the SuVitas facility in the last five months that it has been in operation. SuVitas, which calls itself a provider of in-patient transition care facilities for those who have undergone treatment for serious ailments but have not recovered enough to go home, combines protocol-based care plans with personalised attention in a home-like environment. SuVitas combines "Su" (Good in Sanskrit) and "Vita" (Life in Latin).

SuVitas, says Bipin Pendyala, the Co-Founder and Managing Director, comes between hospital and home care. "What is offered is a range of services, including physiotherapy," he says. SuVitas also offers occupational therapy, which involves helping the patient get back to doing his or her routine activities like dressing and self-feeding. It also has a speech therapist who customises treatment as problems may involve inability to speak, swallow or read. It also offers psychological treatment for those recovering from neurological conditions.

But then, how will SuVitas differentiate itself from home health care providers which may emerge as a competition? After all, several players such as Dabur and Portea have emerged in this segment in the last 18 months. Medwell Ventures, too, has a home health care arm. In October, even Apollo Hospitals set up a home health care company.

Pendyala says home health care providers complement their work by taking care of patients after they are taken home. Also, transition care, unlike home care, involves use of several equipment and aids that are expensive and, therefore, difficult to use at people's homes.

SuVitas was founded with seed funding of Rs 5 crore by three people - Pendyala, Dr. Ramesh Byrapaneni and Sateesh Andra, Managing Partner at Ventureast Tenet Fund. Half of this has been used as capital expenditure.

Though Pendyala is careful not to discuss costs in detail, he says just the physiotherapy equipment costs Rs 50 lakh. The money needed to add a 50-70 bed facility is Rs 5 crore, half of which is capital expenditure, he says. Plus, there is a health-care team that includes physicians, nurses, therapists, dieticians and paramedics. Typically, a 60-bed facility has a team of five physicians, 24 qualified BSc/MSc nurses, 10 physio/occupational/speech therapists, two dieticians and two counsellors. Then there are about 35 paramedics, including ward boys. Plus, there are separate finance, administration, marketing and reception teams. This, says Pendyala, sets a transition care player on a different plane than a home health care provider. 'All these models of health care delivery (like transition care and home health care) that are coming into the Indian health care ecosystem are positive from the patient's perspective,' says Vishal Bali Co-founder & Chairman, Medwell Ventures (Photo:Vivan Mehra)
In the home health care delivery model, a trained nurse/physiotherapist/helper visits the patient at home. This person is equipped to address some of the patient's needs but may not be best placed to provide the comprehensive care needed immediately after hospitalisation, especially in critical conditions like neurological cases. This, says Pendyala, is provided under all under one roof at a transition care facility with its multi-disciplinary team of doctors, physiotherapists, nurses, dieticians and counsellors, aided in some cases by sophisticated equipment.

SuVitas is looking to enter Bengaluru and Mumbai in 2016. It is aiming to have 2,000 beds in the next four years for which it will need around Rs 120 crore. Currently, it is in talks to raise Rs 10-15 crore.

It was launched in June with a monthly revenue of Rs 5 lakh but in October it earned Rs 25 lakh per month. It hopes to get to Rs 60 lakh per month by March 2016 and Rs 300 crore per month in four years.

Not far from where Ramakrishna is recovering is A.S. Prakash Rao, a 75-year-old retired government employee diagnosed with Parkinson's disease, a condition of the nervous system marked by muscular rigidity and slow and imprecise movement. The condition of patients with the disease deteriorates progressively.

"We can slow the process of deterioration," says Dr. Vijay Janagama, Medical Director at SuVitas. This, he says, can be done by ensuring that medication is administered on time and physio/activity sessions are coordinated keeping in mind the patient's medication and diet. Sheila Addanki, the Care Coordinator who has looked after Rao since he was admitted on September 24, says he has better control now, his mood swings have reduced, his mobility has improved, and he is able to connect better.

However, does all this make transition care a good space to be in? Yes, say a lot of experts. A key reason is the need. Typically, tertiary care hospitals or super-specialists like, say, Apollo , Fortis and Max , focus on providing critical care and saving lives. Therefore, once the patient becomes medically stable, they prefer to discharge them as soon as possible and give the bed to another critically-ill patient. But at this stage, the patient may not be normal and in many cases may be unable to do everyday chores. For instance, in case of a stroke or a paralytic attack, the hospital may address the main problem through medication or surgery, but the patient will still face after effects like inability to talk, eat or move. In such a case, he would need skilled nursing care and regular physiotherapy, besides proper nutrition and emotional support. This is where players such as SuVitas come into the picture.

Vishal Bali, Co-founder & Chairman of Medwell Ventures, which runs Nightingales Home Health Services, says, "All these models of health care delivery (like transition care and home health care) that are coming into the Indian health care ecosystem are positive from the patient's perspective. These have permeated the western world and have done phenomenally well there." He feels these are becoming increasingly relevant for India, where most hospital beds are taken up by those with acute conditions.

What about the cost for patients? Hema Ramakrishna, whose son is doing MBA in Vijayawada, says, "It has cost us a lot but is certainly not more than his health."

She was, in fact, reluctant to have her husband photographed as she did not want anyone to see him go through this phase. "I want people in Vijayawada to see him return hale and hearty."

Why India's diamond industry is facing its worst crisis ever