Aarthi Subramanian is known for her determination to not settle for anything but the best.
By Ajita Shashidhar   Delhi     Print Edition: October 9, 2016 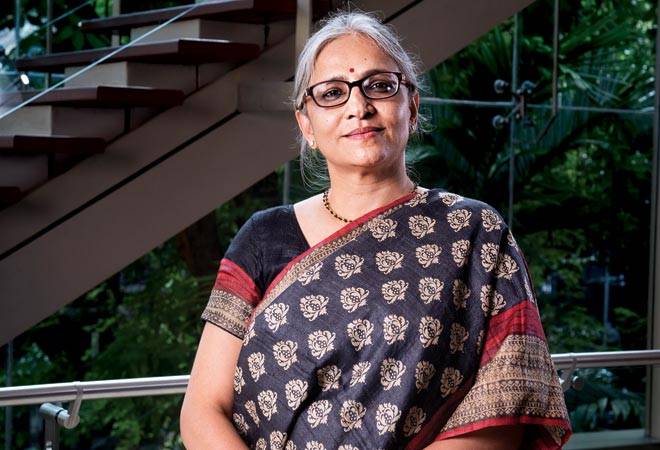 Not only does 49-year-old Aarthi Subramanian, Executive Director (Global Head - Delivery Excellence, Governance & Compliance) of the $16.54-billion Tata Consultancy Services, consider CEO N. Chandrasekaran her mentor, she is also a fitness freak like him. While Chandrasekaran is an avid marathoner who seldom misses his morning run, Subramanian walks at least six km every day; her target is anywhere between 10 and 12 km. So, be it in the snow-capped Davos or Mumbai's Marine Drive, this is one thing in her daily routine that never changes. "Walking helps me not only unwind but also do a lot of thinking," she says.

Colleagues fondly call Subramanian, who last year became the first woman employee to make it to the board of directors of TCS, as 'Ms Fixit'. "She has a solution for any challenge," says a young team member. They, in fact, see qualities of Chandrasekaran in her. They say she has a similar passion for excellence in work and determination not to settle for anything but the best. "Her incredible diligence, involvement with her team and compassionate attitude towards team members are traits that she has picked up from Chandra," says Ravi Vishwanthan, President (New Growth Markets), who has worked with Subramanian for 12 years.

Subramanian says she has picked up a lot of business and leadership qualities from Chandra. "The world 'rigour' is frequently used in TCS, and I really understood what that meant after working with him. It is all about being detail-oriented, looking at finer things. It's about perfection and not settling for the next best," she says.

A Bachelor in Computer Science from National Institute of Technology, Warangal, Subramanian, who joined TCS in 1989, has always been a hands-on operations person. She has worked on several global and Indian transformational projects. She was the head of the retail vertical before being given a corporate role in 2009. "Today, the responsibility is one level higher. It's all about how you navigate and collaborate and get things done on a large scale. Having a solid operations background makes it easier for me to relate and, more importantly, drive change," she says.

One of her most challenging assignments after she became Executive Director was the Passport Seva Project for complete makeover and digitisation of the passport issuing process. This was TCS's first citizen-centric programme in India. "We had to take end-to-end ownership of the transformation as they had little IT capabilities," says Subramanian. The biggest challenge, she says, was to manage the employees, who were resisting the change. "Aarthi, even Chandra, spent innumerable hours with the employees to make the process harmonious," says Vishwanathan. After the first pilot in 2011, TCS set up 77 Passport Seva Kendras (PSKs) across the country; the front end is managed by the IT services company. The entire process of issuing a passport, from applying online to police verification and delivery, has been reduced to about a week. "The project is very close to us. Even today we get fantastic feedback from citizens," says Subramanian.

Subramanian, say her colleagues, supports her team members working on a project even through the late hours of night. Ever since she became Executive Director, life has become fast-paced due to frequent travel. But on weekends, in whichever part of the globe she is, she doesn't miss watching a Bollywood film. She is a die-hard Amitabh Bachchan fan and has watched almost all his films. The latest film she watched was the Sonakshi Sinha starrer Akira. "Though I am a fan of films made in the seventies and eighties, I am not choosy. I watch any film that has got a decent review. Watching films is a good way to unwind, especially after a hectic week."

So, where does she see herself five years from now? "I see pushing not just myself but the entire team to do new things and continuously pursue excellence. There should never be a dull moment," she says.

Alice Vaidyan, the first woman in top post at a public sector insurer