Going Up in the World Textiles did remarkably well in an otherwise dull exports scenario in 2013/14. A weaker rupee and firm overseas demand helped the sector add $4 billion to overall exports of $312 billion, second only to engineering goods, which accounted for a $4.83-billion increase. Other export segments that helped increase export earnings were chemicals and related products ($2.25 billion) and petroleum products ($1.83billion), shows government data.

According to commerce ministry data, the share of textiles in export earnings increased from 8.78 per cent in 2012/13 to 9.72 per cent in 2013/14. Overall exports grew four per cent to $312.6 billion in the year ended March 2014. Had textile exports remained unchanged, overall export growth would have been less than three per cent. Petroleum products, which account for one-fifth of export value, grew only three per cent. Engineering goods, the second biggest segment, accounting for over 19 per cent of export value, grew 8.5 per cent. Gems and jewellery, the third largest contributor (over 13 per cent), declined more than five per cent. India Ratings said in its report early this calendar year that the economic recovery in key markets - the US and Eurozone - would continue to drive the order book of exporters in 2014/15. Export sales have also improved, as garment manufacturers have ventured into new regions such as West Asia, Latin America, Japan, Russia and Australia. "Most exporters are running on full capacity and also outsourcing manufacturing on a job-work basis, as order books are growing," the report notes. The agency sees a better outlook for the textile industry.

Improving export competitiveness over Asian peers such as China (on a depreciated rupee), a drop in raw material prices, and healthy demand from US and Europe not only boosted exports but also helped Indian textile companies earn higher profits in the last fiscal. "The trends (weaker rupee, and improving demand for garments and yarn), if sustained in 2014/15, are likely to improve the financial metrics of yarn and garment manufacturers", the rating agency said.

The net profit of the Ludhiana-based Trident Group, a leading textile company, grew 300 per cent to Rs 197 crore in 2013/14. Sustaining last year's momentum, however, seems to be a challenge. "The situation is not bright like last year. The exchange rate advantage is coming down sharply and demand from China is sluggish. While exports will continue, the industry's profitability may not be as good as last year," says Trident Chairman Rajinder Gupta. 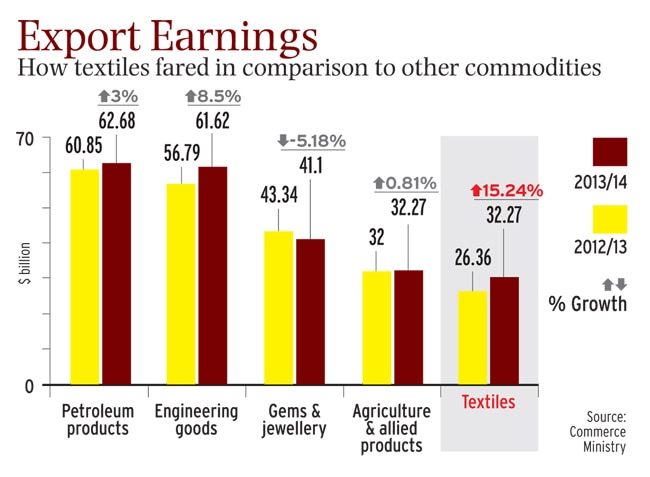 Besides the exchange rate, other external factors also influenced the industry's profitability in 2013/14. China became a large importer of cotton yarn as its government's policy was to keep domestic cotton prices high. The Chinese government was buying cotton from farmers at high prices, and selling it at a subsidised rate that was still higher than the landed price of imported cotton.

"Spinners outside China got an opportunity," says S.P. Oswal, Chairman and Managing Director, Vardhman Textiles. "Our exports of cotton yarn to China almost doubled last year, and that has driven profitability. India, Pakistan and Vietnam are major beneficiaries. Depreciation of the rupee had helped Indian exporters. The industry had stocks that were bought at a time when the currency was stronger." Vardhman reported an all time high net profit of Rs 652 crore in 2013/14, more than twice its 2012/13 profit of Rs 324 crore.

Oswal says the availability and cost of labour is also becoming an issue in China. "We must take advantage of this situation. As exporters, we must be allowed to hire temporary labour. Garment exporters cannot survive on permanent labour, since demand is highly volatile."

Garment exports from India also picked up in 2013/14. Bangladesh's exports suffered after 1,000 workers perished in a textile factory fire there last year. "Bangladesh exports garments worth $26 billion a year," says Oswal. "Global buyers shifted from Bangladesh to Vietnam and India. Our garment team is busy." 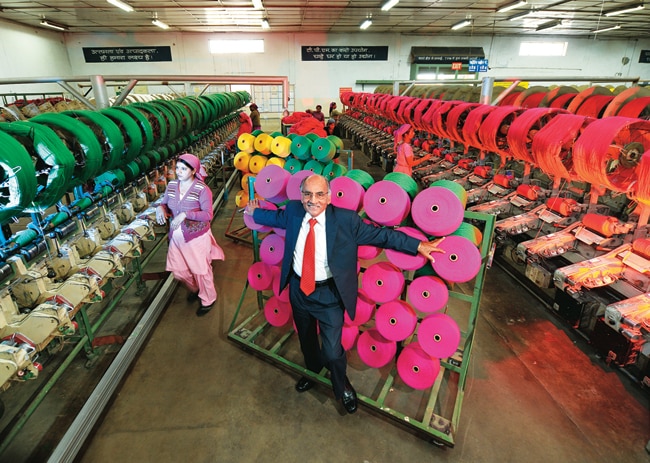 The Chinese government has lowered the minimum bid price for cotton in auctions by 750 yuan or 4.2 per cent, to 18,000 yuan per tonne, from April this year. Indian exporters fear that this will impact their business. According to the Cotton Textiles Export Promotion Council of India (Texprocil), there is increasing anxiety in the industry due to recent developments in China's cotton policy, as that country is a major importer of cotton and cotton yarn from India.

However, according to Texprocil, the price difference between Indian and Chinese cotton is quite large. "In fact, prices of Indian cotton yarn after duty and taxes in China are still very much lower than Chinese domestic yarn prices," it said in a recent statement. 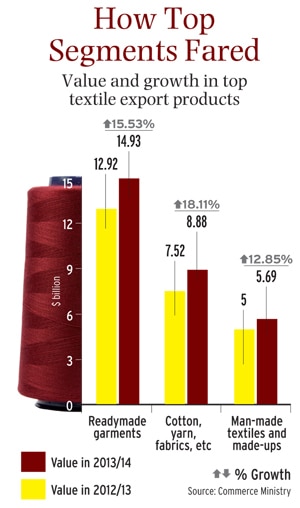 Some say the advantage that Indian textiles enjoy in export markets has narrowed, and this will impact profitability. Dinesh Oswal, Managing Director of Nahar Spinning Mills, says the current fiscal year will be challenging. "We were alive due to rupee depreciation, which helped us be competitive in the export market," he says. "Exports to China helped prevent a glut in the Indian market. This kind of profit may not be sustainable now."

Tanu Sharma, Associate Director, India Ratings, says: "The benefit of rupee depreciation, which had made Indian exporters globally competitive, has mellowed down, but not all are affected. Most exporters would have hedged the currency. They also tend to renegotiate prices with declining advantage of a weaker rupee." Sharma adds that overall, there seems to be no slowdown in export demand, but there will be pricing pressure because of the exchange rate and a possible change in Chinese policy to reduce reliance on cotton and yarn imports.

Why some entrepreneurs delay VC funding for their start-ups