iGate has come a long way since Phaneesh Murthy took over the reins from Gerard Watzinger, a German, in July 2003. Murthy has drawn up ambitious plans for taking iGate into the big league of IT services companies. But will his gambit pay off? Rahul Sachitanand finds out.

Phaneesh Murthy
It is 7 a.m. on a misty January morning in Bangalore. At the headquarters of iGate Global Services in Whitefield, one of the city’s best known IT suburbs, only the earliest risers are at their desks. On the second floor of the Denali Block, however, work is already in full flow, as Phaneesh Murthy, the company’s Chief Executive and his team of Sean Narayan, iGate’s IT Services Delivery Head, and CFO N. Ramachandran, are already in their shirtsleeves, as they prepare to review the company’s third quarter numbers and set targets for the full financial year. A day after declaring promising results, Murthy and his team are back to the drawing board and looking for more ways to tighten costs, improve margins and enhance profitability.

iGate has come a long way since Murthy took over the reins from Gerard Watzinger, a German, in July 2003. Then, the company was just taking its first baby steps into the super-charged world of outsourced IT services.

Its Indian rivals, such as TCS, Infosys and Wipro, were wellentrenched in the game and MNCs like IBM and Accenture were beginning to buy and build their way into the market. Murthy had his hands full—he had to turn around this company (it had operating margins of just 5 per cent) as well as quickly build scale and improve profitability to prove iGate’s longevity in a fast-consolidating market. “We had to completely overhaul the business,” Murthy says. While flying plane loads of eager techies may have been a profitable way of doing business in the ’90s, the market changed at the turn of the century and iGate was caught on the wrong foot. 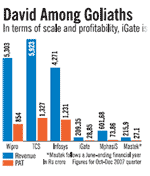 Murthy has taken his time fixing operations. “We’ve increased our margins from low single digits to 15 per cent and want to attain the margin structure of large caps,” he says. To do that, he has completely redefined the way iGate does business, shedding all its subcontracting work, moving away from small and fragmented customers and reducing the importance of its main customer, GE, on its revenues. “GE used to account for more than 60 per cent of our revenues, but now this figure is down to 25 per cent. We have exited the sub-contracting business entirely and now get 95 per cent of our business from Fortune 1000 customers,” he says. Of course, this has happened as iGate has moved completely away from its legacy IT staffing business and morphed into an IT services and consulting vendor.Now, Murthy plans to author the next big shift, moving iGate (and, hopefully, the IT industry) to the next stage of evolution, by making companies pay per transaction, rather than for effort (or dollar-per-hour) followed today. “The Indian IT industry effectively killed the 10-year contract that CIOs followed in the early ’90s.

We want to do the same thing with the current pricing system,” says Murthy. Central to Murthy’s bravado is the iTops (Integrated Technology and Operations) model that seeks to move the focus of operations to cost per transaction from cost per hour.

His colleagues say that iGate is among the earliest to make such a transition, and add that they are winning strong client backing. “Several large customers are confident about our new pricing model,” says CFO N. Ramachandran. Murthy himself sounds evangelical when he speaks about this transition.

“This is not a lab experiment; we and the market itself to be worth several billions of dollars,” he says. While Indian IT companies initially focussed on applications development and maintenance contracts in the early years of offshoring and addressed a market of around $25 billion, they have today expanded their horizon to include newer areas like testing, remote infrastructure management and BPO, increasing the total market to as much as $3 trillion (Rs 120 lakh crore), according to Murthy.

Best in the business

Opening up new markets is not something new to him. He did that with élan in the lucrative US market in the 1990s as the marketing head of Infosys. In fact, he gave Infosys its first multi-million dollar deal, with Nordstrom for a sales order management package in 1994. Two years later, Infosys notched up its first win over bigger, larger western competition, when it bagged a $8-million (Rs 32-crore) deal ahead of Cambridge Technology Partners, for an unspecified client. “Phaneesh is one of the best salesmen in the business and also extremely good at piecing together contracts,” says T.G. “Tiger” Ramesh, founder of Cicada Resorts, where Murthy is an investor. Prior to this venture, Ramesh and Murthy started Quintant, a business services provisioning company. “He has the ability to identify talent early and work with teams and grow a business,” says Ramesh, who briefly headed iGate’s BPO arm.

Not everyone, however, is fully convinced about Murthy’s plans. “iGate Corp (the parent company) yet has a $100-million (Rs 400 crore) staffing business in Mastech; iGate Global continues to suffer from its shadow,” says one IT analyst.

N. Ramachandran
However, Murthy clearly has his guns trained on this business and perhaps on the CEO’s chair of the parent company itself. “We are closely examining the value of this business (Mastech), since it doesn’t sync with what we do at iGate Global,” he says.

Then, there’s the issue of scale. As a $200 million-plus (Rs 800-crore plus) company, iGate is very much a small, or, at best, a midcap player in a market where scale is becoming critical. Here, Murthy seems in two minds: “What is Tier-I or II? Compared to IBM and EDS, large Indian players are also mid-tier,” he argues, but quickly adds: “We want to have the margins of Tier-I players.” That will take some work. As one analyst points out: “iGate Global doesn’t have the advantages of scale offered by an Infosys or a Wipro and Murthy will need to prove he can actually win deals that will grow his margins.”

One alternative for him is private equity (PE) money that, besides the obvious monetary leverage, can give iGate a toehold in the investor’s portfolio of companies.

“This is definitely an option going forward,” says Ramachandran. At the same time, clearing up the capital structure will also give Murthy the option of using inorganic growth to gain scale. “This is a key requirement for us to boost our M&A plans,” he says.

Murthy’s critics point out that unlike other newer midcaps such as MindTree Consulting, iGate has little to show in terms of marquee customers or management. “Aside from the GE account it has had since its staffing days, iGate has few large deals to boast of or clear strengths in verticals or technology. Phaneesh will need to build these capabilities,” says an analyst.

Murthy personally has little experience of running a $1 billion-plus (Rs 4,000-crore plus) entity, but plenty in building smaller companies and taking them up to the midtier level. Then, several of Murthy’s original A-team have left for greener pastures. They include Jessie Paul, Tiger Ramesh, Anu Sharma and most recently, Mohan Sekar.

Murthy has been quick to bring in replacements, hiring Narayan, for instance, from Cognizant Technology Solutions to fill the void. “iGate can be a game changer in the industry; it has been a learning process over the last one year,” says Narayan. However, despite its relative lack of size and branding, iGate continues to be a sought-after employer in the industry, giving employees more visibility with clients and also the rarely-offered stock options as an employment reward.

Sean Narayan
Finally, the biggest stumbling block to iGate’s and Murthy’s plans may be the market itself. While Indian rival Wipro made a dozen or more acquisitions, MNC giants like IBM and Capgemini have been aggressively looking for inorganic growth to expand their presence here. “An India presence is no longer merely an option for these companies— it’s a business essential and wellrun mid-tier companies are ideal targets,” says Sid Pai, Partner at TPI, an outsourcing advisory firm.

After delisting, Cicada’s Ramesh says, a possible option will be for iGate’s promoters—Ashok Trivedi and Sunil Wadhwani—who own around 60 per cent of the parent company’s stock, to sell out, possibly to a private equity giant or tech MNC. Wadhwani hints at such a possibility with regard to the staffing business at least. “We will consider the future of our staffing business, Mastech, including divesting the business, but we don’t plan to raise PE funds in the near future,” he says.

“Four or five years ago, we had no physical infrastructure and were best known as an Indian staffing company. I think we’ve successfully made the transition and are poised to transform the IT industry,” says Murthy. He has already been at the centre of one transition. Only time will tell if he can pilot this one successfully, too.

Internet advertising is all set to explode in India