SMART MOVE: Anita Dongre has not only made designer clothes accessible to the middle class, but has helped traditional artisans regain respectability

Twenty five years ago, Anita Dongre started out small, with two sewing machines. Today, she is one of India's foremost fashion designers who has been immensely successful in doing what she had set out to do - making designer clothes accessible to the middle class. The company's brands - And line of chic, contemporary western wear for women, Global Desi for a young, vibrant look, and luxury line Anita Dongre for bridal wear, occasion wear, pret and menswear - are available at over 700 outlets. In 2014/15, it earned a revenue of Rs 324 crore, 50 per cent more than in 2013/15. Profit after tax grew 61 per cent to Rs 34.5 crore. It is reportedly aiming for a Rs 700 crore top line in 2016/17.

The company went global in 2013 when it opened a Global Desi store in Mauritius. In 2013, General Atlantic acquired a stake in the company, which in 2015 was named as House of Anita Dongre from And Designs India. In August 2015, she launched Grassroot, an initiative to back traditional artisans. "I always wanted to do something with traditional Indian crafts, which are so real, earthy and rich. I wanted to restore the handicraft and heirloom tradition of India." She says among all her creations, Grassroot is the closest to her heart. Photo: Rachit Goswami
Three years ago, when Arundhati Bhattacharya took over as the first woman chairperson of State Bank of India, she spelt out some strategic goals - taming asset quality deterioration, improving risk management framework, checking costs, improving delivery standards and non-interest income, and leveraging technology. She has made significant progress on all parameters except asset quality, where the clean-up is still on. She is now in the midst of another challenge - SBI's merger with five associate banks, which have 5 per cent market share in deposits and advances. This could be a test case for larger consolidation in the PSB space. "I do not know whether ours is a test case, but I do know that the government is keen to create a few large banks, which is the right thing to do," says Bhattacharya.

SMART MOVE: Competition Law practice is the only Band I practice in India rated by Chambers & Partners Photo: Shekhar Ghosh
From being the 'Queen of the Courts' to being at the helm of Shardul Amarchand Mangaldas, Pallavi Shroff's ascent in the world of law has been phenomenal. The Competition Law practice, a practice mentored by her, is the only Band I practice in India rated by Chambers & Partners. Her successful representation of Nestle in the Bombay High Court and getting the ban on Maggi noodles lifted is also noteworthy, besides successfully representing Coal India before the Competition Appellate Tribunal. 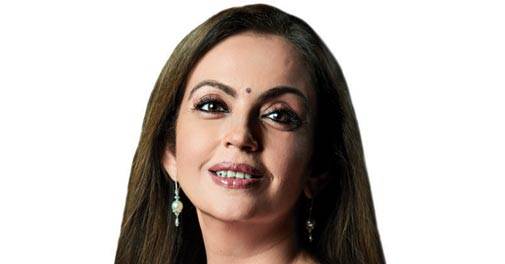 Photo: Rachit Goswami
Reliance Industries Director Nita Ambani's tour de force lies in the detail, but her hands-on approach does not involve telling members of the 'Reliance family' what to do or how to do it. Instead, she encourages them to be aware of the challenges and empowers them to come up with the best possible solutions. She has been engaged in several initiatives that have strengthened RIL, but what, perhaps, defines her best is her relentless effort in driving its corporate social responsibility initiatives to new heights, and help run a business empire as the second most powerful individual after her husband, Mukesh Ambani. What's more, she is also the first Indian woman member of International Olympic Committee. Photo: Rachit Goswami
Priya Nair began her innings with Hindustan Unilever in 1995 as a management trainee and has risen through the ranks to become Executive Director (Home Care Division). She has been a part of different divisions, including Consumer Insights, Customer Development and Marketing, and has also worked across various brands such as Dove, Axe, Rexona, Closeup and Pepsodent. As VP Laundry, Nair led the entire detergents portfolio and not only helped increase market share in the category but also penetrated emerging segments such as fabric conditioners and liquids. She has proved to be a good learner and has consistently delivered the goods for the company.

SMART MOVE: Repositioning VIP as a lifestyle brand with a focus on youth has been Radhika Piramal's forte Photo: Rachit Goswami
Radhika Piramal has been busy giving a makeover to family-owned VIP Industries - repositioning it as a youth brand , introducing hip and fashionable luggage, backpacks, gym bags and duffle bags, and relaunching India's first strolley brand, Skybag. Since she took over the reins of the company as Managing Director in 2010, VIP has posted impressive financial results. In 2015/16, the company's total income grew by 16 per cent to Rs 1,216 crore while its profit after tax surged over 32 per cent to Rs 63 crore. The stock has gained over 25 per cent in the past one year. However, the tough competition from foreign players, such as Samsonite and Delsey, will keep her busy for a while. Photo: Rachit Goswami
Shanti Ekambaram, President, Consumer Banking at Kotak Mahindra Bank, has launched several digital products such as multi-lingual banking app, alpha saving accounts and apps for transfer of money through social media, since she took charge in 2014. Under her, the bank's consumer assets grew from Rs 21,113 crore in March 2015 to Rs 32,987 crore in March 2016, while loans grew 28.3 per cent. But her biggest challenge, perhaps, is the bank's retail push - a segment that has seen huge growth of late, and a business where technology is key. This is where Ekambaram is trying to make a mark. Photo: Nilotpal Baruah
Suneeta Reddy took over the reins at Apollo Hospitals in June 2014. Since then, the healthcare service provider has been on a growth and expansion spree. Apollo Hospitals Enterprise's total income increased from Rs 5,215.2 crore to Rs 6,112.28 crore in 2015/16 and PAT grew to Rs 316.15 crore. To strengthen its presence across India, it acquired a majority stake in Rajashree Hospitals of Indore, and in Guwahati-based Assam Hospitals, besides buying Bangalore-based Nova Specialties Hospitals. She led the Apollo Reach Hospitals model to take healthcare to villages, and has been a member of the Harvard Business School India Advisory Board.

SMART MOVE: Tanya Dubash's sharp marketing mind and her capability to revive a brand are exemplary Photo: Vivan Mehra
Godrej was already a household name, with customers cutting across generations identifying themselves with the soaps and locks, personal care products and household appliances, when Tanya Dubash, the eldest daughter of Adi Godrej, took charge. But she was the first one to notice the early signs of a brand losing its lustre. Dubash wasted no time and took up a rebranding exercise, called Godrej Masterbrand Strategy. With the help of a UKbased brand valuation company, Interbrand, she created a strong brand franchise focused on building cutting-edge products and changing the retail strategy. Alongside, she also worked on attracting talent to further strengthen the base. Dubash is targeting a $20-billion brand by 2020.
TweetYoutube
Tags: achievers | Anita Dongre | Arundhati Bhattacharya | Nita Ambani | Priya Nair