Just as Chinese silk invaded the Indian market in the 1990s, China's power equipment manufacturers, leveraging their lower costs and shorter delivery periods, have begun hitting Indian majors where it hurts most—and are walking away with orders worth thousands of crores of rupees. K.R. Balasubramanyam says that they are making hay while the sun shines.

When the lanco Group took over a 1,015-MW thermal power project in Karnataka from Nagarjuna Power in 2006, the first thing it did was terminate the existing Rs 2,500-crore engineering, procurement & construction (EPC) contract with the public sector Bharat Heavy Electricals (BHEL). It then gave the EPC contract to group company Lanco Infratech, which invited bids for the project’s guts—the boiler, turbine and generator (BTG). Even as a miffed BHEL stayed away, China’s Dongfang Electric Corporation won the order for Rs 1,800 crore. 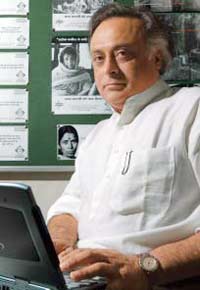 Jairam Ramesh
Just as Chinese silk invaded the Indian market in the 1990s, China’s power equipment manufacturers, leveraging their lower costs and shorter delivery periods, have begun hitting Indian majors like BHEL where it hurts most—and are walking away with orders worth thousands of crores of rupees. They are simply making hay while the sun shines—India’s plans to add 90,000 MW during the 11th Five-Year Plan ending March 31, 2012, have electrified investors and manufacturers alike.

Private developers focussed on profits were the first to catch the China fever, but government-owned utilities weren’t too far behind— West Bengal and Haryana already have plants powered by Chinese equipment. This has begun to hurt BHEL. While Chinese companies have bagged contracts for an estimated 18,000-20,000 MW of equip-ment to be supplied over the next 8-10 years, BHEL’s market share actually fell by a little over a percentage point to 63.68 per cent in 2007-08.

So, why are Indian promoters rooting for Chinese manufacturers? After all, barring the odd case, few complain about the quality of BHEL’s equipment. But its delivery record is the culprit. Always patchy, the spurt in demand over the past few years caught it unawares—it had actually cut many jobs in 1999 and 2000 when demand was slack. Today, its production lines are stretched and it often ends up paying huge penalties for delays, while the Chinese companies invariably deliver on time.

Chinese equipment is attractive for another reason, as well. Project promoters can make huge savings right at the start. A report last year by CLSA, a brokerage firm, noted that Chinese equipment reduces capital costs per MW by as much as 30 per cent.

“The Chinese have an edge in costs and speed, while BHEL is limited by capacity constraints. Given regulatory pressures to keep tariffs low, I cannot see Indian power producers having any option but to go to China,’’ says S.L. Rao, who was the first chairman of the Central Electricity Regulatory Commission (CERC).

Click here to Enlarge
Scurrying for cover
Sections of the UPA government are out to dampen the China craze. “We don’t want independent power producers (IPPs) to serve as a window for (Chinese) imports,’’ Jairam Ramesh, Minister of State for Power, has been quoted as saying. The Power Ministry has moved the Prime Minister’s Office about the need for a policy that allows only local manufacturers—including the Indian arms of foreign majors—to bid for projects. The ministry has also proposed that the government give domestic coal linkages only to projects being built with equipment made in India.

According to one estimate, by McKinsey & Co., India needs 315-335 GW (1 GW=1,000 MW) by 2017 if it has to grow at 8 per cent over the next 10 years. In this background, the market for power equipment has become very lucrative and there’s a lot of action taking place. BHEL has tied up with France’s Alstom to make supercritical boilers, while Larsen & Toubro has partnered with Mitsubishi Heavy Industries to manufacture BTG. Reliance Power, which is developing 13 power projects with a combined installed capacity of 28,200 MW, has roped in Shanghai Electric Corporation to manufacture BTG equipment. Shanghai Electric and Dongfang Electric did not respond to questions e-mailed to them for this story.

R.S. Sharma
Performance audit
Some in the government feel that Chinese equipment does not deliver optimum results when fired with Indian coal. The concerns heightened after the collapse of turbine blades supplied by Dongfang to the 300 MW Sagardighi project of West Bengal Power Development Corporation. This prompted the apex power sector planning body, the Central Electricity Authority (CEA), to take up a technical audit of Chinese equipment and its report is expected soon. The entire power sector is waiting keenly for the findings.

The CLSA report, referred to earlier, highlights that although the capital cost of BHEL’s equipment is higher than those supplied by Chinese companies, they are more competitive over the lifecycle costs. A CLSA team that visited China found that NTPC plants built on BHEL equipment have far lower power tariffs than Chinese power stations. The reason: the Chinese plants have higher running costs (excluding fuel). Independent observers are also not ready to give a blanket approval to Chinese products, considering that there are good and bad manufacturers. Then, even if the best package is imported, a developer could face trouble integrating or customising it. V. Raghuraman, Principal Advisor to CII, notes that Indian manufacturing is quite mature and is capable of meeting the Chinese competition, so the threat perceptions are “grossly misplaced”. “China in due course will look to develop manufacturing facilities in India,” he says, adding: “BHEL will rejig its strategy and emerge stronger as a result of competition.”

Click here to Enlarge
Contract concerns
The biggest worry about Chinese companies is over the issue of enforcing contracts. Governmentowned agencies like the Rural Electrification Corporation (REC) and the Power Finance Corporation (PFC), which together account for two-thirds of the money lent to the sector, can recover their money only if the equipment performs and lasts. Both are said to be reluctant to fund projects that import equipment from China. In the event of a dispute over any performance guarantee, Chinese companies insist on arbitration in China, while European, American, Japanese and Russian firms are comfortable with arbitration in India. Private banks, on the other hand, are not worried about the source of the equipment: all they want is a performance record. Somak Ghosh, Group President, Corporate Finance & Development Banking, YES Bank, says: “We will definitely be cautious if it is a new supplier from China or any other country.’’ The bank has funded projects of the Adani Group, Jindal Group, GVK Power and Essar Power, among others.

K. Ravi Kumar, Chairman & Managing Director, BHEL
Projects can’t wait
Developers of large projects are interested only in performance—and schedules. “Anyone who meets our quality criterion is welcome. We are not averse to the Chinese at all. When we go for international competitive bidding, anyone can participate,’’ says R.S. Sharma, Chairman & Managing Director of India’s largest producer of power, NTPC, which has an installed capacity of 29,894 MW. M.V. Subba Rao, Director, GMR Energy, which has awarded the EPC contract for its 1,050 MW Kamalanga power station in Orissa to Shangdong Electric, does not doubt BHEL’s quality (“It is one of the best in the world”) but points out that it is overbooked, unable to deliver equipment on time and is costlier. “Power plants cannot wait,” Subba Rao says. On quality, he says: “Chinese equipment is not at all bad… We have to suitably modify it to work in Indian conditions.” The modifications will be superficial; the basic technology will remain intact.

Some developers have opted for Chinese suppliers simply to build units with supercritical equipment and to keep tariffs low. Reliance’s Sasan project, for instance, is committed to delivering power at Rs 1.20 per unit only because it will have supercritical boilers. BHEL, too, has stepped into the space and has won its first order for supercritical boilers (2x660 MW) from NTPC for Barh Stage II (UP) and has signed up with Tamil Nadu for its first 2x800 MW supercritical thermal power project.

It is also taking other measures to face the challenge. “We have taken several steps to compete with the Chinese. By December 2009, our annual manufacturing capacity will reach 15,000 MW and we are introducing new-rating thermal sets such as 270 MW, 525 MW, 600 MW, etc.,” says K. Ravi Kumar, Chairman & Managing Director, BHEL. In response to the rising demand for equipment, manufacturing capacity will be further raised to 20,000 MW by 2011, he adds.

Click here to Enlarge
Fears premature?
BHEL is fighting Chinese rivals by citing the performance record of its equipment. The government is yet to take a stand either way on the Chinese imports, but experts find its arguments untenable. Rao points out that China added 100,000 MW last year, while India created just 20,000 MW over the past five years. “If anyone believes that the Chinese are going to put their economy at risk with equipment that will not last for 25-30 years, they must think again,’’ he says. Although now an Independent Director on the board of Reliance Power, Rao clarifies that his views are those of an independent observer.

CII’s Raghuraman, too, reckons the fears are premature. “The performance (of Chinese equipment) can be evaluated only over time,’’ he says, adding that India will take at least three-to-five years to ramp up domestic capacities.

Meanwhile, competitive quotes by the Chinese will spur Indian manufacturers like BHEL to tweak their productivity and be in a position to become global vendors. “BHEL’s market share will depend on its ability to expand and offer state-of-art technology solutions,” CII’s Raghuraman says.

Analysts like Hiranyava Bhadra, Associate Director of KPMG India, which has done extensive work on the subject, echoes him, saying that generalisations can be dangerous. “Such views can never be taken at a country level; to take a view that any supply from that country (China) is of poor quality will send out a wrong signal,” says Bhadra. Very few issues in the recent past have thrown up views as divergent as the ones over Chinese power equipment. The coming years will determine whether Indian manufacturing will stand up to Chinese competition and protect/expand its market share in global business or simply give up.