Software product firms, understandably, do take a while to turn profitable, but for the Chennai-based ERP vendor Ramco Systems the gestation period has been rather too long. This doesn't perturb MD and CEO P.R. Venketrama Raja, who armed with new products is determined to take his company forward and emerge successful. Nitya Varadarajan spells out the plans that Raja has up his sleeve. A report.

Infinity’, Ramco Systems’ impressive new logo, is difficult to miss as one enters the company’s corporate office on Chennai’s Sardar Patel Road near the IT corridor. For the promoter P.R. Venketrama Raja, it signifies the infinite potential his company and its products have. But for shareholders, it ironically represents the infinite patience they have kept so far as they wait for one of India’s earliest IT product companies in the highly competitive Enterprise Resource Planning (ERP) space to turn profitable.

Vice Chairman, MD & CEO P.R. Venketrama Raja: Determined to take Ramco forward
In its eight long years as an independent listed entity (it was initially a division of Madras Cements and then demerged in March 2000), Ramco has been piling up losses. By 2004-05, it had accumulated losses worth Rs 297.62 crore. That year, the company chose to set off the losses against the share premium account in a bid to make its balance sheet a bit more reassuring for prospective customers. That did not help, as the losses returned and as of last year (2007-08) accumulated losses stood at Rs 49.23 crore.

Though on paper Ramco posted a marginal net profit of Rs 10.49 crore in 2007-08, a closer look at the figure reveals that this was possible only on account of an extraordinary income (profit from sale of its headquarters). Its loss, otherwise, would have been higher at Rs 58 crore.

The company has been surviving through periodic infusion of funds by way of preferential and rights issues to raise Rs 336 crore so far (see The Lifeline) to fund its losses. It also sold its corporate office recently to Madras Cements, a group company, to garner Rs 90 crore and has announced plans for yet another rights issue—its third in eight years. Software product companies, understandably, do take a while to turn profitable. But for Ramco, the gestation period has exceeded well over a decade and more. Can it really turn around?

Raja, though, is upbeat and comes across as an entrepreneur determined to take his company forward and emerge successful. “What we have today is a different class of products and services. It is only a matter of time before big customers and profits come our way. We need to persist and move forward without making any errors,” he says. The product that Raja is talking of is Ramco’s VirtualWorks, which, according to him, could sit with ease on just any business process and is very flexible. If he is to be believed, it is far more efficient than those offered by existing ERP majors (read SAP & Oracle). Traditional ERP, Raja says, only covered those business processes that it could easily automate. 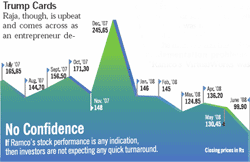 Click here to Enlarge
There was always a subset of business processes that were not included in the ERP and these had a different set of software. Human intervention was needed to correlate the independent processes with the main ERP and this led to implementation problems. “Ramco’s VirtualWorks was designed from start to overcome this handicap,” he explains. Besides, Ramco’s product is apparently “well liked” by organisations with rapidly changing business models that desire flexibility in their ERP system. “One size does not fit all, and our business platform allows users to create the services they need,” contends Raja. Ramco has more than 400 clients, including Texas Instruments, Moser Baer, City of Durban, HDFC Bank, DLF, Swatch group, and Philips Medical Systems. Says Jayant Bhattacharya, an analyst with the multinational ARC Advisory Group that specialises in manufacturing research, marketing and consultancy: “Ramco’s ERP has been more successful than those of others in this space in terms of extracting multi-layered information and data—for instance, in its product, you can find vendor linkages, logistic linkages, regulatory environment, apart from the manufacturing processes.

Besides, it is the only one today that can be executed simultaneously multi-site and multi-plant. All the others have to go location by location.” Adds Mahesh Mathur, Sr General Manager (IT), DLF, where Ramco’s VirtualWorks went live in May 2008 with barely a hiccup across its 69 locations. “There is no traditional ERP available to match our requirements, except Ramco’s.”

The service aspect that Raja referred to earlier is Ramco OnDemand ERP—a pioneering initiative that allows small and medium companies to subscribe to full-blown ERP platform without having to own it. They can simply pay monthly subscription charges of a few thousand rupees. “What we are telling SME companies is that forget about running your software, just run your business,” says Raja. Since its launch in February this year, Ramco’s OnDemand ERP has roped in 150 customers and on an average, three or four companies are signing up every week.

The ‘Software as a Service’ model is a very happening area and Ramco has made a timely entry, according to Balaka Baruah Aggarwal, Senior Manager (Emerging Services, APAC region), Springboard Research. “Even in India, SMEs are trying to tap into US-based NetSuite (which offers solutions through a similar model but does not offer full-fledged ERP) despite possible servicing issues. Ramco’s name is better known here and they have a pricing advantage,” she says.

Ramco’s CFO, K. Ramachandran, expects the OnDemand ERP to stem the losses. “This year, we hope to generate Rs 10-12 crore income only from this,” he says.

Simultaneously, the company has revised its marketing strategies to push its VirtualWorks in the global market. “We have tied up with various partners who will also help with implementation,” says Kamesh Ramamoorthy, Ramco’s Chief Operating Officer. Ramco is tying up with other technology partners where needed. “We used to write our own code for each and every requirement. Now, we are seeing where we can coexist seamlessly,” says Ramamoorthy.

Kamesh Ramamoorthy, COO, Ramco “Now, we are seeing where we can coexist seamlessly”
But the question that its investors have been asking is whether Ramco can finally propel itself into a new orbit. Frost & Sullivan’s Deputy Director for ICT Practice for South Asia and Middle East, Kaustubh Dhavse, feels that it has a good future if it maps its strategy well. “Ramco should target the SMEs and play the volumes game. If it is persistent and successful, it could become a big name in another 10 years,” Dhavse says. However, there are significant challenges in cracking the SME market (projected to be worth $45 million for on demand ERP by 2011). For one, companies are wary of sharing data. For another, SAP, the market leader, is set to launch its own on demand ERP late next year.

Then, there’s the global slowdown to worry about. In the mid-’90s, around the time Ramco readied to launch its ERP product, India embraced globalisation, which allowed players such as SAP and Baan to enter and sweep the market from under Ramco’s feet. This time around as Ramco readies itself once again with ‘path-breaking products’, global slowdown is staring it in the face. Will it be second time unlucky?

Where is Citibank headed?