The existing and the forgotten

New residential projects are being launched by real estate developers across the country even as existing ones are some distance from their scheduled completion.

Real estate developers may or may not have sighted green shoots but they are certainly citing that as the reason for the burst of new project launches in the residential segment. Of course, given the current rage, most of these are in the affordable segment—depending again on what one’s affordability quotient is—priced in the sub-Rs 40 lakh range. Developers, for their part, are promising possession within a two- to threeyear period from launch of construction—which, going by their recent record, may not inspire confidence.

“I don’t think most of the earlier projects which got delayed were due to non-absorption—most developers were over optimistic about their timelines for completion, not factoring in the delays in getting licences and clearances from local civic authorities,” observes Anuj Puri, Chairman and Country Head, Jones Lang LaSalle Meghraj (JLLM). That may be true. Omaxe's The Forest on Surajkund Road in Delhi-NCR was stuck due to issues related to mining clearances for a couple of years after its launch and the company has only now begun construction of these super-luxury apartments. There were, of course, additional factors at play, among them a lack of management bandwidth to successfully execute ambitious projects and restrictive cash flows as many developers had spread themselves too thin.

There is, however, some trepidation on Puri's part to issue a certificate of hunky-dory-times-are-back-again to the real estate sector. “The situation will only be clear by the next quarter and while there are early indications that the market has bottomed out, it certainly does not mean that developers can start increasing prices,” he cautions. Indeed, as the recent launches demonstrate, pricing remains a key factor in the absorption of real estate by end-users.

“Some of the projects which have been launched at prices lower than the prevailing market rate have seen very fast sell-outs,” points out Anshuman Magazine, Managing Director, C.B. Richard Ellis. A recent case in point was the DLF Capital Greens project on Shivaji Marg, New Delhi, where the sale price was kept 25 per cent lower than the prevailing market price—and the company does claim a complete sell-out. Which does imply that while the worst may be over for the realty sector, developers aren’t uncrossing their fingers yet as certain micro markets could still witness some correction in the months to come. 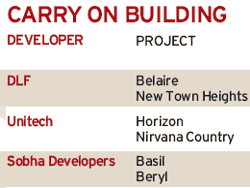 So is the recent slew of launches a diversionary tactic by developers to gloss over non-compliance with scheduled possession timelines of earlier much-hyped projects? Or is it a survival tactic to tap into a growing market segment and boost the cash flows, which can then partly offset the costs of construction of existing projects that have been delayed? Highly unlikely, says Magazine, as the financial institutions will not allow jugglery of money any more, especially in the real estate sector. Besides, developers today are operating in a far more competitive environment where buyers are vigorous in getting under the developers' skin for any inordinate delays in house possession and may stop paying the construction-linked installments.

Sure, developers offer a compensation of Rs 5 per square feet per month in case of any delay on their part in handing over possession but that’s small change compared to what prospective buyers pay for their apartments. Besides, many prospective buyers, wary (and weary) of taking recourse to legal action against the company, simply decide to pull out of the project and get their investment refunded.

Interestingly, the DLF spokesperson, while denying any of the company’s projects were running late, said government regulations exempt the developer from any penalty for delays of upto six months in delivery—a rule nobody yet appears to be aware of. “More than any government rule, I think buyers need to read the fine print of the sale agreement carefully to check if there are any such clauses in them,” advises Magazine. Even so, DLF had to slash prices in its Garden City project in Chennai after buyers banded together and flexed their muscle following a delay in the project's construction.

Also, as R. Nagaraju, Vice President, Corporate Planning and Strategy, Unitech, points out, the delays in projects scheduled for completion last year onwards were due to the extraordinary situation prevailing in the economy and developers are trying to expedite the construction of these projects.

“One must also realise that customers are also partially to blame as they did not make payments on time. We have currently over Rs 1,000 crore outstanding receivables from customers—some of whom were not disbursed even their sanctioned loans,” he adds.

In fact, many of Unitech’s residential projects are running late by as much as a year due to reasons emanating from the developer and the buyer side. And that’s best reflected in the state of its Grande project on the Noida Expressway in the National Capital Region (NCR), Here, the company has been forced to revise its plans for opting for mixed-use development and include nonpremium category accommodation.

For the record, a group residential housing project takes 2.5-3 years to complete. Which explains why buyers, probably wary of the developers’ promises of delivering within the stipulated time line given their recent record, are opting to put their money into the secondary market. This despite the offerings in the resale market coming at a much higher price tag than the launch prices of the new projects.

However, Magazine believes a majority of fresh sales in the residential segment are directly from the developer to the buyer. “There are obvious advantages of paying in installments as against coughing up a lumpsum, which is the case for secondary sales,” he avers. But for the buyers, it clearly seems to be a case of a bird in hand being better than one two years hence.

Picture of the future?