The time-bomb of foreign currency-denominated debt has been ticking for some time now and some of India’s best-known companies are at the doorstep of a default.

Rs 545 crore: the blob of debt the Mumbai-headquartered Wockhardt Ltd has to wipe out. Six months: The time it has to do that. Circa 2004: The year the pharma major’s current woes can be traced back to. Of course, the scenario didn’t look so gloomy then. When the company raised $110 million from the global markets five years ago by floating foreign currency convertible bonds (FCCBs), the management perhaps never thought it would have to repay it one day. Any FCCB issuer would hope its bonds would get converted into equity. But with its stock price today (as on May 6) quoting at just 18 per cent of the conversion price fixed then, the bond holders will be in no hurry to rush to Dalal Street. The nervous drug-maker, hit by Rs 139 crore losses for the year-ended December 2008, is desperately seeking out ways to rid itself of the FCCB albatross before it comes up for redemption in October this year.

A Wockhardt spokesperson says a clear picture on how the company would deal with the FCCB payout will emerge once the corporate debt restructuring (CDR) taken up by a clutch of banks is through. Wockhardt isn’t the only Indian company that’s been laid low by the FCCB time-bomb. A host of Indian companies, which range from pedigreed large-caps like Tata Motors, Videocon Industries and Suzlon Energy, to their lesser-known counterparts like Aksh Optifibre, Subex Ltd and Marksans Pharma, are staring down the FCCB barrel.

FCCBs are essentially foreign currency-denominated debt with a maturity period of three-to-five years. The investor has the option of converting the bond into equity. He would typically convert it into equity and sell it for a premium if the stock is trading above the conversion price, which is the price at which the bond is to be redeemed. In the eventuality of non-conversion, the bond has a coupon rate and a redemption premium. If the scrip is trading below conversion price, the investor would hold the bonds as a debt paper and go for redemption on maturity. Either way, the investment is protected. These bonds are freely traded in overseas markets and whether they are selling at a premium or discount depends on how the company’s scrip is doing on the Indian stock markets. The attraction of FCCBs is in the option of converting them into equity. Few are interested in debt in view of low returns. The company issuing such bonds, too, prefers conversion to redemption. Things on the FCCB front were hunky dory as long as markets were riding high. But after stock prices began tumbling last year, the Street is littered with reports from brokerage houses and rating agencies on the potential risk FCCBs pose to Indian corporates and their profits. Experts are not ruling out cases of defaults by some companies in spite of some recovery of Indian bonds in overseas markets. “Of course, there will be defaults. If a bond is trading at a high discount, say close to 50 per cent, that indicates a higher chance of default,” says Raj Bhatt, Chairman & CEO of the London-based Elara Capital Plc. Market analysts say that there are about 138 companies where the bonds are trading below their face value, many at a high discount. Wockhardt’s FCCBs, with a face value of $100 (around Rs 5,000 at current rates), traded at $39.53 (Rs 1,976) in Hong Kong on April 10, according to Bloomberg data. “I believe the FCCB is a time-bomb which is ticking and if market conditions remain subdued for the next two years, companies will find it difficult to meet liabilities arising out of redemption,’’ says Sameer Panke, Analyst with Dolat Capital, a Mumbai-based brokerage house. Click here to Enlarge
According to a latest CRISIL study on CNX500 and BSE500 companies that have issued FCCBs, the net worth of these companies would decline by 17 per cent and profits by 11 per cent on redemption because they will need to raise an equivalent amount of debt. “The redemption of cumulative outstanding FCCBs of CNX500 and BSE500 companies is expected to touch Rs 32,000 crore by 2012,” says Sridhar C., Head, CRISIL Research.

As these FCCBs were at very low coupon rates, replacing them with bank debt means an increase in annual interest cost for companies, which in turn will impact profits. The redemption premium will hit their net worth, too. 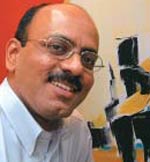 Subash Menon, Chairman & CEO, Subex
Subex’s is a typical case of distress. The telecom software firm raised $180 million (Rs 900 crore at current rates) in March 2007 to fund its acquisition of Canadian firm Syndesis. The conversion price was set at Rs 656 apiece. But on May 4, the stock closed at Rs 29.45 on the BSE. So, its bonds will likely come up for redemption. Subex Founder-Chairman & CEO Subash Menon says: “We are not acting on it now and have taken a waitand-watch position.’’Indeed, there may still be some hope on the horizon of this sea of calamity. The brightest is the buyback window the Reserve Bank of India (RBI) has opened. The central bank now allows Indian companies to buy back bonds of up to $100 million (Rs 500 crore) from their internal accruals. How much worth of bonds they can buy depends on how big a discount they can manage. To be able to buy back bonds worth $ 75-100 million (Rs 375-500 crore), a company should get a discount of a minimum 50 per cent. To the relief of companies, most bondholders are keen to dispose of the FCCBs of Indian companies at a discount.

Many bonds, issued during the boom period of 2003 to 2007, are trading at discounts as high as 50 to 60 per cent. By buying them at a discount, Indian companies can earn twin benefits of making a gain by paying off a foreign loan at a discount and not having to carry the mark-to-market losses for the redeemed FCCBs. In addition, they also save on redemption premium payable on maturity. 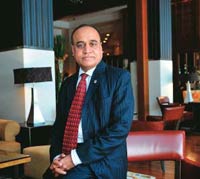 V.L.Ganesh, Director (Finance) & CFO, Hotel Leela Venture
The Reserve Bank had, as of April 15, cleared proposals from 18 companies for buybacks worth $765 million (Rs 3,825 crore) with discounts ranging from 25 to 50 per cent. The buyback amount, however, is a trifle compared to $19 billion (about Rs 95,000 crore) worth of bonds the companies have issued, most of which will come up for redemption in 2011 and 2012.

Way to go
In the prevailing hostile climate, do Indian companies have a strategy to surviving the FCCB juggernaut with minimal damage? A section of chief financial officers is betting on a stock market comeback. Some companies like Reliance Communications, Hotel Leela Venture, Jubilant Organosys, to name just three, have bought back a part of their FCCBs at huge discounts and lightened their balance sheets.

Hotel Leela Venture, for instance, has bought back onefourth of its euro outstanding due for expiry in September 2010 and one third of its dollar bonds set for expiry in 2012. “Both euro and dollar put together, we have bought back bonds worth $50 million (Rs 250 crore). We will see how things shape up and decide on further buybacks of our euro issue. As for our dollar issue, we still have a lot of time and will decide according to the situation,” says V.L. Ganesh, Director, Finance, & CFO, Hotel Leela Venture.

Sridhar C., Head, CRISIL Research
A majority of companies, the CRISIL study notes, will go for redemption as they would not have sufficient cash for buyback and these bonds are thinly traded. But that’s easier said than done if the climate does not improve. “Most FCCBs were raised when the rupee was 35/36 to a dollar and if it has to be redeemed when the rupee is Rs 50, that’s a huge challenge,’’ says K. Ramakrishnan, Executive Director and Head, Investment Banking, Spark Capital Advisors.

Price resetting is an option, and according to CRISIL’s Sridhar, “Only those companies that cannot raise debt from the market may opt for resetting of prices.’’ If the payouts develop into a crisis, there could be other options. Bhatt of Elara Capital thinks some companies may issue new bonds in exchange of old ones on new terms.

“Investors may find this far more acceptable than fighting court cases in India. This is a new territory for everyone. Eventually these bonds will get restructured as no one wants court cases.” In fact, Suzlon Energy’s latest attempts to issue fresh bonds on new terms for its $200 million tranche issued in October 2007 were overturned by bondholders.

When the BSE Sensex soared by 731 points—a seven-month high— on May 4 to polevault into 12,000 territory, many promoters in the line of the FCCB fire may have sensed a turnaround. But it will take many more such bouts of no-holds-barred bullishness—for which few fundamental triggers exist—to transform their despair into hopefulness.