As Flight IT001 approached London’s Heathrow airport, the cockpit of the Kingfisher Airbus A330 got a little crowded—with the airline’s Chairman, Vijay Mallya, and his son Sidhartha taking the jump seats as the aircraft approached the runway. As the plane’s wheels gently touched the runway, Mallya reportedly broke into a huge smile that signified the fulfilment of an ambition he had nursed ever since he started his airline three years ago. But the journey for Kingfisher’s international dream has been anything but smooth. 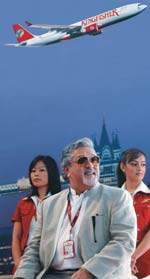 Kingfisher’s Mallya: Taking his aviation venture to new heights
Despite his best efforts, Mallya couldn’t get the rules for international travel by Indian carriers changed; only airlines with five years experience are allowed to fly abroad. Though he had Civil Aviation Minister Praful Patel batting for him, vehement opposition from Cabinet members, including Railway Minister Laloo Yadav— that was surprising, indeed—effectively stonewalled any change.

Mallya, then, took the other route available to him: he went ahead and acquired the Captain G.R. Gopinath-promoted Air Deccan. While many analysts considered Mallya to be Gopinath’s White Knight—Deccan Aviation, the holding company for Air Deccan, was bleeding red ink—Mallya had his plans chalked out; he first changed the Deccan brand and has now completely killed it.

“When you give away your daughter in a marriage, she takes the husband’s name only,” was Mallya’s response to a BT query on the subject. To be fair, he was only quoting Gopinath, who backed the makeover and has reconciled to the demise of his low-cost carrier and to his own new role as non-executive Vice Chairman of the merged entity.

But flying international is fraught with risk, not least of all being vicious competition. While the Bangalore-London sector has limited competition— only British Airways flies the route—Mallya is keeping up his buoyant outlook. “Banglaore-London-Bangalore is selling at good yields,’’ says the Kingfisher chairman, who seems unfazed by the price war set off by British Airways on the Bangalore-London sector. “Its fare of Rs 9,990 is bit of an eyewash. BA probably has only two seats at that price,’’ he says, adding: “If you go back in history and time, and notice the way air travel was started, it was luxury all the way. There was a certain amount of style and luxury in air travel, which disappeared later. Kingfisher’s business model is bringing back that luxury and style. People will pay for luxury.’’

The lowest fare on Kingfisher Bangalore-London sector, inclusive of taxes, is Rs 20,930. Mallya is keeping up his aggressive launch schedule; while Bangalore saw the first international flight on September 3, the next three international services will be launched out of Mumbai (Mumbai-London flights will start on October 26). Flights to Singapore, London Heathrow and Hong Kong from Mumbai are expected to start in October as well. However, Mallya’s most ambitious service, the Bangalore-San Fransisco flight on A 345 aircraft, is scheduled to start operations in October or November.

When Kingfisher begins a 17-hour non-stop flight between Bangalore and San Francisco, it will take on a gaggle of European carriers that make a killing on that sector.

However, things are not that smooth even for Kingfisher. The airline has put off taking delivery of some of its wide-bodied aircraft, and even sold two A340-500 aircraft scheduled for delivery soon to an African carrier. Yet, as rival Jet Airways admits, international sectors are relatively more profitable compared to the cut-throat domestic market. Mallya’s re-branding of Deccan to “Kingfisher Red” is expected to lead to higher yields from passengers. 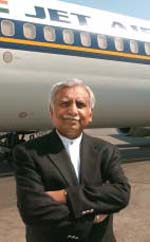 Jet Airways’ Naresh Goyal: Huge headstart over Kingfisher in the international sector
Then, the airline has to contend with what Mallya calls “steep state taxes” that are breaking the back of the aviation industry in India. On the one hand, state-run oil companies are selling ATF (aviation turbine fuel) at prices higher than their export price. On the other hand, Karnataka and Maharashtra governments have imposed high taxes on ATF. “Maharashtra wants connectivity as well as a 32 per cent tax on fuel. When oil was $40 per barrel, it collected 32 per cent; when oil prices rose to $140, it still wants 32 per cent. Governments cannot profiteer like this. In Karnataka, also, reduction in taxes will stimulate the new Bangalore International Airport,” says Mallya.

A full-service carrier like Kingfisher, which is based on America’s Jet Blue airline business model, will take 5-7 years to break even. The Jet Blue model essentially provides high quality inflight services using new and efficient aircraft, and at the same time, incorporates core savings elements of the low-cost business model. “Kingfisher is a very focussed player. Mallya knows his breakeven is long term play and he is a determined player. This is the kind of focus that airlines need today,’’ says Mark Martin, Senior Advisor at audit firm KPMG India.

When one enters the international market, one requires caution with regard to pricing strategies and risk as competition on international routes is very aggressive. But Mallya is taking no chances. Kingfisher and Deccan had an aggressive delivery schedule for narrow-bodied A320 family aircraft in 2008 and 2009. Those plans have been put on hold. The airline will now take delivery of only 16 of the smaller planes over these two years instead of 48 as planned earlier, deferring the remaining orders till 2012. By keeping it lean, Mallya is getting Kingfisher ready for a mean battle ahead.

The buzzword is affordability