It is a tournament that has put India on the global tennis map. It has seen tennis greats such as Boris Becker, Rafael Nadal and Carlos Moya in action. And it has been held continuously for 16 years in a city which is home to India's most successful tennis players - the Amritrajs, the Krishnans and Leander Paes. It could well be history soon.

The Chennai Open is South Asia's only tournament conducted by the Association of Tennis Professionals (ATP), a global body of tennis players. The event actually began in Delhi in 1996, when it was called the McDowell Open, but was moved to Chennai the following year. For its 2013 edition, which began on December 31 and ends on January 6, and is being held as before at the Sports Development Authority of Tamil Nadu's (SDAT) tennis stadium, the tournament boasts of an impressive line-up, which includes four of the world's top 20 players and 18 of the top 100. But lack of sponsorships has now raised the possibility of the event moving out of India next year. 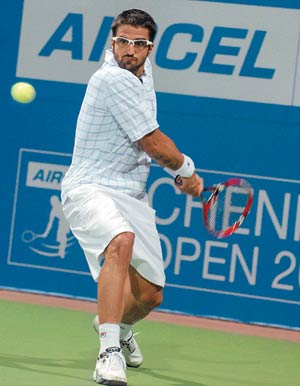 Janko Tipsarevic (World No. 9) at the Chennai Open in 2010. He will play again this year for a fifth time.
The contract between the tournament organiser Tamil Nadu Tennis Association (TNTA) and IMGReliance, a joint venture of global sports consultancy IMG and Reliance Industries, to host the event, expires after the 2013 edition. TNTA, which has over the years struggled to tie up funding, needs to give a clear commitment to IMG that it has the necessary finances to organise the event for the next five years.

The first blow came when the telecommunications company Aircel, the current title sponsor, decided to end its association with the tournament from next year. Then came news reports that China and Turkey had shown interest in hosting the event.

"ATP tournaments are premium properties and there are only a limited number of them. Whichever country offers better facilities and financial commitments, the tournament can go there," says Ashu Jindal, Chief Operating Officer, IMG-Reliance. "These events keep moving around." Jindal says discussions are on with TNTA to retain the tournament in the southern port city. But that will hinge on sponsors. Sponsorship is critical as it brings in the bulk of the funds to hold the tournament.

How much does it cost to hold the event? The Chennai Open's total annual budget is Rs 12 crore. To put things in perspective, that is less than the amount some of India's top cricketers earn annually. The title sponsor alone brings in Rs 5 crore, or 42 per cent of the total amount, while other sponsors, the state government, and paltry ticket collections make up the rest.

"Companies which have come forward to sponsor the event seem to suffer fatigue after a few years and back out," says C.B.N. Reddy, Honorary Secretary, TNTA. ITC was the title sponsor from 1997 to 2001. The tournament was then called Gold Flake Open. When ATP rules did not permit sponsorship by cigarette companies, ITC pulled out. The Tata group then became the title sponsor but stayed only for two years.

From 2005 to 2009, the tournament was co-sponsored by the Tamil Nadu government. Aircel became the title sponsor in 2010. "At current title sponsorship rates we are not realising much value," says Renuka Jaypal, National Head-Brand, Aircel Cellular, explaining the decision to pull out of the tournament. Organisers are trying to restart negotiations with Aircel. "We may reconsider only if the rates are made more reasonable," she says.

"Sponsors typically relate returns they get from sponsoring this event to cricket. That is an unfair comparison," says Karti P. Chidambaram, Chairman of the tournament's organising committee.

IMG's Jindal dismisses any suggestion that the tournament does not deliver value to the sponsors. "If that was the case Volvo would not be with us for five years and Fedex for three years. Also, for the 2013 edition, two super-premium products - Rado as official time keeper and Marks & Spencer as official fashion partner - would not have come on board," he says.

Broadcasters, however, find it difficult to rope in enough advertisers. Unlike other international events, the Chennai Open does not earn any income from telecast rights. "Ideally, an event of this nature should get Rs 2 crore by way of telecast rights. But in reality we pay for production and telecast," says Reddy.

Also, the gate collection is just Rs 50 lakh and any increase in ticket prices could turn away the fans. "We charge for the entire tournament what similar events abroad charge for one day," says Chidambaram.

The Tamil Nadu government is naturally keen to retain the tournament in Chennai. It is planning to refurbish the SDAT stadium raising its standards to international levels so as to provide better facilities and experience to players, fans and sponsors. "We have also sought the government's help to nudge companies such as Hyundai, Ford, Samsung, BMW, Renault and others who have manufacturing facilities in the state to sponsor the event," says M.A. Alagappan, President, TNTA. "They are sponsoring tennis events elsewhere in the world."

The state government has also doubled its funding to Rs 2 crore for the event from this year but the additional money is just enough to take care of the effect of rupee depreciation as prize money, appearance fees and ATP fees are paid in dollars.

A strong player line-up is critical for sustaining interest, and here the Chennai Open is at a disadvantage as two other tournaments - the Qatar Open and the Brisbane International - are held at the same time. The Qatar Open, backed by the Gulf country's government, offers prize money of $1.05 million. It also pays up to half a million dollars as appearance fee to the top four players alone. Not surprising then that Nadal opens his season this year in Qatar. Milos Raonic, who won the Chennai Open last year, has this year opted for Brisbane, which is also the best event for a player to acclimatize himself for the Australian Open that begins in mid-January.

The Chennai Open's organisers, for their part, have ensured that the tournament is seen as ideal preparation for the Australian Open. They have chosen the same hard court and ball that is used down under. This has helped, and for the 2013 edition, the world number six Tomas Berdych and ninth-ranked Janko Tipsarevic will be in attendance. Marin Cilic, a two-time Chennai Open singles champion who is currently ranked 15th in the world, and 2011 winner Stanislas Wawrinka, ranked 17th, will also be seen in action this year.

"Such player interest proves that players see value in the Chennai Open. This gives us confidence that the event will stay in Chennai," says Chidambaram. IMG-Reliance and state government officials echo this sentiment. All they need to do now is get some companies to open up their purse strings.

How messaging apps are edging out SMS