Auto-aggregator Jugnoo is now on a steady ride. 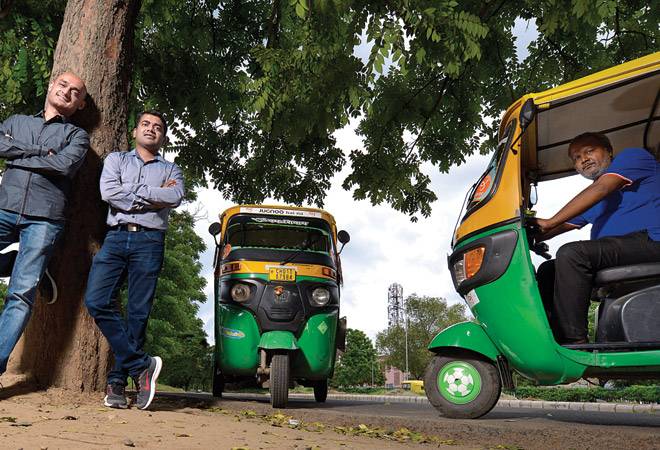 Chaterpal arrives in an autorickshaw decked with yellow and red garlands. He is lean with spiked hair and wears military fatigue trousers and a tee. His mobile phone is synced with three loud speakers at the back. Today, he isn't playing any music.

This writer found Chaterpal through Jugnoo, an autorickshaw aggregation app, and is taking a ride from Film City to Sector 137 in Noida, a distance of more than 10 km. Chaterpal lives in Ghaziabad and has two brothers and three uncles, who are also autorickshaw drivers "attached" to Jugnoo. "I get 20-25 rides a day through the app," he says. Jugnoo keeps a 10 per cent commission per ride. "I do not make much money but I am always busy. I don't have to wait much between rides. I have peace of mind."

Jugnoo, the Chandigarh-based start-up that began autorickshaw aggregation in November 2014, has figured out ways to keep auto drivers engaged. Over the past two years, it has evolved into an on-demand hyper-local transport and logistics company - when drivers are not transporting people, they are delivering meals from restaurants to homes and offices. The value created in organising an unorganised sector has been supplemented by an effort to increase capacity utilisation of vehicles on the street. According to the company, there are five million autorickshaws in India whose combined annual turnover is close to $26 billion. Their utilisation, however, is a meagre 30 per cent.

Jugnoo's investors, which include Paytm, Snow Leopard Ventures and Rocketship VC, have figured out this market's potential. The start-up has raised $16 million so far and has been able to aggregate about 50,000 autorickshaws in 30 cities. About 15,000 are "weekly active". It has five million customers and has done over 15 million rides. It is clocking an annualised revenue run rate of $10 million. A year ago, it was $4 million.

Of course, it has a giant of a rival in Ola - the taxi aggregator has over 1.5 lakh autorickshaws on its platform across 80 cities. According to sources, autorickshaws are a profitable category for Ola, unlike cabs, where there is more cash burn.

However, as Jugnoo is focussed only on autos, it has a weakness. An average consumer's phone will not have more than two mobility apps. He may prefer an app that offers all options - cabs, e-rickshaws and autos. And while the base price of an auto, `15 for 1.5-2 km, is lower than that of a cab's `40, discounting by cab aggregators can cannibalise the auto market. This writer paid `177 to Chaterpal for the ride from Film City to Sector 137 in Noida. The return journey, in Uber, cost `175.

When Uber entered the autorickshaw business in April 2015, Jugnoo founders, Samar Singla and Chinmay Agarwal, were petrified. "Shit man, what's going to happen?" Singla said at one point. "We said let's wait and watch. We just executed and nothing really happened. Growth slowed a bit," says Singla. Uber has shut down its autorickshaw business. Other aggregators such as mGaadi have fallen by the wayside - it was acquired by Yatra in mid-2016. But Jugnoo has survived. The jury of BT's Coolest Start-ups was impressed. "mGaadi had good traction both on the driver side and customer side. However, investors asked how are you going to compete with the money that has been raised (by Ola and Uber)? We thought the same would happen with Jugnoo, but the company survived. I like these guys for just giving Ola and Uber a fight. They grabbed the north India market before everybody else," a jury member commented.

Singla and Agarwal were together at IIT-Delhi's robotics club. Singla started a poultry feed company. Next, he co-founded a SaaS company, Click Labs, with Agarwal. It built on-demand applications, such as food delivery apps, for global customers. Jugnoo began as a "toy". Punjab Engineering College held a festival in 2014 and wanted a sponsorship from Click Labs. Agarwal built a "super crude app" that aggregated autorickshaws. The first day, there were 90 rides. More rides were requested the second day. "We started in Chandigarh and three-four months down the line reached about 1,000 transactions. We realised it was not a fad and there was something there. We raised the angel round of $1 million based on the team's credentials," says Singla.

A key differentiator was the focus on Tier-II cities. "These cities generate over two-thirds of the country's income and have been found to deliver growth opportunities. We believe our product will grow with these cities," says Singla. That's why you wouldn't hear much about Jugnoo if you live in a metro city.

"Tier-II does not have the same frequency and density of transactions as metros. So, we needed to be a bit more comprehensive. We started food delivery and B2B delivery. We now use autorickshaws and bikers for food delivery," says Singla. Jugnoo clocks 6,000 meal delivery transactions in a day.

The company closes down services that don't scale up and does it fast. Grocery delivery was one of them. The market wasn't ready. The core auto aggregation business, meanwhile, is also a wait-and-watch game. "That's the limitation of this business. We will have to wait for the market to catch up to our concept," says Singla. His problems, going ahead, will still remain executional

"It is a difficult thing to learn - how to build a company, the organisation structure, and how to run a company of 1,000 people," says Singla. "It is unnatural for us. We are all geeks and nerds."

"The Maggi episode was avoidable"