The Heavyweights: SUVs give tough fight to hatchbacks, sedans in Indian auto market Rural residents find it convenient for transporting agricultural material. Over the years, it has spawned cousins, too, the multi-purpose vehicle (MPV) and the crossover - the first providing seating height and space similar to an SUV but more of an extended van with three rows of seats and a two-wheel drive; and the second, expressly designed to marry an SUV with a passenger car.

Sales of SUVs and MPVs grew a staggering 30 per cent in 2016/17 over the previous year, while passenger cars rose 3.85 per cent and vans 2.37 per cent. SUV and MPV sales are growing eight times faster than those of cars and vans, including their newly introduced models. Crossovers, relatively new in India, are still establishing a foothold. SUVs and MPVs accounted for 25.54 per cent of total passenger vehicle sales in 2016/17, up from 21 per cent the previous year - which means one in every four cars sold is an SUV or MPV. A host of models have been launched in the past 18 months or so, and many more are in the offing - at least two dozen are expected to be unveiled at or before the next Auto Show in February 2018. "From mass market to luxury, I've counted 47 SUV models in India," says Gaurav Vangaal, Automotive Forecasting Professional, IHS Global Insight, which researches global economies. This is an epochal change in the value conscious Indian auto market where the small car has always reigned supreme. For decades, the only vehicle in the country even approaching an SUV was the Jeep, which Mahindra & Mahindra (M&M) imported in 'completely knocked down' (CKD) condition. In late 1985, for the first time, Maruti Suzuki brought in competition with Gypsy, which despite lacking a diesel variant and poor fuel efficiency, proved a hit in rural areas and with armed forces and police. This was followed by Tata Motors' repeated forays into this segment using its pick-up truck platform as the base - Tata Sierra in 1991, Tata Sumo in 1994 and Tata Safari in 1998, while M&M launched Bolero in 2000. But though moderately successful, all these early SUVs were much like the Jeep: hardy and reliable on dirt tracks and village roads but uncomfortable to ride in.

The early 'rustic' SUVs were hardly the kind that could be used for the daily urban office commute. The time was ripe for the introduction of MPVs, which began with Toyota's Qualis, launched in 2000, providing many of the advantages of an SUV alongside a comfortable drive. Within two years, M&M responded with Scorpio, a proper SUV, which had all the usual off-road strengths but was also good to ride in, promoting it as the "first urbane SUV" in the country. Not to be outdone, Toyota scrapped Qualis, replacing it with the sleeker and comfortable Innova in 2005, as easy to handle as a car, but with all the advantages of an MPV. (Indeed, Innova has remained the market leader among Indian SUV and MUV brands for the past 11 years.)

The evolution of both SUVs and MPVs has continued. While the early SUVs were built atop truck platforms, using truck construction methods and components, the later ones are monocoque - single body - greatly improving handling comfort and manoeuvrability. M&M, for instance, introduced Xylo in 2009 after modifying the Scorpio chassis and followed it up with the XUV in 2011, specifically intended to sell in global markets. By then Toyota had launched yet another mid-sized MUV, Fortuner, though at Rs 18.49 lakh in 2009 it was a tad expensive.

Affordability is crucial, but SUVs have scored here, too - many are priced lower than the sedans. Innova's cheapest variant, for instance, currently costs around Rs 14 lakh, while the sedan Corolla Altis costs Rs 16 lakh at its lowest. Not surprisingly, for the first time ever, SUVs are selling more than sedans. To bring down prices further, automakers came out with 'compact SUV's, with the cheapest variants marked below Rs 10 lakh and thus competing with hatchbacks. The big early success in this league was Renault's Duster, launched in 2012, though partner Nissan's Terrano did not do too badly either. The same year Maruti turned out Ertiga, the cheapest variant priced below Rs 6 lakh. A host of other compact SUVs have since invaded car showrooms - Maruti Suzuki's Vitara Brezza, Hyundai's Creta, Ford's Ecosport, Mahindra's TUV300 and NuvoSport, and all of them have done well. NISSAN KICKS, An international bestseller and compact SUV of the year TOYOTA CH-R, It is the company’s fi rst-ever compact SUV based on Toyota’s New Global Architecture 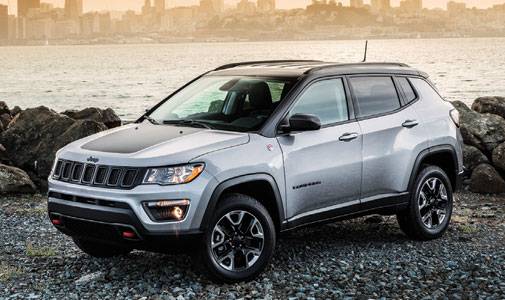 JEEP COMPASS, An India-centric car from the world’s best off -ro HONDA HR-V, The premium touch-and-feel SUV to fi ll the gap between BR-V and CR-V in India 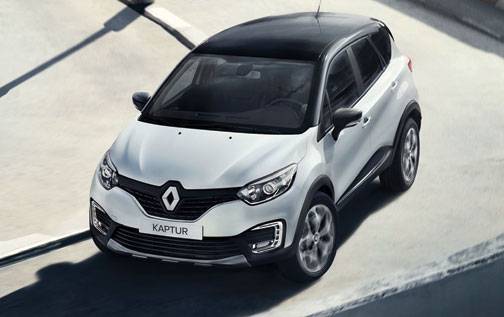 RENAULT KAPTUR, The French carmaker is getting some new arsenal after its hatchback Kwid

"We're witnessing a dynamic shift towards smaller SUVs," says P.N. Shah, CEO (Automotive Sector), Mahindra. In 2016 and 2017, the Indian Car of the Year (ICOTY) award for the best new car went to an SUV - Creta and Vitara Brezza, respectively. "SUVs contribute 12-14 per cent to our total sales, but we want to raise that to 30 per cent," says Young Key Koo, CEO and Managing Director, Hyundai India. "We hope the new compact model we are launching next year will enable us to do so."

With its Kwid HBC (distinct from the Kwid hatchback) to be launched later this year, Renault is going one notch lower into 'sub-compact SUV' territory, pricing it at Rs 4-5.5 lakh. "Duster helped us establish the Renault brand in India, so we decided to use the same concept in the mini segment," says Sumit Sawhney, MD, Renault India. "We'll have many more SUV-type products in coming years." The implementation of the uniform Goods and Services Tax later this year, which is likely to take away some concessions of small cars, will further level the playing field.

Thanks to its synchronised design and powertrain improvements, SUV mileage matches or surpasses that of the hatchback, and is far higher than that of gas guzzling sedans. "You can drive at least 20 km per litre in a Vitara Brezza. Unbelievable, isn't it?" says Kenichi Ayukawa, CEO and Managing Director, Maruti Suzuki. It helps that global crude oil prices have also fallen steeply in the last three years, and though in India, much of the expected gain for the consumer has been neutralised by increased excise duty, at least retail prices of petrol and diesel have not risen.

But the Indian car buyer is also changing, with cost no longer as vital a factor as before. An indication is the growing sale of luxury SUVs produced by the likes of Audi and Mercedes Benz, as well as Toyota's decision to sell its Lexus luxury brand in India, alongside its Innova, Fortuner and other mass SUV models. While Audi and Mercedes Benz brands cost between Rs 30 and Rs 80 lakh, both Lexus variants are priced over Rs 1 crore. "We thought it appropriate to introduce our luxury brand on the strength of our globally-acclaimed SUV range," says Akito Tachibana, Managing Director, Toyota Kirloskar Motor.

SUV growth in the luxury segment is 35-38 per cent. Audi and Mercedes Benz, too, are doing well - almost 40 per cent of Audi's 'Q' series of SUVs sell in India. "The small car will remain relevant because of growing urbanisation, smaller families and ageing population," says Rahil Ansari, Head, Audi India. "But SUVs will be the real growth engine." Mercedes Benz, too, has received encouraging response to its GLA, GLS and other SUV variants. "It's the stunning design of our SUVs, coupled with the luxury experience, that has led many Indian customers into our fold," says Roland Folger, MD & CEO, Mercedes Benz India.

However, it is not as if all luxury brands have taken off. Jeep (which parted ways with M&M long back), now owned by Fiat Chrysler Automobiles (FCA), for instance, imported two of its brands - Wrangler and Grand Cherokee - to India last year, the first priced at Rs 72 lakh and the second close to Rs 1 crore, but neither has so far made an impression. "Design and size matter a lot," says Koo of Hyundai. "To succeed, the model needs a strong dose of utility and a high quotient of smartness." FCA is now banking heavily on its forthcoming Compass which will be priced for the mass market. FCA has ambitious India plans. "India will be our base for all right-hand driven SUVs built for the global market," says Kevin Flynn, President and MD, FCA. "What we sell here will be identical to what we sell globally."

The last financial year was a tough one for automakers, with demonetisation sending sales skidding, followed by the Supreme Court ruling making BS (Bharat Stage) IV emission norms mandatory for all new vehicles sold in the new financial year. "The auto industry is stuck with 16,000 cars it cannot sell, which were manufactured some time back, because they are not compliant with BS-IV norms," says Nikunj Sanghi, a dealer of Mahindra vehicles in Alwar, Rajasthan, and former head of the Federation of Automobile Dealers Associations. "But there is hardly any SUV among them." SUVs don't pile up in factories or dealers' godowns - the demand is too strong. On the contrary, for more popular brands, there is a sizeable waiting period. Maruti is increasing Vitara Brezza production to 10,000 units a year to reduce its current six-month waiting period. "We increased Creta's production, but are still struggling to keep up with demand," says Rakesh Srivastava, Senior Vice President, Sales and Marketing, Hyundai. The success of SUVs is a global trend. SUV global sales grew from five million units a year in 2000 to 20 million in 2015, and are expected to touch 42 million in 2031, according to global market research firm Euromonitor International. India is among the fastest-growing SUV markets, alongside Thailand, Portugal, China, Spain and the US. Global car sales rose 5.6 per cent in 2016, mainly due to the soaring demand for SUVs. IHS Global Research's forecast maintains that in the US, the market share of SUVs and 'crossovers' - which combine features of SUVs and passenger cars - will rise from 40 per cent in 2016 to 43 per cent in the current year, while that of pure-bred passenger cars will decline from 36 per cent to 33 per cent.

SUV manufacturers, however, realise that as emission norms are tightened, they may well face a new threat from hybrid vehicles. The Supreme Court order of 2015, banning registration of large diesel vehicles of over 2,000-cc capacity - which was later substituted with a 1 per cent cess on such vehicles - was a pointer. As hybrid vehicles benefit from various concessions, all other kinds are likely to get more expensive.

Accordingly, a number of SUV makers are incorporating hybrid engine variants - Volvo has done so with its XC90 SUV, Toyota with its Lexus line and Nissan will soon debut its X-Trail. Hyundai is preparing to display hybrid models at the forthcoming Auto Show. "SUV models are flexible and can be adapted to hybrids," says Amit Kaushik, MD at consultancy Urban Science. "They will remain a strong driver of auto market growth in India. Their contribution will not only increase but also drive tech innovations."