A clutch of promoters raised money at fanciful valuations during the bull run. Today those stocks have hit ridiculous lows. So much for price discovery.

China is known for resorting to extreme action when it comes to cleaning up any wrongdoings in the mainland. In fact, not many Chinese investors seem to have been surprised when the China Securities Regulatory Commission (CSRC), the capital markets regulator, put a blanket ban on all new initial public offerings (IPOs) last September. The trigger for the suspension was the huge gap between the offer price and the debut price on the bourses.

The Chinese regulator cited the example of PetroChina Company, which got listed towards the end of 2007, debuting on the Shanghai Stock Exchange at 48.6 yuan as against the offer price of 16.70 yuan discovered by institutional investors through a bidding process. Later, the PetroChina stock began to fall soon after listing due to global turmoil and, consequently, many secondary investors burnt their fingers.

The stock currently is struggling 40 per cent below the issue price, at 10 yuan, losing over two thirds of its value in just six months. That’s quite a comedown for a company that on its first day of listing became the world’s first company to be valued at $1 trillion—larger than the combined value of Exxon Mobil Corp and General Electric!

Even as the CSRC gets busy, finalising the new draft guidelines for reforming the IPO pricing process, the situation back home isn’t too different. Whilst BT isn’t advocating a Chinese-style clampdown— such things can’t happen in a free market—the fact is that Dalal Street is littered with its own carcasses of hitherto highflying issues. A quick glance at some of the issues of 2007—a time when the stockmarkets were on a roll— reveals that there are at least half a dozen issues whose prices have eroded by as much as 90-95 per cent (see table). The broader market has lost close to 60 per cent over the same period. It’s not as if all the IPOs of 2007 are struggling; a few like those of Religare Enterprises, PowerGrid Corp., ICRA, Power Finance Corp and Akruti Nirman are trading higher than their issue prices.

What explains this divergence in performance? Business models, nature of industry and pedigree of management—all make a difference for sure. But as Privthvi Haldea, Head, Prime Data Base, which tracks IPOs, reasons, price is purely a function of the market. Haldea, though, is quick to add that the price discovery process generally gets distorted by inadequate are manipulative institutional bids. “We need to look for these anomalies before we can get closer to true or correct pricing in an IPO,” observes Haldea. 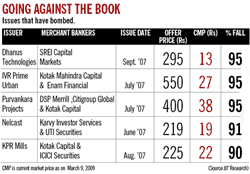 Click here to Enlarge
There is a class of investors that goes purely by the grey market price before applying for an issue. In the case of the famous IPO of Reliance Power, investors lapped up the issue because the grey market price was quoting at Rs 900 as against the offer price of Rs 450 per share. If you’re in the mood to blame malleable merchant bankers for being hand-in-glove with greedy promoters, the former for their part blame the investors for their own self-indulgence. After all, as one merchant banker points out, investors had plenty of occasions to exit during the boom times, but they didn’t because they wanted more. Second, it’s the investor— although not the retail Joe—who fixes the price under the book-building process. So, why blame the intermediaries or the promoters, asks a merchant banker.

The argument that investors decide the price doesn’t hold good as the issuer and the merchant bankers indicate a price band of 20 per cent, which is decided during the pre-IPO roadshows with institutional investors. “Retail investors actually have limited options as they have to bid at the cut-off (on the higher side) to better their chances of an allotment,” says a market observer. Further, institutional investors, who pay only 10 per cent to bid, leverage their money to get the maximum allotment, which in a way creates an euphoria as issues get oversubscribed many times over because of institutional investors. Some merchant bankers suggest that a Dutch auction is a more reformed price-discovery mechanism as there is no pre-decided price band. “Investors can bid any price they think as the fair valuation of a company and the final price is decided based on the price point where the company receives maximum demand,” says a merchant banker.

A pre-IPO placement by promoters to private equity players or foreign institutional investors (FIIs) also influences the price-discovery process. “No private equity or FII should be allowed to invest a year before the IPO,” says a merchant banker. The promoters and the investment bankers should also take the responsibility of reasonably pricing their issue to keep investors’ faith in the book-building pricing. Or else a Chinese-style crackdown may be the only way to reform the primary market.