Simple yet secure Aadhaar-based transactions may find favour among the uninitiated.

Shiva Kumar runs a provision store at Attibele, a semi-urban area on the outskirts of Bengaluru, next to Hosur in Tamil Nadu. He mostly sells groceries, vegetables and other FMCG products such as soap, shampoo and hair oil - goods that are always in demand among his shoppers, many of whom travel an hour or more to go to the 'city' for work. And much like the majority of Indians, they had always paid in cash, before demonetisation.

All that changed on November 8 last year when the government banned Rs500 and Rs1,000 notes, withdrawing about 86 per cent of the total currency in circulation. Even after six months, Kumar's customers find it difficult to access cash as ATMs often run dry. "Even when they have cash, some people give me Rs2,000 notes for purchases of Rs120. Where would I get change for that?" asks Kumar.

Initially, he used to extend credit to his customers (till they have enough smaller denomination notes to pay the actual amount), but monitoring credit was becoming a challenge and hurting his margins as he had to pay his dues on time. So, when an agent from a leading public sector bank told him about a hassle-free micro-ATM - basically a smartphone attached to a fingerprint reader that validates a buyer's Aadhaar ID and bank account details, and enables digital payment, all via a mobile application - Kumar decided to give it a try. Based on the existing Aadhaar-enabled payment system (AEPS), this real-time merchant transaction solution across banks has kept things simple and efficient. Instead of credit/debit card, mobile wallet or even a smartphone, all a customer needs is the 12-digit Aadhaar number and an Aadhaar-linked bank account. To make a payment, one has to quote the Aadhaar number and validate it through biometrics. As soon as the merchant's device scans a customer's fingerprint and matches it with the specific Aadhaar record, cash will be instantly transferred to the merchant's account. In case one has multiple bank accounts linked to Aadhaar, he/she needs to specify which one should be used for the transaction. In brief, AEPS ensures that one has the convenience of paying with just a finger tap. The entire transaction is cashless, cardless and pinless - you need not remember and type in PINs or passwords.

Although sellers require a smartphone-biometric device combo for this kind of transaction, the latter costs only Rs2,000 or so. Also, the mobile app used here works on Android - the most widely used operating system in India and the most affordable. Plus, there is the added advantage of skipping the merchant discount rate (MDR) that has to be paid for card transactions done through traditional point-of-sale (PoS) machines.

The Aadhaar-enabled PoS device has helped, says Kumar. To begin with, it is quick, convenient and familiar as almost all his customers use Aadhaar for several direct benefit transfers, including cooking gas connections. Second, the technology has been around for some time now and is fairly simple, although he had cold feet initially. "I am accepting Aadhaar-based payments now but the app does not work well with my Jio connection. I expect this will be sorted out soon," he says. 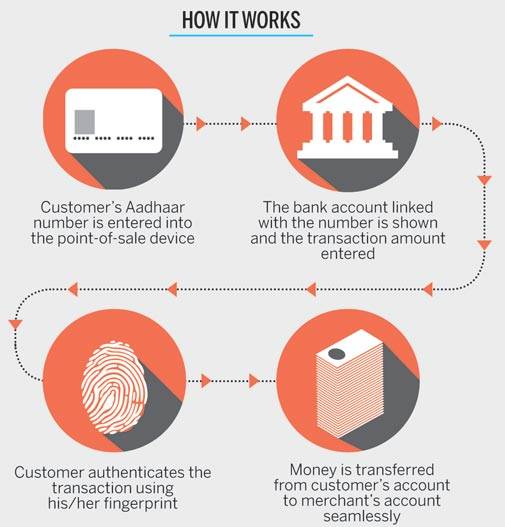 Still, Attibele is not another Shirki in the making. The Maha-rashtra village shot into fame a few months ago when it was adopted by the State Bank of India to make it completely cashless on the back of its Aadhaar-enabled payment solution. In contrast, residents of Attibele often "come to the shop just out of curiosity", says Kumar, and the number of Aadhaar-based transactions has not really peaked. But he expects that to change with time. The government, too, hopes to onboard many more merchants like Kumar in the coming months if the initiative is to take off in a big way.

Not to be outpaced by the government's intense campaigns and multi-pronged strategies, a few private sector players such as Mahindra Comviva and Novopay have rolled out their own Aadhaar integration solutions. Comviva has already launched payPLUS, a merchant accept solution that uses a customer's Aadhaar number and biometric data for digital payment - much in the same way the AEPS-backed ecosystem does it.

Srinivas Nidugondi, Senior Vice President and Head, Mobile Financial Solutions, Mahindra Comviva, says, "India's digital payment initiative has the potential to bring massive social and economic transformation by formalising the rural economy, which will not only help bring the financially excluded into the mainstream economy but will also generate jobs and opportunities. We believe that the success of Digital India will depend on the right ecosystem enablers."

Novopay, started by Srikanth Nadhamuni, former technology head of the Unique Identification Authority of India (UIDAI) that pioneered Aadhaar, says it is focusing on 900 million unbanked/underbanked people. Unlike most start-ups, which focus on the middle class, Novopay believes the opportunity is bigger in rural India.

Mobile wallets like PhonePe or wallets developed by various banks have also incorporated the AEPS.

Will Aadhaar-based payment systems usher in a cashless era pan-India? It is too early to speculate as there are challenges - from bringing in more banks to linking more bank accounts to Aadhaar to putting foolproof security systems in place to preventing data hacking and identity theft. But the initiative needs to be scaled up fast if the AEPS is to become ubiquitous, playing a key role in bringing a large chunk of the unbanked or the informal economy under the digital umbrella.