With another coalition a certainty, it’s time to discount party philosophy as pointers to the reforms. Expect convenience, not conviction, to dictate the economic agenda.

Last July, when the air was thick with political posturing in the run-up to the trust vote on the nuclear deal, Uttar Pradesh Chief Minister Mayawati called a rare press conference. With the press corps present in full force, the Dalit leader read out a prepared statement on the deal and then decided to field some questions. One query related to her strategy for solving India’s emerging power crisis should she become Prime Minister in the wake of her stance on the nuclear deal. “My strategy,” said Mayawati, pausing dramatically, “I will tell you when I become the PM.” Her comment drew immediate applause from the audience.

Mayawati—seen as one of the contenders for the top post—is not alone in her ambiguity (deliberate or otherwise) on key economic policies. Many of her colleagues, especially from the regional parties, follow the same principle. Yet, they are the ones who could end up controlling the economic destiny of the country and threaten to turn policy-making rudderless.

This is because national political parties, who bank on the logic of coalition politics to come to power at the Centre, are seldom able to implement the lofty manifestoes that they brandish during election time. The last 15 years, in fact, represent an era less of economic policies of conviction and more of politics of convenience. 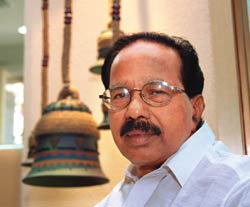 M. Veerappa Moily
Take a peek at what the last three governments were able to achieve and this becomes clearer. The Congress-led UPA government that held sway since 2004 has been unable to implement any significant economic policy in the last five years and partly blames the Left for its inaction. The BJP-led NDA did better—but it too had a stop-and start approach to reforms for which it blamed its coalition partners. The United Front government before the NDA showed some reformist zeal, but lost support of the Congress before it could do much.

This trend is grim news for India’s post-election economic future. If the economy ever needed a boost from sound economic policies, it is now more than ever.

Another key factor: India is an increasingly young and rapidly urbanising country. The urban population is expected to rise to 32 per cent of the total by 2021, up from 27 per cent in 2001. “Today we have reached a point where the urban electorate does not vote on the basis of caste and other such factors. They are voting on the basis of goods and services received from the state,” says Vinayak Chatterjee, Chairman, Feedback Ventures.

Ramesh Ramanathan, key architect and campaign coordinator of the Bangalore-based Janaagraha, an NGO, says that, given India’s rapid urbanisation, “any new government will have to focus on modern India’s urban problems which have implications on virtually every front.” Janaagraha is also involved in the Jaago Re campaign, urging urban youngsters to vote. This is also the constituency which is most affected by the economic downturn.

So, what prescriptions are the main political parties promising in order to alleviate India’s current economic woes? All India Congress Committee General Secretary M. Veerappa Moily, who is also the Chairman of the Administrative Reforms Commission, told BT: “The party could well consider a Brazilian-style conditional direct cash transfer (Bolsa Familia) to poor families.” He also hinted at an affirmative action plan much like that in the US. Though, while affirmative action in the US means absence of discrimination, in India it enforces positive discrimination.

Yashwant Sinha
On the other hand, Yashwant Sinha, the former NDA finance minister, was clear that the BJP would push for better delivery of existing schemes through a national identity card for all citizens. As for mega infrastructure projects, the party would promote inter-linking of rivers. “What we need is systemic change. The old order will not deliver. During the last five years, the UPA government has shown no strength or will to make those radical departures,” says Sinha. Moily contends that the NDA is simply a better self-marketer.

Nilotpal Basu
The Left, though unlikely to perform better than its current strength in Parliament, may have a say in policy-making if a Third Front government comes to power. The Left remains steadfast on higher taxes and higher government spending on social sectors, but interestingly, its rhetoric on contentious issues has become more calibrated. CPI(M) leader Nilotpal Basu, on the issue of foreign direct investment says, “We are not opposed to FDI per se. At the same time, one has to see the necessity. We will have to see on a case-by-case basis rather than throwing up any broad policy.” On contentious labour reforms, he adds: “How labour productivity can be increased can be discussed, but you cannot pre-decide that there should be no protection, more so in our context because we have a very weak social safety net.”

Regional parties complicate the political landscape significantly, although Pratap Bhanu Mehta, President and Chief Executive, Centre for Policy Research, believes in being optimistic. “The advantage of these parties having a lot of say is that they are interested in a narrow set of issues. But they do not have a wide range of ideological issues. The optimistic scenario is that regional parties are open books on 80 per cent of the reforms that matter if they get their pound of flesh. That is premised on somebody being able to negotiate with them. These are hard bargains,” he says.

Though things could change dramatically in the weeks to come, right now it seems that both the Congress and the BJP will most probably see their headcount in Parliament shrink further. The Left Front, Mayawati’s Bahujan Samaj Party and Mulayam Singh Yadav’s Samajwadi Party will be unable to lead the Centre alone. Therefore, what is more likely is a ragtag coalition of regional parties at the Centre with outside support from a national player, the BJP or Congress at the Centre, supported by coalitional allies.

If the past is any indication of how the future will play out, none of the above outcomes bodes well for decisive economic policy making in India post the elections.