The man from Chile had no magic, just some adroit footwork to help Bata shake off losses, get back its shine — and keep it.

When Thomas Bata handpicked old loyalist Marcelo Villagran in 2005 from Bata’s thriving subsidiary in Chile to steer Bata India, the shoe major was scuffed and worn out. The balance sheet was splattered with red ink, shareholders were disgruntled, workers were unhappy— and India Shining was no longer thronging the outlets of the country’s largest shoemaker.

“But even then, Mr Bata highlighted the immense opportunities the country and its market offered for the brand,” recalls the unassuming Villagran, sitting at Bata’s corporate headquarters in Gurgaon.

It was, perhaps, this underlying optimism and simplicity that had helped Villagran, who took the helm as Managing Director in February 2005, to steer it through one of the most dramatic turnarounds of the decade and into its longest profitmaking streak this decade.

Recalling that fightback, from a loss of Rs 62.5 crore to a profit of Rs 12.5 crore the next year, Bata India Chairman Priya Mohan Sinha, a former head honcho of Pepsi and director of Hindustan Unilever, says: “What we achieved in 2005 was nothing short of remarkable. I’ve worked with Hindustan Unilever and Pepsi before this, but the experience of reviving a sick company like Bata was thrilling.”

With over 1,200 stores nationwide and 70 new stores planned this year, and with profits growing in a world-wide recession (Rs 10.33 crore for the first quarter of 2009 and Rs 18.34 crore in the second quarter), brand Bata is now basking in its hardearned retail glory.

“The turnaround was not so much from the point of marketing but was more closely linked to sales, quality and manufacturing capacity,” says Sinha. 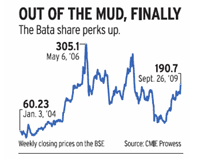 But if you ask the Managing Director how he did it, don’t expect him to talk rocket science. Villagran, 67, says he had a three-point strategy. “The first and the biggest hurdle was the footwear collection. It was good but it wasn’t giving us any margins for profits. So, we did a lot of re-engineering with the shoes and designs,” he says.

Bata doubled the number of people preparing the collection, cut costs by outsourcing a lot of operations, and refreshed the collection with chic designs without increasing the price, so that “Bata continued to remain very affordable.” And yes, Bata has been importing parts on a large scale from China.

Expanding the number of stores came next. “We started generating good cash flow and were capitalised in 2005, so it was possible for us to expand. The primary focus was the expansion of big-format stores,” says Villagran. While the format was international, Villagran kept a hawk’s eye on the tiniest detail, like displaying shoes in pairs.

“We’re the only one to have thought of doing so,” says a beaming Villagran. The segmentation highlights the chic and trendy designs.

All this came after Bata tackled its famed unions. Villagran shrugs off unions as the least of his worries today, choosing instead to talk of the aggressive specialisation of factories.

“Specialisation was third on our list. Bangalore does school shoes, Hosur deals with Hush Puppies and the one in Kolkata manufactures sports shoes and sandals. This specialisation has helped us in improving the quality and reducing costs,” Villagran says.

Room for all
And how is Bata tackling global giants like Nike and Reebok, apart from the unorganised market? “Around 60 per cent of the market is unorganised and I feel there’s room for all of us. Our strength lies in our family stores, which have shoes for everyone— from parents and grandparents to school and college goers. Even busy professionals,” says Villagran. “We’re positioning our stores as the most knowledgeable in India. I guess it comes from having a presence here for a good 77 years.”

Analysts are again taking an interest. Debanjana Chatterjee, Senior Research Analyst, FCH Centrum Wealth Managers, notes Bata’s attempt to position itself as an FMCG player. “It’s trying to project itself as a youthful, fashion-conscious brand…and is doing constant expansion and innovation to stay ahead,” she says.

Chatterjee also notes Bata’s sound presence in niches like industrialsafety footwear, which it entered 18 months ago. “Although these areas do not contribute significantly to sales, they offer a tremendous potential as a large part of the market is unorganised,” she says.

Bata is also making a big play in the defence sector (in Chile, Bata is a big supplier to the defence forces), currently a monopoly of small suppliers. Bata reckons there are three million defence and paramilitary forces in India, and each of them is issued four pairs of shoes a year. That means a total of 12 million pairs: Last year, Bata sold 45 million pairs of shoes.

Fan following
While strategies and plans are fine, what greatly benefits Bata is the fact that the man at the helm lives, eats and breathes the brand, and has been doing so for the past 38 years. This has reflected on morale: upbeat is the word for everybody down from senior officials who had seen Bata’s decline and fall, to the salesman at an upmarket outlet pushing a particular pair priced at over Rs 5,000 in a recession-hit market. “Every person who was depressed is now upbeat, most upbeat,” says a Bata veteran. “We have taken the right steps, done the right thing at the right time.”

“Bata was initially dependent more on its own production, and shoes that were not accepted by the market,” says Sadhu, who retired from Bata in 2002 as a Senior Vice-President, after a 19-year stint.

“So, they started importing goods that brought in high margins…I must say their merchandising team has done a remarkable job by introducing new lines every few weeks,” says Sadhu.

Anustup Datta, Partner, Vertebrand, a brand strategy consulting outfit, points out that Bata as a brand has always enjoyed a fairly strong recall among consumers and has never lost out on its mindshare.

“When that is the case, it is never difficult to regain market share for any brand,” says Datta. At the same time, by improving operational issues, it has gained a better share. “Also, luckily it has never been seriously challenged by another brand at a national level—this has made its climb back easier,” says Datta.

Chairman Sinha is also all praise for Villagran: “I remember seeing him travel extensively and personally interacting with the people to be able to bring about the changes.”

Villagran laughs when reminded of his workaholic behaviour and devotion to the company. “Perhaps, it helps that I hardly socialise and lead a fairly boring life,” he smiles. With his family in Chile, and the potholed roads of Gurgaon a long way from his favourite passions of sailing and biking, his weekend pastimes today include dropping into Bata stores. “I know India very well now,” he says. He should: not many MDs hang out at their stores and interact with customers.

Property buyers are back