The Rich and Their Uncommon Desires...

....and the travails of service providers
By Manu Kaushik | Print Edition: September 25, 2016 THE LONDON TOUCH: I am going to miss the London weather and my rose garden. I would like to have a garden in my bedroom. Is that possible? (Illustration: Ajay Thakuri)

Soon after arriving at Mumbai's Chhatrapati Shivaji International Airport, Caroline Winterfell headed to The St. Regis, a luxury hotel in Mumbai's tony Lower Parel area. It was sweltering May. The weather in London, from where she had come, was much better.

Hotel manager Cajetan Araujo remembers the moment he saw "the VVIP guest" in the foyer. Just after he received her, he says, Winterfell turned towards the driveway for a stroll, showing interest in the flora in the hotel. "I am going to miss the London weather and my rose garden. I would like to have a garden in my bedroom. Is that possible?" she asked the manager. "Of course," he said, his heart beating fast.

While requests such as placement of white flowers and vanilla candles, or playing of Beethoven in the room, are common, this one was a bit unusual. Araujo had to rope in the hotel's horticulturist for sourcing miniature plants - Indian and Japanese roses and pots with old flowers that give a strong smell. Besides these, the hotel put a spray bottle in the suite so that she could water these plants. It also gave her a book on gardening tips as a souvenir. "The idea was to make her feel at home. People who are into gardening nurture their plants like pets," says Araujo. "She stayed in the hotel for 10 days. She wrote us a letter after that and has become a regular guest," he says.

Winterfell's request for a garden in the room, say those in the service industry, was quite modest compared to what some other rich and famous are known to demand. A few companies BT spoke with shared some instances, but without naming the clients. For example, a biking enthusiast asked the staff of a hotel to book a separate suite for his high-end BMW bike as he did not want to keep it in the parking lot. "The uncanny demands of the rich are beyond the imagination of most people," says a luxury service provider.

Last year, an ultra-rich client of Quintessentially Lifestyle, an international concierge services firm, asked it to source for him and his wife a dinner invite to Dining Impossible, one of the world's most sought-after parties that includes sessions with Michelin Star chefs and celebrity sommeliers. The guests go restaurant hopping over three days and rub shoulders with the uber-rich from all corners of the world. The event's website says: "Dining Impossible takes place in some of the world's best restaurants, which view these gastronomic blowouts as an opportunity to present their finest experiences to a party filled with international notabilities and opinion makers." Wanted, an invite to

Conceived in 2009, it has been hosted in the world's top food capitals such as New York, Copenhagen, Barcelona, Lima, San Sebastián and Piedmont. The soiree is more than lavish meals. It includes cocktails and after-parties too. The invites, of course, go to the wealthy and cost thousands of euros.

"You don't hear about Dining Impossible in mass media. It's an underground party of the super rich. It is for people with a discerning palate and deep pockets, those who have exposure to global cuisines. We were able to source the invites for Copenhagen through our global network," says Mishti Bose, Group CEO, Quintessentially.

Luxury hotels capture the minutest of details about guests. Oberoi Hotels & Resorts, for instance, records each detail of guests, including food/beverage preferences, allergies, housekeeping needs and preferred room temperature. Still, there are demands that leave them stumped. Take Bangalore's Hilton, an upscale hotel overlooking a scenic golf course that emails guests in advance to ask about their preferences. "It's an open-ended question. We generally expect people to share food preferences," says General Manager Parag Sawhney. However, one guest, in response to the mail, asked to be treated like royalty with his initials, in gold thread, weaved in bath robes and bed linen. Even though he was not a regular, Sawhney couldn't ignore the request. By the time the guest arrived, the hotel had got "SL" weaved into two pillows. It also got "Sanjay" embroidered on pockets of two bath robes. There were back-ups (two each) also in case one set went to the laundry. Sawhney, however, decided to take things a step further and served specially-prepared macaroons in a pattern that read like the guest's initials. "We believe in delighting our guests. We don't treat it as an expenditure but as an investment," he says. MY FATHER IS TURNING 80: It should not be a regular affair; money is not a problem

Dozens of high-profile parties are organised every year. But this one stands out. In July, a Chennai-based industrialist got in touch with Ruban Das, the officiating general manager at Hilton Chennai. He wanted to celebrate his father's 80th birthday. Das' brief was - it should not be a regular affair, and money was not a problem. 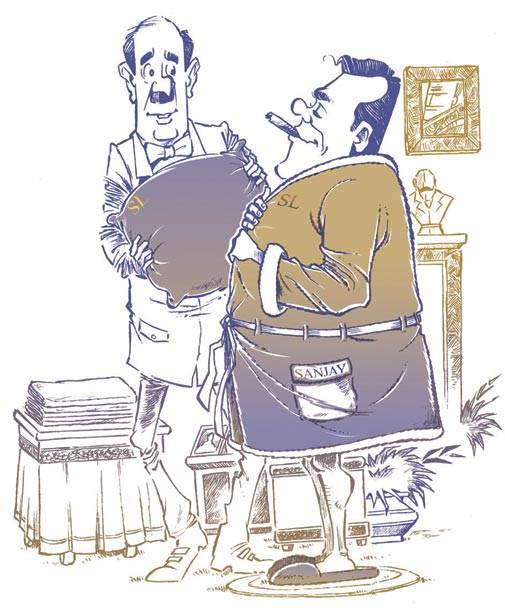 THE ROYAL ME. Can you get my initials weaved in gold thread into bath robes...and, if possible, the pillows too?

Once the theme was finalised, Das and his team worked backwards to arrange for the party. The entire level three of the hotel was blocked, including the three dining set-ups that are otherwise open for guests. At the entrance, some 20 paparazzi-style photographers clicked pictures of guests. The next stage was human fountains. The music was unique. Violinists and cellists, flown in from Europe, played western classical music. The eight cabanas were revamped into souks serving eight different cuisines: Italian, Japanese, Mediterranean, Mandarin, Spanish, grills, kebabs and curries, and dim sum and fried. Some souks had their own appetizers, main course and desserts.

The highlight was formation of the cake. Some 40 chefs and associates, carrying 80 mini-cakes, paraded in the hall and formed a cake pyramid, synchronised with pyrotechnics. "The who's who of the city attended," says Das.

The growing demands of the affluent have spawned tens of concierge services. Most of them are making a killing. Take Quintessentially, which has 62 offices across the globe. In India, it offers three types of membership, starting from Rs 3 lakh per annum. The elite membership, which costs Rs 10 lakh, is the one that has the most takers. MY BEST FRIEND: Can you get me the rare Japanese Shiba-Inu puppies I saw in that movie?

Globally, the rich and the famous are known to make even more bizarre demands. Singing star Mariah Carey once asked a hotel to install a new toilet seat and gold faucets in her suite. American singer-songwriter Justin Timberlake insists that the entire hotel floor be booked for him and his entourage, air-conditioning filters changed before his arrival, and door knobs of his suite disinfected every two hours.

About two years ago, a rich Indian in his mid-50s asked his account manager to buy for him rare Japanese Shiba-Inu puppies. Why Shiba-Inu? Apparently, the man had watched the 2009 Hollywood movie, Hachi: A Dogs Tale, in which a dog of this breed plays a key role. Shiba-Inu are fiercely loyal to their families.

The standard procedure for every request, says Bose, starts with collecting information about sourcing and pricing. In this case, it sent details such as the dog's pedigree, break-up of costs, paperwork and immigration requirements, expected time of arrival, doctor's fee, etc. The twin puppies joined their new family in a few weeks.

Keeping the rich happy is not child's play, after all.