The rupee and the small exporter

Sitting in his Chennai office, Rafeeque Ahmad, Chairman, Farida Group, a leather shoe exporter, is a worried man. The appreciation of the rupee against the dollar has severely eroded the profit margins of his company, forcing him to contemplate drastic measures like reducing his workforce.

Sitting in his Chennai office, Rafeeque Ahmad, Chairman, Farida Group, a leather shoe exporter, is a worried man. The appreciation of the rupee against the dollar has severely eroded the profit margins of his company, forcing him to contemplate drastic measures like reducing his workforce. “We are planning to shut one factory and will retrench 15-20 per cent of our employees,” he says.

Cut to Mumbai. Vijay Agarwal, Chairman of Creative Group, a leading textile exporter, is also concerned. “We are losing orders due to the rise in the rupee value and have already asked some employees to leave.”

These are not isolated incidents. Exporters across sectors are feeling the heat of the strengthening rupee, which is now trading at just over Rs 39 to the dollar, its strongest level since March 1998, having risen more than 12 per cent against the dollar this year. This has meant dwindling margins for exporters and, in the face of increased competition from other low-cost countries in Asia, has dealt a body blow to both services (mainly information technology) and merchandise exports. 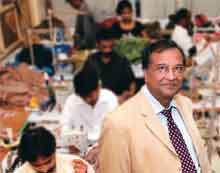 To underline the gravity of the situation, the Federation of Indian Export Organisations (FIEO) recently held a press conference in New Delhi to announce that traditional exports have been severely affected and that almost four million people have lost their jobs. It also cautioned that if the trend persists, eight million jobs will be lost in 2007-08. (These are FIEO’s own estimates and include actual and notional job loss.)

The textiles and leather industries, in particular, which source their raw materials primarily from the domestic market, have been severely hit. According to FIEO estimates, 600,000 people in the textiles industry alone will lose their jobs this year.

Already, India’s exports are showing signs of strain and growth rates are slowing down noticeably. The latest figures, for August this year, show that export growth, at 19 per cent, is significantly slower than the figure of 27 per cent in August 2006. Crucially, reflecting a sharp fall in exporters’ earnings, exports grew just 4.31 per cent in rupee terms this August compared to a 35 per cent increase in August 2006. The slowdown in exports, which account for nearly 13 per cent of India’s economy, is taking a toll on manufacturing as a whole. Growth in industrial production, as reflected in the Index of Industrial Production (IIP), slipped from 13.22 per cent in July 06 to 7.1 per cent this July.

For the first time, the government is looking anxious as well. After reiterating consistently that the country will meet the export target of $160 billion (Rs 6.4 lakh crore) for 2007-08, the government has now conceded that this figure may not be achieved. Commerce Secretary Gopal K. Pillai admitted that the government “will be quite pleased if it (exports) reaches even $140 billion (Rs 5.6 lakh crore)”. He also reacted promptly to announce more incentives for exporters. The relief measures include refund of service tax on additional services and the payment of interest on exchange earners foreign currency (EEFC) accounts. 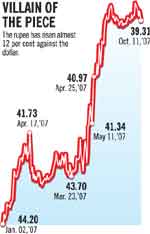 The IT industry is the worst hit. From a mere 5 per cent share of India’s 1996-97 exports of $33 billion (Rs 1.32 lakh crore), it has increased its share to 25 per cent of the country’s $120 billion (Rs 4.8 lakh crore) exports in 2006-07. This represents a compounded annual growth of 35 per cent over a 10-year period, making it the fastest growing and the biggest exportoriented sector in the country.

But the weakening of the dollar has meant that the IT bigwigs have been forced to lower their revenue guidance for the future. Says Suresh Senapathy, CFO, Wipro: “Every 1 per cent appreciation of the rupee impacts margins by about 40-45 basis points. From the beginning of this year, the 11 per cent-plus appreciation of the rupee has resulted in a 4.5-5 per cent hit on margins.” However, Infosys Technologies has managed to buck the trend in its second quarter numbers this financial year. It has not only revised its guidance upwards but has actually expanded its EBITDA margins by focussing on cost cutting and negotiating higher billing rates with clients.

In merchandise exports, what is really squeezing the exporters is the fact that currencies of competing Asian countries have done better against the dollar over the last year. For instance, the Chinese yuan has appreciated 4.6 per cent only and the Pakistani rupee and Bangladeshi taka have actually depreciated by 1.4 and 0.43 per cent against the dollar, respectively, making their exports more competitive. The impact of this has been sharp, particularly in sectors like textiles, leather and handicrafts, which have a low percentage of imported raw materials and, hence, don’t have a natural hedge against a rising rupee.

And it’s not only the profitability of exporters that has been impacted; their order books have also taken a significant hit. Says Kishore Shah, CEO of Crystaline Exports, a Mumbai-based garments exporter: “Generally, we have a better order position for the Christmas season, thanks to orders from the US and Europe, but this year, it’s down about 20 per cent.”

To combat this trend, the textiles industry is now considering new strategies. Exporters like Crystaline are actually exploring the possibility of importing cheaper raw materials from countries like China to shore up their margins, which are now hovering around the 2-3 per cent mark. They are also trying to expand their product portfolio and shift to higher valueadded products that enjoy better margins. Says Shah: “We are exploring the possibility of exporting hand-embroidered garments that fetch better prices.”

The leather industry is also trying to lower costs by importing cheaper inputs. Says Ahmad: “We are trying to import inputs from South America and Australia but it will take a few months at least to make the transition.” Meanwhile, exporters will continue to suffer and the country’s exports will remain at sub-optimal levels.

Other export-intensive sectors like engineering and chemicals are also feeling the pinch. Light engineering companies, for instance, have been affected by the rising costs of inputs like crude oil and steel. This, combined with the stronger rupee (about half their invoicing is done in dollars) have almost inevitably meant that their bottom lines have been hit hard.

Says Sharad Kumar Saraf, Managing Director, Technocrafts Industries, which manufactures and exports both textiles and metal products like drum closures, steel tubes and scaffolding systems: “We are negotiating price increases of 3-4 per cent from our customers, but our bottom line will still take a 15 per cent hit.” Companies are also trying to invoice in other currencies such as the euro in Europe and the Japanese yen in Asia. But the fact remains that the US is a major, and growing, market for these companies and they can’t ignore it altogether. Says Saraf: “The maximum demand for our products is from the US.” 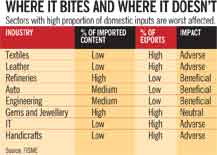 The chemicals industry faces similar problems. On the one hand, the cost of raw materials like benzene and sulphur have shot up globally; on the other, it faces tough competition from cheaper Chinese exports in basic product categories like dye stuff intermediates, pigmented intermediates and agro chemical intermediates. Says Madhav Aggarwal, Managing Director of Sajjan India, an exporter of specialty organic chemicals: “Companies are now focussing on increasing productivity. Some are also cutting down on production to deal with the situation.”

Auto parts manufacturers are also finding the going tough. They have started losing orders from OEMs as their products are more expensive than those offered by competitors in China and Brazil.

Most of the exporters are now negotiating protective clauses (like the right to renegotiate contracts in the eventuality of significant fluctuation in the rupee value) in their new contracts to overcome the crisis. Says Ashok Taneja, President and CEO, Shriram Pistons, an exporter of pistons, rings and engine valves: “We recently lost three contracts from Renault to companies in Turkey, China and Brazil. Had the rupee been at 45 levels, we would have won all three.”

Interestingly, even the gems and jewellery sector, which has a high level of imported raw material (almost 70 per cent), is also feeling the adverse effects of the hardening rupee. Their problem is that they paid upfront for their raw materials and the entire business cycle till the delivery of finished goods in the export market takes about six to eight months. Result: they paid for their inputs at much higher rupee rates and are now delivering to customers at significantly lower rates—in effect ruling out any advantage of the currency appreciation.

Says Sanjay Kothari, Chairman, Gems & Jewellery Export Promotion Council: “Much of the export growth in the industry today comes from trading in polished diamonds; this received a fillip after the government removed import duties. But at the manufacturing level, there is no growth.”

Hemmed in from all sides, exporters are now looking to the government for succour. And they have a long wish list. FIEO wants the government to further enhance the DEPB and Duty Drawback Rates. It is also demanding that more services used in exports be exempt from the service tax net. Says G.K. Gupta, President, FIEO: “Central and state taxes being paid by exporters must be refunded to them.

The government shouldn’t expect us to export taxes.” A section of exporters wants the government to ensure that tax exemption for export-oriented units is extended beyond 2009. Then, the exporters also want RBI to move to a softer interest rate regime. Says Gupta: “RBI should reduce the cash reserve ratio (CRR) and also cut the Bank Rate. This will arrest the inflow of dollars.”

At the moment though, there is little respite around the corner for exporters. The impact is greater for small and medium enterprises that account for almost 70 per cent of India’s exports. Unlike bigger companies, most of them are unable to effectively hedge their currency exposure. Explains Gupta: “Bankers don’t want the smaller players to hedge because of the risks involved. Also, many of them are not well informed about the mechanism of hedging itself.”

The only certitude in this allpervasive mood of gloom and uncertainty is that the country’s target of achieving a 30 per cent export growth will not be met. Says Gupta: “In the present situation, we can realistically expect growth of only about 20 per cent.”

(With additional reporting by Rahul Sachitanand)