Quietly, Malvinder and Shivinder have built a clutch of businesses from healthcare to financial services that is already worth more than a fifth of their flagship, Ranbaxy. How big can their non pharma empire get? BT's Shalini S. Dagar finds out.

The chemistry was right,” says Sunil Godhwani, Group CEO and MD of Religare Enterprises, in his booming voice about the takeover of the oldest brokerage house in London, Hichens Harrison, for around £55.5 million (Rs 448 crore). Sitting in the former Ranbaxy office, which now houses the growing Religare team, in Delhi’s commercial hub of Nehru Place, Godhwani says, “The company was hungry to expand overseas.” 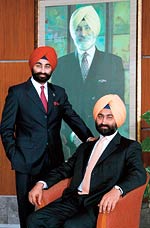 Malvinder Singh (R), Shivinder Singh
The deal, which marks the first overseas acquisition in the financial services space by an Indian company, started out with talks for a general business alliance. Hichens wanted to set up an equity desk in India. After Godhwani met Hichens CEO Adam Wilson, the chemistry kicked in. After a swift one-day trip to London to meet the entire Hichens team, Godhwani was convinced. The deal was escalated to a full takeover, and armed with a board approval, Godhwani made the offer. Last fortnight, the deal got the regulatory approvals and is now being completed. Godhwani is a great believer in chemistry and quick action. He wrapped up a joint venture with Australian financial services firm Macquarie for wealth management in three hours. “They were blunt and I was more so,” he quips.

Religare, which listed on the Indian stock exchanges only in November 2007, seems to be on to a good story (see The Religare Subsidiaries). In the coming months, the various other pieces will fall in as the rollout of the life insurance and asset management joint ventures with Dutch insurance and pensions major Aegon becomes visible. The regulatory approvals are just in. And that is getting reflected on the stock markets. As against the issue price of Rs 185, the stock has mostly stayed above Rs 300, holding its initial gains in the following months despite the stress on the stock markets.

There were many within the company who felt Religare could have listed a year later when it would have been far more valuable. However, Godhwani very pragmatically points out that the “listing when we did worked well for us. Imagine the opportunities we would have missed? Listing provided us acquisition currency.”

Post-Hichens there is more to come as the company is believed to be exploring two more deals. And this dovetails neatly into the plan that the promoters— brothers Malvinder Mohan Singh and Shivinder Mohan Singh, sons of the late Parvinder Singh who virtually made Ranbaxy Laboratories the first Indian pharma MNC—have for the company.

Malvinder, who is the Chairman of Religare as also other non-pharma businesses, had worked with American Express Bank and Merrill Lynch in his early professional life. “I always wanted to create in financial services what Dad had done in the pharma industry— he thought way ahead of his time.” He talks of a global financial powerhouse such as Goldman Sachs with an Indian parentage. “The Hichens acquisition provides branding, institutional credibility and clients, licences to operate in European and other emerging markets as also an attractive base to tap investments into India and viceversa,” says a private equity investor. Unsurprisingly, within the group, Religare is called ‘Gateway of India’ and it is a business that will scale up much faster than any other within the group.

However, Religare is not the only story buzzing within the group. Fortis Healthcare, the second-largest hospital chain in India, also listed last year on Indian bourses. With 14 hospitals in its fold, the company is aspiring to a 40-hospital and 6,000-bed network. Last year, Fortis acquired around 48 per cent stake in Chennai-based Malar Hospitals after the high-profile but contentious takeover of Escorts Hospitals. The legal cases that emanated from Escorts, though still alive, have weakened considerably, says Shivinder, adding, “There is light at the end of the tunnel.” Sunil Godhwani
The legal overhang along with the high capital expenditure involved in the healthcare business has led to comparatively lukewarm response to Fortis Healthcare in the markets. However, as Shivinder points out, the business will start creating value soon enough “as the cash flows from the newly commissioned hospitals build up. I do not think we have managed to get our story across to the investors. We are working on that”.

That stems from the fact that cash flows build up over a period of three years or so. Fortis’ expansion strategy straddles greenfield hospitals, acquisitions and management contracts. Over the years, the acquisition scene has changed significantly. “It takes a little longer to close deals. There are very few promoters who want to cash out completely. The entry of private equity players, too, has affected valuations. Earlier we would probably be the only people negotiating,” says Shivinder.

However, that is the reason that the group is now coming up with non-exclusive alliances with real estate majors such as DLF, Emaar MGF and Ansal API to set up hospitals in their townships. This, along with management contracts, would rein in the capital expenditure for Fortis Healthcare.

There are other arrows in the promoter group’s quiver, apart from the flagship, Ranbaxy. Two more companies are poised to go public within the next one year under the Religare brand. One would be the aviation business that houses an air charter services company, Ran Air Services, and the other will be SRL Ranbaxy, the largest pathological services company in India as well as South Asia. Religare will be the umbrella brand for the services business (barring healthcare).

Hence, prior to its listing SRL Ranbaxy would be rebranded as Religare. Currently it is also in the process of exploiting synergies with Fortis Healthworld. Indeed, the group itself is looking at a branding exercise down the year even as it looks to add non-life insurance and medical education among other businesses to their portfolio.

As more group companies get listed, the market value of the non-pharma group is expected to rise, especially rapidly where yet again the group seems to be in negotiations for two more deals. Already the combined market capitalisation of the listed non-pharma entities— Religare, Fortis Healthcare along with Fortis Financial—swings between a sixth to a fourth of the flagship company. Though Ranbaxy itself is likely to grow fast, within the group in the coming years much more value creation will happen in the healthcare and services pillars as they dip into India’s inherent economic growth prospects.

According to estimates, the per capita healthcare spending in India is poised to rise from $32 in 2006 to $53 by 2009. This is even as increased life expectancy is coming hand in hand with the increased incidence of lifestyle-related illnesses and higher healthcare spends. Similar forecasts are made about the penetration of financial products, especially equities into the Indian households. And mind you, Religare has a significant retail play.

However, rapid growth has its own challenges. And key among them is people. By putting Godhwani, who is a family friend, in charge of services vertical, the Singh brothers have addressed the problem at the core team level. “I am a very empowered CEO and that leads to success,” says Godhwani. Malvinder is the Chairman of the non-Ranbaxy companies in the group even as he retains operational control of Ranbaxy. 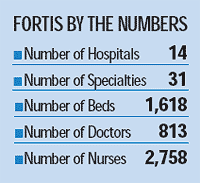 Ditto, for Shivinder, who is a Non-Executive Director on Religare board. Between the three of them they make the core team that forms some sort of a promoter council, which meets at least a month on strategies and is on the phone regularly, often several times a day. “Our wives are sometimes jealous,” says Malvinder. The second-tier of management, too, is getting built gradually. “If a company can provide challenging and better work environment, then why would people not want to work for it?” asks Shivinder.

These non-Ranbaxy businesses are truly the test of the business acumen of the Singh brothers. Across the group companies, the ownership of the brothers is equal, though mostly held through holding companies. While Religare and Fortis Healthcare were started during the late Parvinder Singh’s time, they acquired scale and sustainability only in the past few years. “Ten years ago, we were pretty much a family that was only in pharma. So yes, Shivinder and I have expanded it to the next level, got into healthcare and financial services,” Malvinder says with some obvious pride. Therefore, it will be some feat if Brothers Singh are able to turn their non-pharma empire bigger than Ranbaxy.

Shape up or ship out